Snapchat may be best known for its "ephemeral" messaging, but the company is experimenting with a new way to share live events. Just hours before the World Cup final between Argentina and Germany, all Snapchat users were given access to "Our Story" — a collection of curated Snaps from users in Brazil. The continuous stream of Snaps is an equally surreal and exciting way of experiencing an event. In a way, the masses of unknown faces allow you to live vicariously through World Cup visitors. However it makes you feel, it's clearly a new way of viewing a live event that's entirely discrete from both traditional media (like television) and other forms of social media like Twitter or Instagram.

This isn't the first time that Snapchat has experimented with "Our Story" — it tested the feature during the Electric Daisy Carnival (EDC) music festival last month. Unlike last time, however, Snapchat is sharing this Story with all of its users. To view the EDC "Our Story," you had to opt-in by adding a user to your friend list. The mysterious appearance of a Story in users' feeds has caused some confusion — plenty of users on Twitter have no idea what the "Brazil Final Live" Story is.

Snapchat has confirmed to The Verge that this new feature is being controlled and curated on its part. In addition, representatives say that the company did not promote the feature in Brazil to encourage users to post to the Story. Instead, it seems that users have picked up on it themselves. 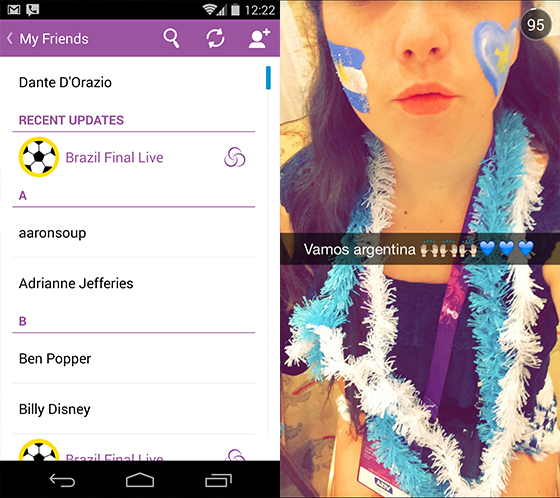 While "Our Story" has an opportunity to expand Snapchat further beyond user-to-user messaging, the company undoubtedly sees the feature as a way to monetize the service in the future. As we reported just this past week, "Our Stories" could easily be sponsored by a major brand like Red Bull, or event organizers like the NBA could pay Snapchat to have a communal story created for events like the Finals. That's all in the future, however: for now, it seems Snapchat is just testing the waters.