Share All sharing options for: Company says it's created the world's blackest black with carbon nanotubes

Black may not be, it turns out, the darkest shade — at least not black as we know it. British tech company Surrey Nanosystems says it's developed the world's blackest material: made of carbon nanotubes, it can absorb 99.96 percent of light that hits it. Its developers say that to the human eye, the material — called Vantablack — completely erases any features on a surface, becoming simply a void. "It's like black, like a hole, like there's nothing there. It just looks so strange," chief technical officer Ben Jensen tells The Independent. That's because the dense coating of carbon nanotubes, rolled sheets of carbon atoms like the one seen above, are used to create a lattice that absorbs virtually all light as it's refracted around the tubes. 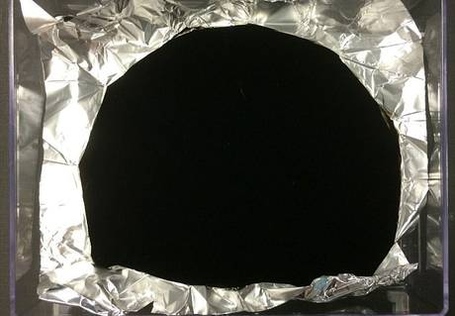 Super-black carbon nanotube coatings are used in telescopes and other instruments that need to operate without any kind of noise from reflected light. Back in 2010, NASA announced that it was assessing whether its own carbon nanotubes should be used to coat the Ocean Radiometer for Carbon Assessment, which measured ocean color and had to be covered in black paint to prevent contaminating the results. The explanatory video below introduces the concepts that underlie it and Surrey Nanosystems' technology.

Besides the color, one of the most important issues is how well the material can stick to the objects it's trying to blacken, and how versatile it is. Surrey Nanosystems says this is one of the major differences between Vantablack and similar coatings: unlike many others, which have to be heated at several hundred degrees Celsius, it can be applied at low temperatures. This makes it possible to use the nanotubes on objects that might melt with a traditional process. The company is also claiming that it's set a new record for light absorption. To people looking at the coating, though, it might not be a completely new experience. NASA's super-black surfaces absorbed 99.5 percent of light, and in 2011, researchers used nanotubes to make an object virtually invisible against a black background.