'Fallen London' gets even bigger

The nightmares won't go away. It's been a few days out here in the vast darkness of the sea, and I've started hallucinating about bats and other terrors. Meanwhile, my crew is scared, we're running low on fuel, and I've had to switch off the lights to avoid the prowling giant crabs. At this rate, I'm not sure if it's the monsters that will be the end of us or if we'll simply starve to death, but it turns out to be neither: a mutiny takes down the ship in a sinking blaze of glory. Better luck next time.

The bleak-yet-charming Sunless Sea only recently launched on Steam, but the RPG is the continuation of a universe that's been going on for years. It's the follow-up to Fallen London, a text-based browser game that takes place in a London that has literally fallen onto the shores of dark, ancient sea nestled right next to hell. It seamlessly blended the macabre with a delightful sense of humor, utilizing stellar writing in place of actual graphics. And it turned into a hit, praised by the likes of the New Yorker, and it's still running today.

Sunless Sea is a very different game than its predecessor, but it takes place in the same world and captures that same unique feel. "The particular blend of playful menace works together like chili and chocolate," says Failbetter Games CEO and creative director Alexis Kennedy.

If you never played it, Fallen London is perhaps best described as an interactive choose-your-own adventure tale. You start out by building a character — I'm a shadowy thief who deals in secrets — and you go from there, following story branches that lead you in unexpected places around a bustling gothic reimagining of London. You can upgrade your dwelling, collect items, and go on various missions that only open up when you unlock new skills. And the whole thing is portrayed almost entirely through colorful text, with a few small thumbnail images to help your imagination along.

Surrounded by nothing but the blackness of the sea

Sunless Sea features a similar setup, letting you create your own ship captain by choosing a backstory and life goal. The game has you exploring the uncharted sea — playfully known as the "unterzee" in the Fallen London universe — where you'll encounter everything from bandage-wrapped undead in search of a ride to giant sharks trapped in medieval torture devices (if you manage to kill one, it's a great way to keep your crew fed). A lot of this plays out just as it does in Fallen London — you'll navigate charmingly old-school menus to choose your path through the world, and the story and dialogue unfold via text.

The biggest change is that Sunless Sea has actual graphics. Exploring the unterzee means navigating your tiny ship across a vast expanse of darkness, viewing the world from an overhead perspective. It looks a bit like you're pushing a toy boat around a beautifully detailed, wonderfully spooky map. Flocks of bats will occasionally swarm by, and each of the many islands you'll encounter look gorgeous, many bathed in a strange, pulsating light. At times you'll find yourself surrounded by nothing but the blackness of the sea, and it actually creates a surprising sense of terror, especially if you don't know where the next port might be. There's even a primitive turn-based combat system that has you trading cannon fire with other ships and strange giant crabs. 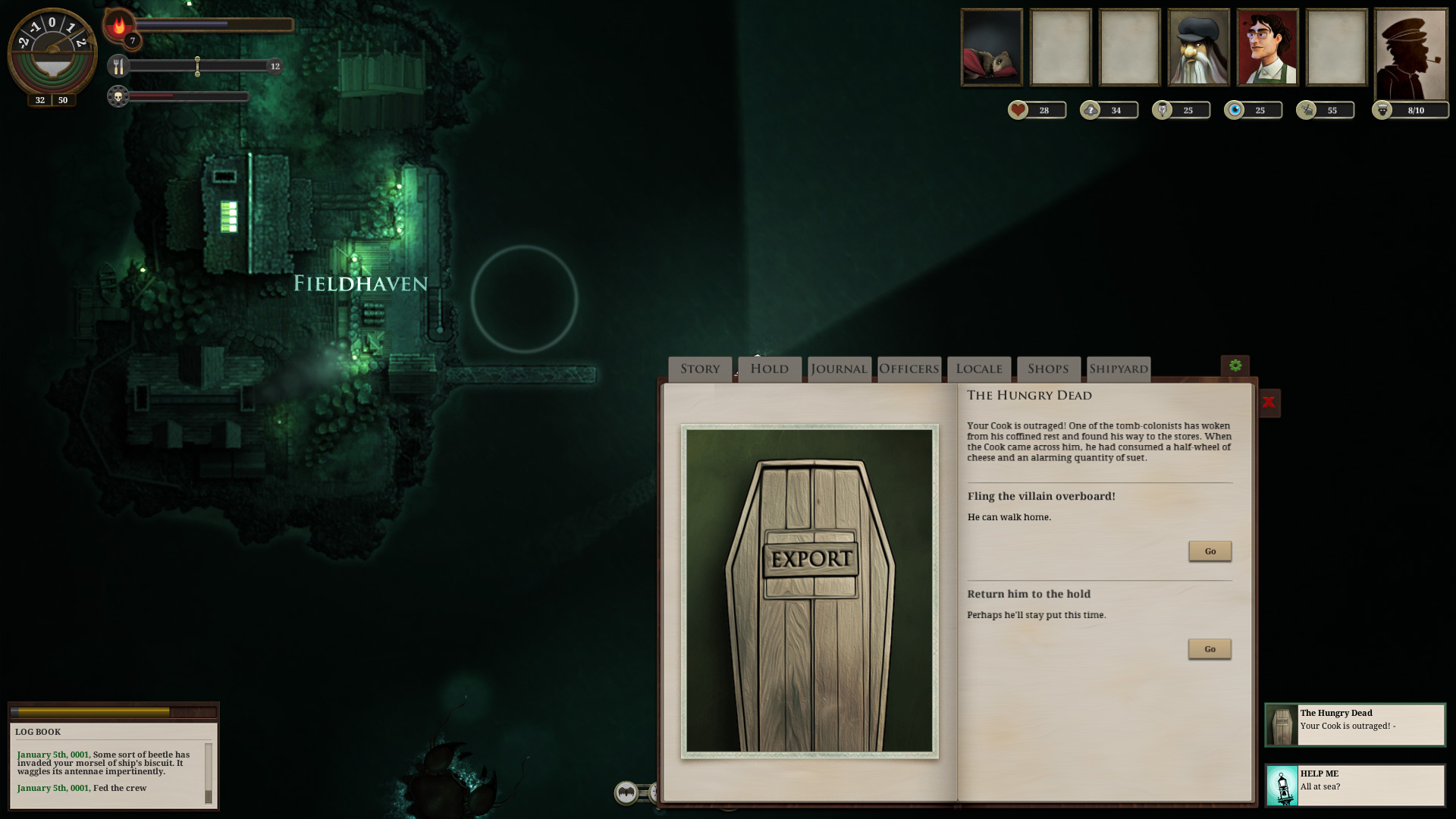 Aside from the striking new visuals, the biggest different between the two games might just be the way the stories are structured. Fallen London is all about building up a character and embarking on a long-running adventure, while in Sunless Sea you'll die often and start over again each time you do. This creates an addictive loop where you try to outdo yourself each time you play, reaching new areas of the map or unlocking new story arcs before you succumb to hunger or a giant shark. It instills every decision you make with a greater sense of importance: one small mistake can lead to death, undoing all of your hard work (although you can carry some things over from one playthrough to the next, including a very helpful map of everywhere you've been). Altogether, Sunless Sea is a wonderful update to the original game.

But that wasn't always the plan.

When Failbetter first launched Fallen London, the hope was to create a new wave of excitement in text-based games, not to build a new franchise that would span multiple titles. The studio even launched StoryNexus, a portal for interactive fiction titles, but it didn't quite take off the way the team expected. "From the start, it was the setting and the tone that people loved, not the mechanics," Kennedy says of Fallen London. Following the game's release, the studio tried a few other projects set in different worlds, but nothing caught on quite like the ruined vision of a London literally gone to hell. A Fallen London comic was launched, and in 2012 the studio successfully crowdfunded a prequel to the game called Tales of Fallen London: The Silver Tree.

Sunless Sea is easily the most impressive spin-off yet. Not only is it a much more robust game, but it's also Failbetter's first attempt at an experience that isn't free-to-play — Sunless Sea is currently available in beta form for $18.99 through Steam's "early access" program. "It's like learning to fly," Kennedy says of releasing the new game.

And the studio shows no signs of stopping: Sunless Sea is constantly receiving new content, including a forthcoming update that adds submarines, and a mobile version of Fallen London is also in the works. The studio is even entertaining the possibility of novels, and is looking at a survival game spin-off set in one of the city's more dangerous districts. "I said at the beginning that Fallen London runs on love, not money," says Kennedy. "And as long as we can eat, we want to do the fun projects."