DisasterCon: how a fan convention’s big dream became a nightmare

Share All sharing options for: DisasterCon: how a fan convention’s big dream became a nightmare

At a hotel in Chicago’s suburbs, a room full of people have been waiting over an hour to see the creators of beloved surrealist podcast Welcome to Night Vale. When an organizer says they left after not getting paid, a cry of disbelief runs through the audience. She tries to bring the crowd together in a collective sigh of frustration. "Give me back my money!" one man shouts. And another piece of DashCon 2014 falls apart.

Originally called Tumbl-Con, the fan convention was supposed to bring the Tumblr community together, even after it changed its name to make clear that it had no affiliation with the site. With the help of volunteers from a range of fandoms, it rented out a convention center and set up three days of panels, including appearances by the likes of the Night Vale cast and actor Doug Jones — also known as the eyeless monster in Pan’s Labyrinth. By the time it ended, though, it was accused of being everything from an outright scam to an example of how well-meaning fans can let a project spin disastrously out of control… and land in a half-deflated ball pit.

Attending DashCon was never going to be cheap — a Saturday badge cost $45, as much as a pass for the massive San Diego Comic-Con — but the organizers estimated that this would cover the cost of starting an all-new convention. On Friday night, this obvious plan went horribly wrong. At 9PM, the organizers claimed that because of a sudden change of plans with hotel staff, they had to raise $17,000 within an hour or shut down the convention. Amazingly, they managed to raise funds in half that time — one person later said they donated $360 on the spot. DashCon staff said they could work out reimbursements, but the money problems were just beginning.

She spent the night on the 'Night Vale' team's Airbnb sofa

After the Night Vale panel was called off, guest webcomic artist Noelle Stevenson discovered secondhand that she would be paying her own hotel bill, after having to moderate her own panel. She ended up sleeping on a sofa in the Night Vale cast’s Airbnb rental. Sherlock Holmes podcasters the Baker Street Babes pulled out of the show for the same reason. One vendor reported packing up because of low sales. Organizers tried to compensate people who had paid to see the Night Vale reading, but they did so with raffle tickets, a chance at attending a concert that night, and "an extra hour with the ball pit" in the concessions room. Three days later, that tiny, lonely ball pit lives on as the most enduring legacy of DashCon 2014.

Unsurprisingly, Tumblr was filled with questions, suspicion, and vitriol. Some people wondered why the hotel would change its terms in the middle of a convention. Tumblr author Hythe, who has spent the past few days intensively reporting on DashCon, said that attendance looked far lower than the organizers had projected. Critics cast suspicion on a "partnership" with charity Random Acts, which later said it had only approved a fundraiser, not agreed to any kind of joint project. "We were only recently made aware of DashCon using the term ‘partnership’ regarding this event, and asked them to remove it as soon as it was brought to our attention," marketing manager Melissa Dark tells The Verge. "As of now, we're not aware of the status of any funds that may have been collected (or, indeed, if any were)." 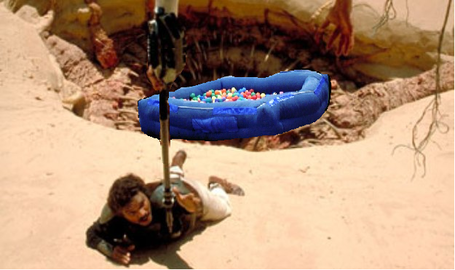 On Saturday, organizers began the process of explaining the whole ordeal. Originally, they said, they had worked out a plan to pay over the course of the weekend using money from walk-in passes. Then, one of the administrators was "unexpectedly pulled into a meeting with higher-level hotel staff" and told that they had to come up with $20,000 or shut down the event. It’s not clear exactly why (or even if) that happened, except that it was "largely due to a miscommunication within hotel staff." A photo of a letter apparently on hotel stationery, dated the day after the collection, attested to the fee.

"We worked closely with DashCon on the contractual understandings."

With most identifying information whited out, it raised suspicion on Tumblr, and the hotel has stayed almost entirely clear of the controversy. In a phone call, general manager Lisa Timbo declined to say whether the Renaissance had asked for money, whether the letter was accurate, or whether a deal like the one DashCon cited was standard procedure. "We worked closely with DashCon on the contractual understandings that we had in place, and we very much enjoyed having them here on the property," she said. "The billing protocol that we had established was contractually written and was mutually agreed upon." 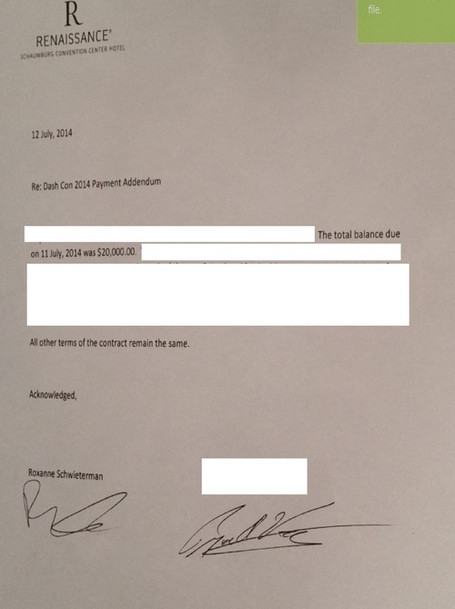 It’s possible that the letter was a scam or even a last-minute attempt to save face, but the evidence points to genuinely motivated people whose project vastly outstripped their planning abilities. One Tumblr owner, who said she’d volunteered for DashCon, posted a series of Skype conversations that suggested confusing, poorly organized, and wildly overambitious management. The new, relatively tiny conference at one point reportedly wanted to host a panel with Misha Collins, the high-profile fan favorite from Supernatural, as well as the actor who played Draco Malfoy.

After the initial backlash, DashCon began to look a little better. Some attendees admitted there were problems but refuted early, negative rumors — even the ball pit. "The ball pit largely stemmed from a joke," said panel guest Mark Oshiro. "It was not a point of interest, it wasn’t something a single soul talked about, and it was just a quirky thing that existed. … In order to support the idea that DashCon was a full, 100 percent disaster, every single detail was used to paint the con and the people at it as horrific failures of humanity."

"You all deserve a real explanation."

After speaking to a lawyer, the Baker Street Babes wrote that DashCon called the billing incident a mistake and was settling it, though Stevenson said she was still waiting. In a corrections post, Hythe dispelled some likely misinformation. The DashCon staff didn’t reply to a request for comment, but they’ve promised more details in the coming days. "Just please bear with us while we put together something eloquent, accurate, and informative," said a Tumblr post. "Jumping to ‘defend ourselves’ is not the answer here. You all deserve a real explanation, and we’re more than happy to provide it."

Few dispute that DashCon was a fiasco, though we still don’t know precisely why. But as the inevitable (and sometimes deserved) insults mount, Stevenson, Oshiro, and others worry that the debate could become more about mocking fandom and the people who enjoy it. "Why doesn’t Tumblr just come out and say they want a chance to rip on teenage girls?" wrote Oshiro. And even as she talked about the convention’s "hilariously poor planning," Stevenson defended the idea. "[People] mocking aspects of DashCon like cosplayers, vendors, panels about fan fiction, etc.: have you never heard of a convention before?"