Sling launches its smallest and cheapest Slingbox yet

Sling launches its smallest and cheapest Slingbox yet

The M1 adds Wi-Fi and replaces the Slingbox 350, while the Slingbox 500 gets smart TV functionality later this summer

Sling, the company that makes your cable or satellite service available anywhere you have an internet connection, is today announcing the Slingbox M1, its smallest and cheapest set top box to date. The $149.99 M1, available on July 20th, is notably smaller than the $179.99 Slingbox 350 it is replacing, yet it doesn't give up any functionality to its larger predecessor. In fact, the M1 offers Wi-Fi connectivity, which the 350 lacked, making it easier to set up and locate in your home.

The basic premise of the Slingbox M1 remains unchanged, however. It plugs into your cable or satellite box through component or composite cables (no HDMI, due to copyright restrictions) and then makes your TV service and recorded programs accessible through Sling's mobile and desktop apps. Sling offers apps for iOS and Android, as well as desktop apps for Mac or PC. I was able to watch the World Cup final from my porch using Sling's iPad app, though I could have also done that from a bar or a hotel room hundreds of miles away.

The Wi-Fi capability of the Slingbox M1 makes set-up much easier than before — I was able to plug it in and set it up on my home network in less than ten minutes using the Sling iPad app (it can also be set up with the desktop apps or used with a wired connection like the 350). Since the M1 doesn't require an ethernet connection, I didn't have to route a long wire from the router in my upstairs office to the entertainment center in my downstairs living room, as I would have had to do with the older model.

Nor did I have to deal with an ugly IR blaster taped to the front of my cable box — the M1 has a powerful enough IR emitter that it was able to bounce the signal off the walls of my living room to control the cable box. The M1 itself is smaller than the Slingbox 350, though it is larger than an Apple TV, Amazon Fire TV, or Roku 3. It shouldn't have any issue tucking into the average entertainment center, however.

In addition to rolling out the Slingbox M1, Sling is also announcing a rebranding and forthcoming software update for its flagship Slingbox 500. The newly-named $299.99 SlingTV will replace the Slingbox 500, though the hardware will remain exactly the same. The software update, which is due to roll out in late August and is free for existing Slingbox 500 owners, adds smart TV-like functionality to the Slingbox, with apps, program listing information, movie ratings, sports scores, and more. It essentially replaces your cable box's interface, similar to the Xbox One. 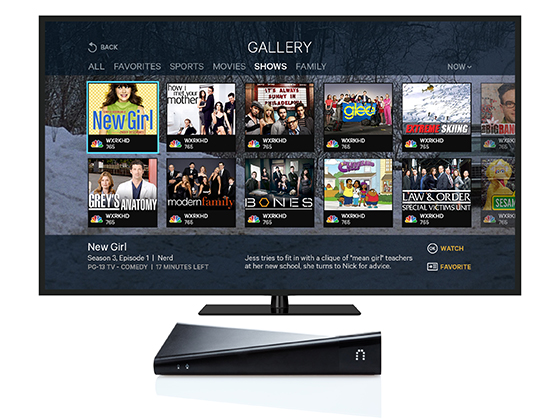 SlingTV can recommend programs based on reviews, popularity, and social network activity. Apps included at launch are Blockbuster Video, a DIsh TV app, and an app to browse content stored on an external drive. Crucially missing are Netflix, Hulu, and Amazon Instant Video, though Sling says that it is working to bring more apps to the platform as soon as it can.

Sling occupies a unique space in the set top box world: unlike the Apple TV or Roku boxes, which cater to cord-cutters, Slingboxes work best when you have existing cable or satellite service. As consumers rely more and more on internet sources for their television needs, Sling will have to adjust and adapt to the changing market. After all, if the market for cable subscribers shrinks, so does the market for Slingboxes. Sling also faces competition from the increasingly powerful apps provided by cable companies themselves, many of which let you stream a limited number of channels to your mobile device anywhere you have a connection. Moreso than the Slingbox M1, SlingTV feels like a step towards the future — it will be interesting to see where the company goes from there.