So I was on my commute today like every other day this morning, on Chicago's public transportation into the heart of the city. I sat down to wait for the train and saw a guy beside me on the bench with a Moto X, and I thought, "Cool, he has a Moto X as well". The train came and we got on it, I took a glance at his wrist and....

That was me when I saw that it was a Moto 360! I was fangirling as quietly as possible, but he knew instantly. So I talked to him for a while, and found out that he was a Motorola employee heading to the Motorola HQ in downtown Chicago. He was a awesome guy that seemed to enjoy having a conversation with me. Here's a couple of things I noticed looking at it.

- Yes, its every bit as gorgeous as it is in the pictures. Forget about it being a good looking smartwatch, its one of the best looking "watches" period. He had black on black, and man did it look sexy. I initially thought the silver might have been the one to get. But rest assured, whichever one you choose, it will be gorgeous. I also actually really like the bezel area at the bottom of the watch. Call me crazy, but I don't know why. I know it serves a functional purpose to house the display components, but I also think it adds to its signature as a smartwatch. I wouldn't mind if others took this approach.

- The size is perfect. This is what made very happy. It's definitely not big by watch standards, and it also isn't too small and cramped. It definitely seems like they put a lot into researching the right size, because it looks spot on. Its weird because later in the day I started looking at other regular watches on the train, and for the most part couldn't find anything smaller than the Moto 360. Most watches were usually bigger. So overall, this is a great watch size.

- Display. The display looked great. I couldn't get too close because I didn't want to be more of a weirdo than I probably was already being. But It seemed to light up whenever he would lift his wrist to look at it.

I asked him a variety of questions and he tried to answer it the best he could. English wasn't his first language, so he didn't explain in great detail

- How does it charge?
He didn't say exactly, but he said that it uses wireless charging.

How's battery life?
He said it was great. He's only had it for about a week, but he hardly charged it during that time span. Leading him to say that the battery kind of works like the moto X. He didn't say exactly what he meant by this, but as a moto x user, I think its safe to say that it uses the same display technologies of the X. Amoled screen, that lights up when lifted or a notification comes in, much like the moto x. Thus saving additional battery that other smartwatches on the market probably are wasting. If true, I think its also safe to say that the Moto 360 will have the best battery life of all Android Wear watches. 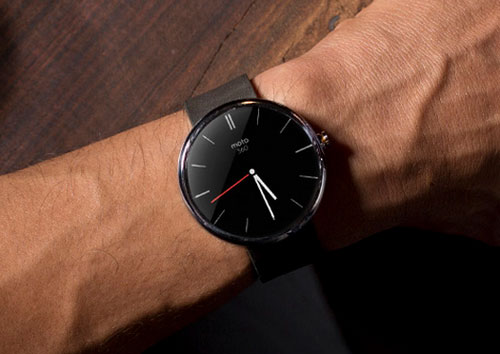 This is basically what he had, black on black. And his watchface also had this clock style. Leading me to believe that Motorola chose the black watchface as the standard style because it consistently saves as much battery as possible with its amoled screen, even when its showing the time.

- When does it release?
He just told me summer. I tried to get more out of him but he wouldn't budge. He told me he genuinely didn't know. It may have been a lie. But the fact that he said he has only had it for about a week, makes me think that they gave it to all employees about a week ago. Meaning that we're probably really close to a release date.

- Price?
He also said he didn't know either. I don't think that he his position in motorola has anything to do with pricing or release/shipments, etc. He seemed to know alot of the technical working of it, but none of the other stuff.

Well, thats it. A part of me was disappointed that I didn't ask more questions. I was just so awestruck with the design of it, that I just kept staring without really asking all the things I should've asked. But I think I did decent enough for not being prepared. I didn't know if I would actually purchase this when it releases. But after seeing it in person, I know that no matter how good of a "smartwatch" it is (which I think it'll be great as), its also just an elegantly designed "watch". And as a person who doesn't really have any watches, that alone is a bonus. Feel free to ask any questions on the Moto 360, i'll try to answer it as best as I can.

I saw him again this morning. This is only the second time i''ve taken this route this summer, so i'm guessing that's why i've ran into him twice now. I was simply trying to get to my destination on time, and totally forgot about seeing him yesterday when I took this route again this morning.

Not much more information to give, he just talked about how he enjoyed working in motorola, and a general conversation about life and the city.

I did try to get more things out of him though.

I wanted to know if they would be shipping it with the Moto X2, and if that was the reason for the delay. I knew he would just say "I don't know" if asked directly, so I stated it in a suggested fashion. And he simply responded with "That's an interesting suggestion". You can read into that however you'd like.

- Creation of the watch.
He did explicitly state that it's much more difficult to make a round watch than a square one. Supporting my thought that he probably works in the technical aspects of the Moto 360. Let's not take for granted what Motorola has done here with its round design. There's a reason why Samsung, Lg, even the rumored apple smartwatch, are square (or rectangular). Its just easier.

- Advancement.
He stated that he was using an earlier model. And that the watch that will be released has been improved since then. Given motorola's history, i'm willing to bet that they've refined the watch through testing for even better battery life than he probably has on his pre released model.

That's it. I was REALLY tempted to take a picture sneakily. Lol, but my conscience got in the way.

I'll tell you guys what, on the off chance that I see him again, let me know of good questions to ask (that I haven't already). And i'll do my best to try to ask them.