Jawbone's Up bracelet has become perhaps the industry's most versatile fitness tracker, thanks to powerful sleep and activity monitoring. For its next act, Jawbone is turning its focus to weight loss — more specifically, to food. Eating right is an obviously crucial part of getting and staying healthy, not to mention the one that's typically most overlooked by the bracelet-wearing health junkies of the world. So Jawbone is releasing an update to its app, Up 3.2, which aims to make it easy to track what you eat — and to eat a little better as well.

First, there's a revamp in food logging itself, previously a tediously manual search-driven process that Jawbone's Travis Bogard tells me led too many Up users to simply give up trying at all. The new app tackles the problem in a few ways: for one, it groups together foods you might frequently eat, so when you log "bagel," "cream cheese" and "coffee" might appear in the menu ready to be logged.

Jawbone always tracked food, but now it does it right

If you go to Starbucks or Chipotle or any other national chain, the Up app now shows the whole menu – logging your food is as easy as picking what you wanted to order. (The company is essentially crowdsourcing this data for smaller restaurants, hoping diners will ask for and input nutritional information themselves.) And in the most potentially powerful part of the new Up strategy, Jawbone is partnering with a handful of delivery services to automatically log your food as soon as you order. They're small and mostly localized to San Francisco for now, but these partnerships could eventually include everyone from Seamless to FreshDirect to Walmart. The idea is to make logging food easier, and eventually to make it happen entirely in the background. 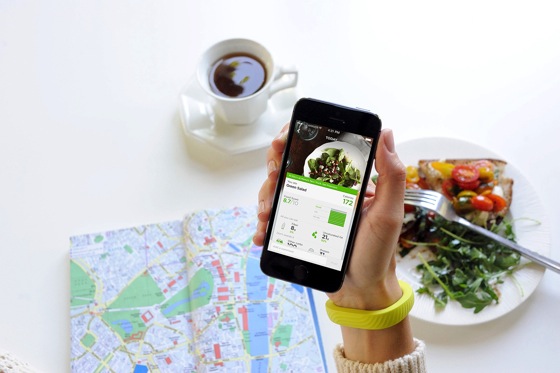 Logging your food is a power-user activity, for the hardcode Up user. Jawbone's ability to show you how to eat better, on the other hand, should have wide appeal. The new Up app introduces a new "food score," an intentionally rudimentary number designed to boil calories and sodium and sugar and carbohydrates down to something like a single measure of how good a food is for you. The hope, Bogard told me, is that people will use the Up app to compare between types of Cheerios to buy the healthier kind, or will learn to opt for a fruit instead when the low score pops up next to the Skittles box. Jawbone's helpful push-notification Insights helpfully reminding you to eat more fiber will help the cause too.

Eating right is hard, Bogard says, because the right thing isn't always obvious. He hopes to address the 76 percent of Up users who have set weight goals in the app, who are trying to pair activity and sleep with a healthier diet. But he's also excited about the Up users who will find small truths about which Chipotle tortilla to get, or how much worse yogurt is when there are fake blueberries mixed in. Eating right is about making a lot of little decisions, and Jawbone's getting really good at helping you make the right one.