The scuba diver social network that could save your life

Share All sharing options for: The scuba diver social network that could save your life

For divers swimming hundreds of feet beneath the ocean's surface, communication is a notorious challenge. Crews have developed an extensive language of hand signals to express their needs, but they're hampered by one obvious caveat: the signals rely on people looking at each other. A flat hand making a cutting motion at a throat to indicate "I'm running out of air" is no good if your dive partner is distracted by a shoal of fish. Such challenges help explain why suffocation is the leading cause of diving fatalities, alongside being trapped in underwater caves or wrecks and equipment defects.

But improving underwater communication is hard. Electromagnetic waves, used in surface communication networks almost exclusively, fade out over long ranges in salt water, meaning that sound waves need to be used for data transmission instead. Hydrophones, essentially microphones designed to be used underwater, were developed in the early 20th century by noted physicist Ernest Rutherford to communicate with submarines, and both the US and Russian Navy have hydrophones installed in seabeds, connected by cable to land stations. But sound waves have very limited bandwidth, which means low data transfer rates compared to terrestrial communication.

All of which means that recreational divers don't have much in the way of foolproof communication. Now, a Swedish startup called Aqwary hopes to change that. The company has developed a new approach to underwater communication: allowing divers to create ultrasonic, subaquatic networks that passively share information like their location and air supply status.

"It allows you to be more alert about what's happening around you," explains Anders Brodin, the company's founder and managing director, in an interview with The Verge. He came up with the concept while diving with his kids and worrying about the state of their air supply. "I realized that there has to be a technical solution that could help me do this," he says. The result is the Smart Console, a palm-sized unit with a 3.7-inch OLED display that connects to your air tank with a thick rubber tube.

"It's basically a small computer designed to withstand 50 meters [164 feet] of depth," Brodin says. "It's integrated with your air supply, so you see how much gas you have left in your tank, and it also has all kinds of sensors." Those include a magnetometer, accelerometer, external temperature sensor, depth meter, and air pressure (to measure the amount of breathing gas left in the tank), internal pressure, and internal temperature sensors.

But the most notable feature of the Smart Console is that it also communicates with any other unit nearby through four ultrasonic hydrophones. On its screen, you see the name, position, depth, temperature, and air supply status of up to 70 other divers within 328 feet. If any run low on air, an alert is sent over the network and to a boat on the surface. If they get trapped underwater, they can broadcast a distress signal manually. 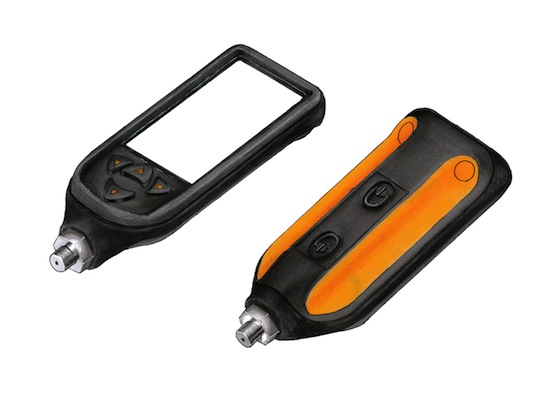 A mockup of the Smart Console. (Aqwary)

Each diver's signals are sent over ultrasound. "If you're old enough to remember the old-fashioned modems you used on your telephone line, it's pretty much the same basic technology," Brodin says. Those sound waves are modulated, sent through water, and then demodulated by another unit. This type of underwater communication has a theoretical range of around 3.7 miles, but the Smart Console has a shorter range of just 328 feet. The reason is battery life — "We have designed it so you can get 10 hours of usage out of the unit," says Brodin.

Save your dive data to the cloud

But battery life isn't the only concern when you're blaring out high-pitched noises across the sea floor. Many marine creatures, dolphins included, use ultrasound to communicate and locate prey, and there are fears that noise pollution associated with human activity underwater is disrupting marine life. Brodin says they've seen no evidence of any adverse effects on animals from the Smart Console: "When we did the first trials in early 2013, we spent time trying to annoy fishes at the reefs with it, and they didn't react at all. You could almost poke it at them and they wouldn't react."

Underneath the rather utilitarian waterproof exterior, the Smart Console has 32GB of memory, a 536MHz processor, and built-in Wi-Fi to save your dive data to the cloud. It's also equipped with an app store, where divers can download digital compasses, more advanced dive computers, and dictionaries of fish and dive sites. Unfortunately, it's not open to third-party developers because the device is "classified as personal protective equipment," Brodin says. "That means we have to be careful that we don't get code in there that would somehow risk people's lives."

"They asked us if we could play movies or show Netflix on it."

The apps available were chosen by beta testers, and one of the biggest requests from users was something to do during decompression. When you dive deep, you have to stop on the way up for 15 to 20 minutes to avoid decompression sickness, commonly known as "the bends." "Right now one of the developers is working on a version of Snake," Brodin says. "They asked us if we could play movies or show Netflix on it, but unfortunately we don't have the bandwidth." Nor can you tweet from the bottom of the sea just yet — the devices can't connect to the wider web from below the waves. But that may change, Brodin says. "That's actually in the makings for something we will launch in a year from now."

The company will ship its first orders in July, with the unit running around $800 USD. Ultimately, Brodin hopes that the Smart Console makes diving safer. "Having full access to your buddies' data will support your decisions during the dive to make sure that you keep within limits," he says. With studies showing that diving is 40 to 60 times more dangerous than driving a car, perhaps the Smart Console will make the sea a safer place to be for those who want to experience its beauty first-hand.