Amazon is working on Kindle Unlimited, the ultimate subscription service for readers

Share All sharing options for: Amazon is working on Kindle Unlimited, the ultimate subscription service for readers

Amazon is planning to launch the ultimate subscription package for book lovers. As first reported by GigaOm, the company is apparently preparing a new offering called Kindle Unlimited, which will provide "unlimited access to over 600,000 titles and thousands of audiobooks" for $9.99 each month. Amazon has yet to unveil Kindle Unlimited in any official capacity, but users spotted promotional banners for the unannounced service on the retailer's website. It seems you'll be able to access Kindle Unlimited content from "any" device that already supports Amazon's Kindle ecosystem. Currently that includes iOS, Android, OS X, Windows, Windows Phone, and obviously Kindle Fire hardware. 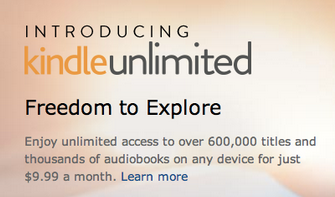 The relatively modest number of ebooks cited by Amazon suggests that major publishers may not yet be supportive of the subscription approach. But titles that come from Amazon's own imprints and those included in the Kindle Owners Lending Library — a perk normally reserved for Amazon Prime subscribers — are listed on what looks to be an early test page for Kindle Unlimited's catalog. As for audiobooks, Audible currently has a library of over 150,000 titles; Amazon says it will make "thousands" available on an unlimited basis, but we don't yet know just how large that number will be. The company is unlikely to be too generous with audiobooks, since Audible already charges significantly more than $9.99 each month for listening privileges, and those aren't even unlimited.

Should Amazon move forward with the plans, it will have a subscription service for nearly every form of consumable media: movies, TV, music, and books. Most require customers to shell out for the annual Prime fee, but it seems Amazon may be exploring a different path here. There are obviously plenty of unknowns (i.e. timing around new releases and publisher support), but Amazon may finally be ready to give readers the subscription service they've been waiting for.