Hodor is going on a 'Game of Thrones'-themed DJ tour

Share All sharing options for: Hodor is going on a 'Game of Thrones'-themed DJ tour

You might not expect Hodor — or most characters from Game of Thrones, for that matter — to be down to party, but it turns out that he wants to bring you over to Westeros for an intense night. The actor who plays Hodor, Kristian Nairn, has worked regularly as a DJ for over a decade, and he's about to go out across Australia on a Game of Thrones-themed tour that's being called Rave of Thrones. Westeros-style dress is required at all locations, which themselves will be decked in matching visuals inspired by the show. Apparently, each night will also have some special guests.

"Some of the deepest house from all seven kingdoms"

The six night tour will roll through Sydney, Brisbane, Perth, Melbourne, Darwin, and Adelaide. If you're into EDM, you may just want to go: Rave of Thrones promises that Nairn will be playing "some of the deepest house from all seven kingdoms." And by all means, it pretty much has to turn out better than the last Game of Thrones-inspired musical effort. 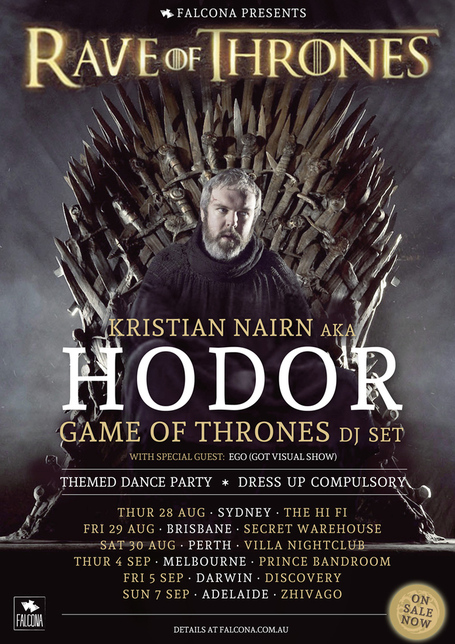