Getting your football fix will be slightly easier in 2014, so long as you're willing to pay for it. For the upcoming NFL season, DirecTV is introducing NFL Sunday Ticket TV, a streaming service that will let certain fans — even those without a satellite cable package — watch every out-of-market game each week. But where you can watch depends on how much money you're willing to give DirecTV, and anyone hesitant about forking over at least $300 faces a tough decision. 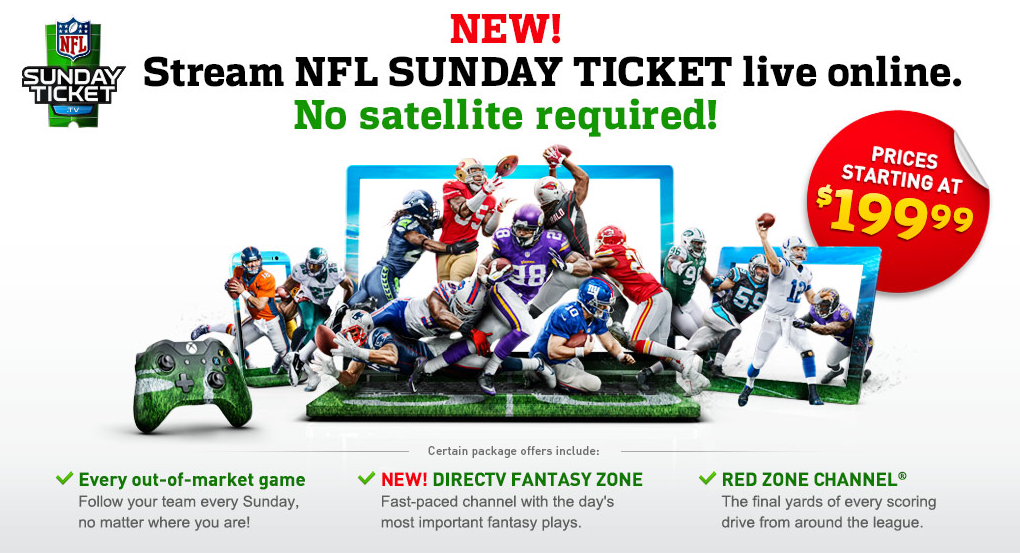 Sunday Ticket TV isn't quite the streaming football service fans have been dreaming of. Nor is it really targeted at cord cutters. But it does provide some new, cheaper ways to watch. First, there's a $199.99 "Digital" tier that offers access to live games on your computer, smartphone, or tablet. Want to watch on an Xbox or PlayStation? You'll need to pay slightly more ($239.99) for the "Console" tier. Here's the terrible part: choosing console means you won't be able to watch on your phone or laptop, and vice versa. To have everything, you'll need to subscribe to a $329.99 "Max" package that also adds perks like the Red Zone channel and DirecTV's new Fantasy Zone, which provides live highlights of plays involving anyone on your fantasy football roster.

Get friendly with apartment dwellers

That's the same price DirecTV's paying satellite customers are charged for Sunday Ticket Max, so you're not getting any discount for the web-only equivalent. Regardless of which tier you pick, Sunday Ticket TV will offer real-time game stats, score updates, and player tracking. Max subscribers get an added bonus: 30-minute game replays that can be watched during the week when there's no live action on the field.

There's another big thing you should keep in mind: NFL Sunday Ticket TV isn't available to everyone. Not by a long shot. Officially, DirecTV is saying it's for people "who live in select areas or residence types, or are enrolled in select universities." Translated more plainly, DirecTV is really marketing this to football fans who are unable to install a physical satellite where they live (i.e. those in apartment buildings) or otherwise receive its service. The company has set up an eligibility checker to determine who's allowed in, and I got shot down hard when submitting my family's home address. My apartment on the other hand worked fine, but entering a friend or relative's building won't fool the system. If you need to change your address for billing, you'll have to go through the eligibility process again. Splitting Sunday Ticket with that apartment friend is a perfectly viable solution, though. So there's always that.

This isn't the first time DirecTV has partly unshackled its prized Sunday Ticket from the satellite dish. In previous years, football diehards have been able to pay a hefty premium to enjoy the service online and on mobile devices. And for the 2013 season, Amazon partnered with the company for a promotional tie-in with Madden that basically gave Sunday Ticket away for free. Now it's all getting somewhat simpler with Sunday Ticket TV and the tiered model. You'll just need to decide where you want to root for your team: will it be digital, console, or both? And don't be surprised about the limited eligibility. DirecTV pays a huge price to carry Sunday Ticket, and clearly it's not quite ready to let cord cutters nationwide in on the fun. But if you're willing to pay, there's probably a way to be ready come game day. Streaming starts September 7th.