A hoodie that lets you hear everything, even with the hood up

A hoodie that lets you hear everything, even with the hood up

Wearing a hoodie and listening to music with large headphones are two things that do not always go together, but one company believes it's solved that problem. San Francisco-based Betabrand has come up with a new hooded jacket that uses "acoustically transparent fabric" to let sound pass through unabated, meaning you can show off your cans to the world and actually hear them too.

As it turns out, the idea behind the jacket is not about making headphones an external style accessory, and instead about allowing sound to come through while the hood is up — even if you're wearing headphones. "For engineers that work with bands on tour, who generally want to be as inconspicuous as possible when adjusting things on a live stage, wearing black is key, hence all the blacked-out trim and fabric selections," explains Steven Wheeler, a designer at Betabrand, who also came up with the company's NASA-inspired down jacket.

Wheeler worked with Nic Pope, an audio engineer at Different Fur Studios in San Francisco, to come up with this particular design. Wheeler says the material the pair ended up using is simply "high-end speaker fabric," which is more commonly used to cover the front of custom-made speaker cabinets in order to let sound, but not dust pass through. 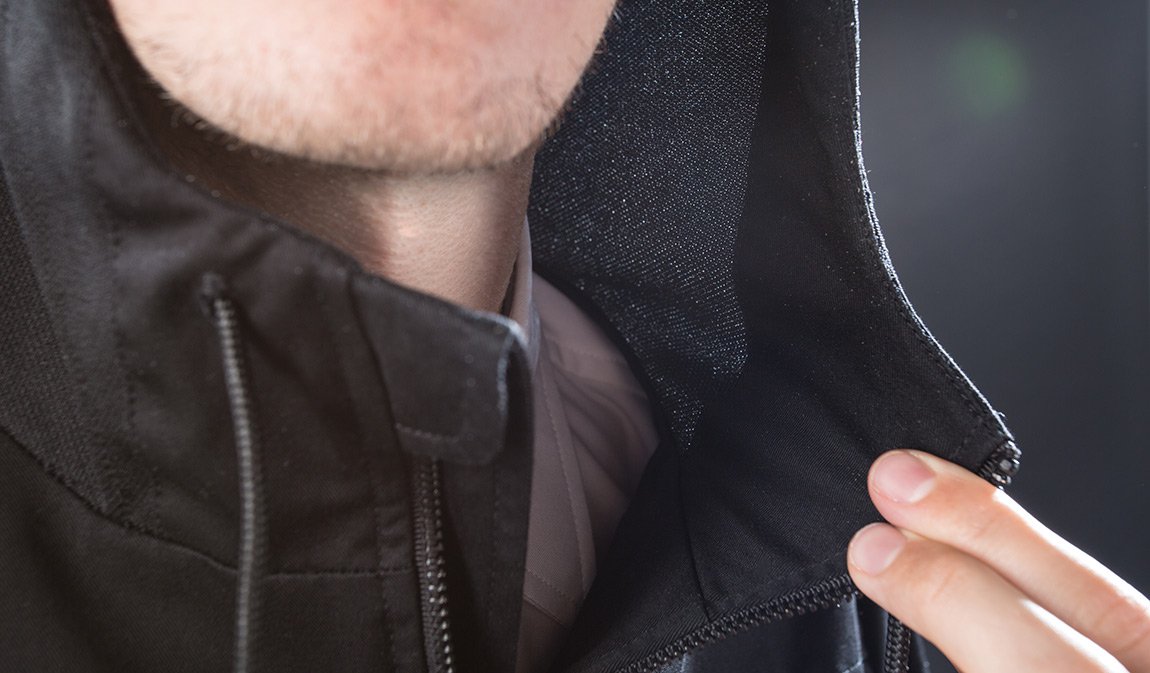 At $158, Betabrand is angling the "hoodie" as more of a jacket with what it says is a "water-resistant" blend. Along with the speaker fabric woven through the hood, the jacket has other special features aimed at audio engineers, like a reference sheet with wiring diagrams that folds into an interior pocket, which also has a loop for routing headphone wires upwards.

The project originated from the company's crowd-funded pool, which lets people submit their own ideas for clothing projects, which — if popular enough — are turned into real products. Early buyers get a discount, similar to Kickstarter. The same process created the dress pant yoga pants, which quickly became the company's top-selling product.

Other companies have tried to do something similar to their own hoodies a few years back by actually building headphones into the hood, but the results were not great. The speaker could be far away from your ear, and move around as you walked. Newer efforts, like the HoodieBuddie use an integrated set of in-ear headphones instead. In the case of large headphones, they're designed to create a small enclosure over your entire ear to isolate the sound, something Betabrand says still works here since the fabric is essentially the same thing that you get in front of a speaker. Even so, Wheeler urges caution.

"Wearing headphones over the hood of the Audio Engineer is like taking photos at a wedding with an iPad; yes, you can, but you'll have to decide for yourself whether or not you should."