These apps might trick you into finally backing up your photos

These apps might trick you into finally backing up your photos

Someday, perhaps soon, you’re going to drop your phone in the toilet. You’ll be pretty upset when you realize how much it’s going to cost you to replace it. What might take longer to remember is how many photos, videos, and screenshots you lost. The insane text your cousin sent you when he was high, the selfie you took at Cape Canaveral, the last photo you took of your dog before he passed away: all potentially lost.

The solution is to make sure those photos are backed up somewhere in the cloud, preferably automatically. There are several existing services that can do it, but they’re alternately annoying and complicated — and so all too often just don’t get used. But two companies think they have found a way to get consumers to actually back up their images to the cloud. The answer isn’t to try to get you to install a cloud backup app next to your photo and camera apps — it’s to replace them.

These new solutions don’t look much like "photo storage" apps like Loom or Everpix, and that’s on purpose. They look more like the Photos app or the Camera app you already use. They’re more relatable, and don’t ask you to consider how to "manage your photos" in the cloud. "Nobody has successfully replaced the Photos app," says Picturelife CEO Nate Westheimer, citing a recent Betaworks study of users’ home screens, so he made it his mission to do so.

The latest version of Picturelife (pictured) for iPhone and Android is meant to supplant your Photos app wholesale. When you boot it up, it reads all the photos and videos you’ve taken on your phone and displays them nearly instantly. There’s no lengthy import process or account-creation screen to worry about. There’s only a neat timeline of your photos. You can use Picturelife as your Photos app, and if you choose, you can turn on backup, which the app offers for free. Picturelife bundles in 8GB of free cloud storage — the size of the average camera roll, says Westheimer. Because Picturelife replaces your Photos app but adds backup as a feature, Westheimer says, people will be more likely to back up their stuff. Picturelife offers unlimited storage for a hefty $15 a month. 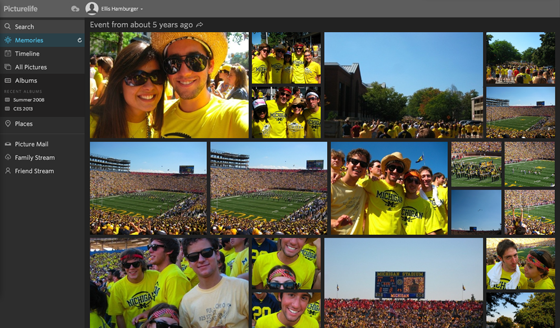 Once the app’s set to back up your photos, you can view them all on the Picturelife website, which is one of the fastest of its kind that I’ve tested. Picturelife is, in fact, not so different from when I last tested it a year ago. It includes a variety of nice features like automatically importing all the photos you’ve posted on Facebook and Instagram for safe-keeping. Westheimer calls Picturelife "the last man standing" in the cloud photo app game, but that’s not entirely true.

A new photo app called Shutter takes Picturelife’s idea one step further, aiming to replace your Camera app. By supplanting both your Camera and Photos app, Shutter hopes to alleviate you from ever having to delete photos you shoot. With Picturelife, conversely, backed up photos will still need to be deleted from your Camera Roll to save space. Shutter also offers unlimited storage for the photos you take on your phone, a real selling point. "Everyone’s shooting 1080p videos and buying 41 megapixel phones," says Shutter creator Jonathan Benassaya, "but you can’t enjoy them." Even if he’s not right that most people have 41-megapixel cameras, he is right that the amount of storage our photos take up is getting too large for the amount of storage on most smartphones.

Shutter is designed to bait you into trying StreamNation, its parent website, where unlimited storage isn’t free. StreamNation lets you upload as many photos and videos as you’d like from your computer for $19.99 a month, but you can still access all the photos and videos you’ve taken with Shutter for free. StreamNation’s two-faced pricing plan is a smart way to reel users into its ecosystem without taking too much collateral damage. StreamNation desktop users upload about 350GB per person, Benassaya says — a far cry from the amount most people will ever upload from mobile. "I think the cloud is something new for consumers," he says. "Even though Dropbox has 300 million users, I don’t know how many of them really use it with more than the free storage offered, and with all their content." Thus, Shutter is designed to get people in the door with its free storage plan, while StreamNation hopes to keep them.

Both services were built to make storing media easier, but it seems they’ve both decided that "storage" isn’t sexy. "90 to 95 percent of content that is stored on a hard drive for consumers is media — it’s a photo, it’s a video or a music file," says Benassaya. Yet, most cloud storage services still look like Windows Explorer. Instead, the two companies are appealing to the average consumer as well as photography hobbyists. Both apps offer a variety of great ways to interact with your photos, like through Memories (Picturelife) and Flashback (StreamNation) which offer a glimpse into the past, or through the EXIF data of your photos. Picturelife also lets you edit your photos, something few "cloud storage" companies offer, and both apps work with existing iPhoto, Aperture, and Lightroom libraries on desktop.

There are a variety of ways to emulate Picturelife or Shutter’s functionality using today’s leading cloud storage services. Google+, Dropbox, Facebook, and others notably all have "auto-backup" features for mobile, but none are very good at browsing all of your photos. Apple’s Photo Stream has confusing limits and doesn’t feel native to the cloud. Dropbox, which acquired Loom and Snapjoy last year, has a nice mobile photo app called Carousel, but its web-based Photos page is still terribly basic. Everpix, another delightful photo service, collapsed under the pressure of competing with companies like Dropbox and Google on pricing. Google+ and Flickr remain great options, but bundle your photo management into a social networking experience. Facebook, meanwhile compresses your photos and offers no singular, navigable timeline view of all your photos.

Picturelife’s new slogan is "the smart home for your photos," not "a hard drive in the cloud"

As time goes on, Dropbox, Google, and others will evolve and become more than just cloud storage services. They’ll adapt better to the kinds of files people store. If they can improve their own photo and video capabilities faster than Picturelife can find a market, the company could quickly find itself in the same position Everpix did. It’s a tough ask for Picturelife, which relies on Amazon servers to store data, and can only make a few dollars per user on top of its monthly subscription service. StreamNation, on the other hand, owns its own servers and is more in control of its fate.

These companies don’t want to be part of the same conversation as Amazon or Google, though. Picturelife’s new slogan is "the smart home for your photos," not "a hard drive in the cloud." These companies understand photos and making mobile apps people actually want to use, and are hoping to use this skill to turn ordinary people into cloud storage customers for the first time. Not everyone is the scrapbooking type, after all, but nobody wants to lose all the photos they’ve taken on their phone — so these apps aren’t selling cloud storage. They’re selling great photo apps, with peace of mind served up on the side.