If you have an iPhone, you should download Overcast, the new podcast app from Instapaper creator and Tumblr co-founder Marco Arment. Podcast clients are a crowded category, of course, and it's harder than ever to stand out now that Apple offers its own free solution. But Overcast sets itself apart with thoughtful design, original features, and smart ideas — and it costs nothing to check out.

Most casual listeners could use Overcast for free without issue

In its first release, Overcast is a pretty simple app. It's iPhone-only at present; there's no iPad version, and Pocket Casts will remain a better option for syncing between Android and iOS (though overcast.fm is a solid web player). It's also missing some basic features like live streaming, so you'll have to download each episode first. But it feels mature in other regards, with a sensible, minimalist design that uses spare translucency, attractive typography, and flourishes of orange to give the app a sense of identity. I've used a lot of podcast clients that perhaps do more, but you'll never feel lost in Overcast.

Overcast is a free download with a single $4.99 in-app purchase to unlock full functionality: the ability to download over a cellular connection, a sleep timer, playlists longer than five episodes, and more. Most casual listeners could use it for free without much issue; there aren't any intrusive ads in the free version, and the premium features are mostly the sort of thing that would appeal to podcast junkies. But the most interesting paid-for features are to do with the listening experience itself. 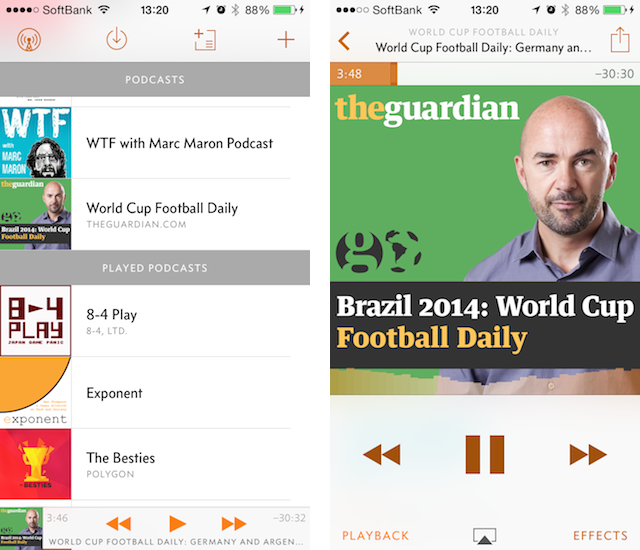 Overcast's excellent audio processing engine is its biggest selling point. The variable playback speed gives more natural results than any other client I've used before, and a feature called Smart Speed cuts out silences to save even more time. I still prefer to listen to podcasts at their natural speed, but for those who like to speed things up, Overcast might be a game changer. As is Voice Boost, which equalizes and compresses the file to make it easier to hear. The effect sounds great, and makes it much more viable to listen to podcasts wearing leaky Apple earphones on a busy street.

There's no reason not to try Overcast

Even if you're happy with your podcast client, there's no reason not to give Overcast a try — it imports your subscriptions over OPML, making for a smooth transition. If you're not happy with your current app of choice, the decision's even clearer; Arment has even included links to competing clients in the event that Overcast isn't for you. And if you don't listen to podcasts in the first place, well, Overcast's discovery features are as good a place as any to get started — the app pulls in recommendations from your Twitter feed, making it easy to find new shows.

Overcast isn't perfect, and won't be for everyone. But it's a good enough first start that I have no hesitation in recommending it. I even made the switch myself.