Nearly 100 fake Twitter accounts are being used to spread propaganda about the troubled Chinese regions of Tibet and Xinjiang, according to an investigation from Free Tibet, a London-based advocacy group. As the New York Times reports, many of the purportedly fake accounts are used to portray the regions in a rosy light, despite decades of unrest under communist rule, and some include attacks on the Dalai Lama, Tibet's exiled spiritual leader. Many of the accounts have since been suspended by Twitter, but Free Tibet warns that there may be hundreds more.

China has come under intense international criticism in recent years for its treatment of Tibetans and Uighurs, an ethnic minority concentrated in Xinjiang. Both groups have accused Beijing of suppressing religious and commercial freedoms, though China has gone to great lengths to discredit their grievances. 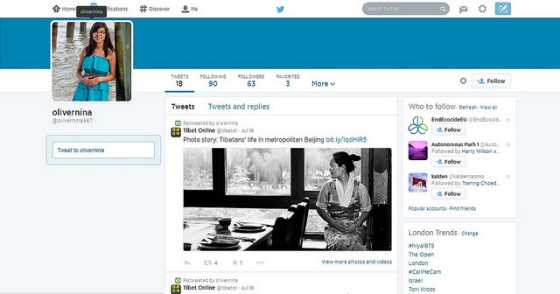 The accounts uncovered by Free Tibet are operated under Western names, and with profile photos taken from models and stock image services on the internet. Many include links to English-language articles and photos on Chinese websites that support the state's position, casting Tibetans as happy and appreciative of Chinese rule. Most of the accounts have small followings, though some number in the thousands. A tweet that linked to an article critical of the Dalai Lama was retweeted 6,500 times.

Although there is no clear evidence that they were created by the Chinese government, the Times reports that the scale of the operation points to state involvement. The government has also been known to meddle in online discourse by paying users to post pro-government opinions on message boards and social networks.

Free Tibet has called on Twitter to suspend and investigate the alleged abuses, which it outlined in a dossier released Monday. At the time of this writing, it appears that several of the accounts highlighted by Free Tibet and the Times have been suspended. In an email statement to The Verge, a Twitter spokesperson said that the company does not comment on individual accounts, citing privacy and security reasons.

"A company of Twitter’s size and high profile must take responsibility for failing to prevent abuse on this scale for the political purposes of an authoritarian regime," Eleanor Byrne-Rosengren, director of Free Tibet, wrote in a letter to Twitter CEO Dick Costolo on Monday. "These accounts are an act of cynical deception designed to manipulate public opinion regarding an occupied and brutally repressed country."

This article has been updated to include a statement from Twitter.