The next age of Foursquare begins today

The next age of Foursquare begins today

Foursquare needed a fresh start, so it created a brand new identity

In mid-May, Foursquare decided to split itself in two. The first half is Swarm, an app that lets you find friends nearby and check in. The second half is the forthcoming Foursquare 8.0, a complete redesign of the company’s existing app that has until now been kept secret. It's launching in just a few weeks. In the words of CEO Dennis Crowley, the new Foursquare is the app he always wanted to build — an exploration app unhindered by the check-ins that previously held center stage. Now we’re finally getting to see how it looks.

The new Foursquare swaps the service’s trademark green for pink ("watermelon"), and ditches its famous bouncing-ball logo for a vibrant "F" flag. Foursquare’s new wordmark is bold and grown-up instead of a playful doodle. The company looks nothing like before, and that’s the point. Battling the world’s preconceptions about the company is seemingly just as important as battling Yelp and Google.

"The check-in story has dominated the brand and user experience," says Crowley. "We’d hear people say ‘I had no idea I could use this app to search for places.’" So, the new Foursquare puts personalization front and center. Every piece of the new app that’s customized just for you, like your favorite foods served at nearby places, is accentuated in pink. Crowley calls Foursquare’s hyper-contextual recommendations "superpowers," a theme that has become increasingly prominent within the company in recent years. Crowley repeats again and again that Foursquare should help you see through walls and find the best places instantly in a city across the world.

"The check-in story has dominated the brand and user experience."

In early brainstorming sessions, the company tried globes, magnifying glasses, and other symbols of exploration to represent the company. More than twenty-five different Foursquare icons rotated across the home screens of the company’s many employees, a series of A/B tests to see what felt right. But eventually, the company rallied around Crowley’s "super" vision. The new Foursquare icon’s blocky pink "F" is Crowley’s superhero emblem as much as it is a flag, or a location pin. Instead of saving the world, however, Crowley’s app might help you find the best soba in SoHo. 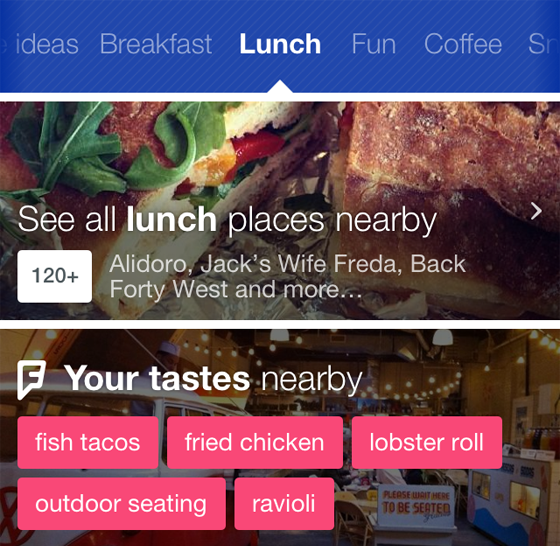 Foursquare hopes that its new design will make the service’s strengths more obvious, and provide more room for experimentation. "The existing version of Foursquare didn’t have enough room for us to flex all the things we wanted to do," says Crowley. "There’s been so much stuff locked up in admin tools and insider Foursquare views. Adding a 'most popular this month' section would’ve been awesome, but where are you gonna put it?" As part of today’s announcement, Foursquare is also teasing a few features of its new app, one of which is a Billboard-style "Most Popular" module that lets users see which places nearby are hottest right now. Thanks to its users who still check in, Foursquare is perhaps the only company that can track up and coming places with so much precision. But even without check-ins, Crowley argues, Foursquare’s unique "Pilgrim" location engine can pin you down at specific places better than any other app.

While many of Swarm’s user reviews have been disappointing — the app holds a 1.5 star rating in the App Store as of this writing — COO Jeff Glueck says that current users are checking in more than ever. "People are using Foursquare and Swarm better," he says. "They check in more often on Swarm according to our data, and are using Foursquare more often to explore. We’re seeing more Explore queries once people migrated." Glueck emphasizes that it’s a very vocal minority of Foursquare users who have opposed the company’s changes, which not only moved check-ins out of Foursquare but largely removed mayorships and the app’s points system for competing with friends for check-ins. Foursquare has since added back some of these features to Swarm. 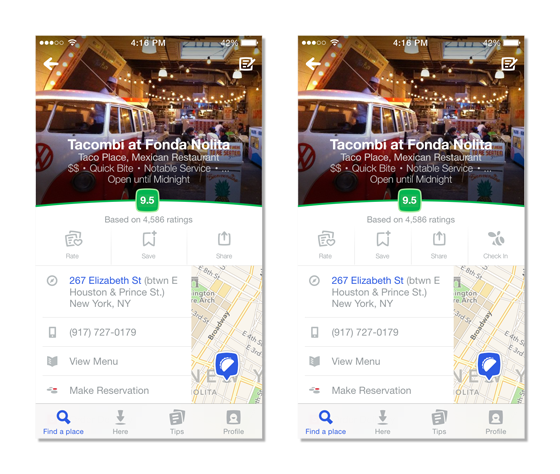 Foursquare admits that it could’ve managed expectations a bit better, and timed the two app launches closer together so users weren’t confused. "It wasn’t a mistake. There is no prior arc with someone trying to do an unbundling like this before," says Crowley, "but I don’t think there’s any real perfect way to do it." In the next few weeks, the company plans to finish pushing all of its users to Swarm before completely removing the check-in from Foursquare once and for all. Another big change it will have to communicate is that Foursquare and Swarm will soon contain two separate friends lists. Foursquare will let you follow people and tastemakers you like, while Swarm will let you pick who you want to share your general location with, which is likely a much smaller group. This distinction perfectly exemplifies why Foursquare struggled as an app containing two often-separate utilities.

One year ago, rumors swirled that morale at Foursquare had hit a new low. The company’s two focuses, check-ins and local recommendations, seemed interminably at odds. Only 5 percent of its users did both when they opened Foursquare each time. Today, Foursquare is getting the fresh start it always wanted — a chance to look different, and an opportunity to take on not one but two important new roles in peoples’ lives. Crowley and co. are betting that with their two new apps, people will finally understand exactly what Foursquare is for.