This sleek sleep tracker analyzes your bedroom, and your sleep patterns

Share All sharing options for: Sense is a glowing sphere that watches over you while you sleep

At age 19, Londoner James Proud decided to skip out on college and move to the States.

As one of several "Thiel Fellows," Proud received a $100,000 grant from esteemed venture capitalist Peter Thiel to skip college, move to San Francisco, and start working in tech. Thiel didn’t expect anything in return, and Proud didn’t deliver — until now. Proud, now 22, is today announcing Hello Inc and its first product Sense, a glowing polycarbonate orb that monitors sleep patterns and everything that happens in your bedroom in hopes of helping you catch a few more z’s. Sense is available for preorder today on Kickstarter for $99. If Sense reaches its funding goal of $100,000 it will ship in Q4 2014 for a retail price of $129.

Sense measures temperature, light, motion, humidity, sound, and even the particle counts for pollen and dust in the air. It also includes a tiny circular "Sleep Pill" that clips onto your pillowcase. Like most sleep trackers, the Pill records your sleep patterns by measuring how much you move in your sleep, but without asking you to wear a wristband or strap a sensor to your mattress. The two gadgets report back to your iOS or Android device through the Sense app over Bluetooth.

When you glance at the app in the morning, it displays a timeline of the prior evening. It might show you that at 3AM, you tossed and turned a bit because some lights came on, and at 6AM, your dog started howling, which caused some more stirring. Sense includes a microphone that listens to your room as you sleep, so it can actually play back the noises that woke you. Proud fed hundreds of sound samples into Sense — many of them snoring samples from YouTube — so the app might display "snoring" instead of "abrupt sound at 3AM."

It’s a useful feature, but a risky one to include — Google’s acquisition of Nest drew fervent skepticism about its potential for privacy intrusions, and Sense’s microphone will likely elicit a similar response. Fortunately, Sense only records sound spikes, not all sounds, and stores sounds on your phone and not in the cloud. Also, Sense’s mic only turns on once you’ve stopped moving and gone to bed. "It’s not always recording," says Proud. "There’s a rolling 5-second window where it listens for loud events like a truck or dog."

The goal of Sense, like most fitness trackers and quantified-self devices, is to provide transparency — or "sleep intelligence," as Hello Inc calls it. There are some cute features, like a built-in LED that makes Sense glow green if your room’s conducive to a good night’s sleep — and it only turns on once you’ve turned off the lights. A yellow or orange glow means you should check the app to see what’s wrong. If the air’s too smoggy, you might want to replace the filter in your central air unit. If the room’s too bright, you might want to invest in some blackout drapes. Common sense goes a long way towards better sleep, but Sense hopes to go further.

"With this, you can know every single night what’s going on," he says. Over time, the Sense app will offer advice like "You sleep best when the temperature is between 61 and 68 degrees, lower your thermostat?" or insights like "In the past month, you’ve gone to sleep an average of 38 minutes earlier than usual."

If you hear recurring sounds in your Sense log, you might even discover that you have a sleep disorder. "A large number of people are never diagnosed with this stuff." About 18 million Americans have moderate to severe sleep apnea, in fact, and 75 percent of them don’t know it, according to the The New York Times. Sense isn’t designed to diagnose any medical conditions, but could easily pick up the midnight coughing fits you didn’t know you had. 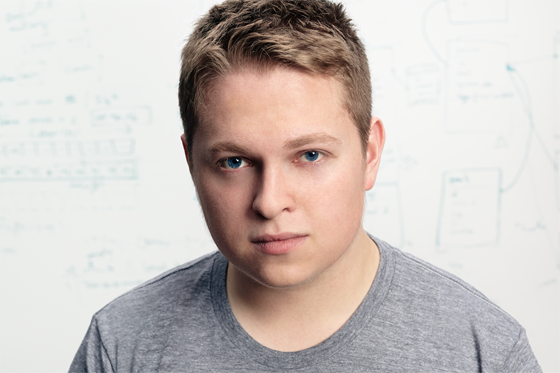 Sense might ask you to change a lot of things about your room or your habits, but there’s one problem Sense solves completely on its own. Like the Jawbone UP and other sleep trackers, Sense can wake you up once you’ve finished a REM cycle — instead of in the middle of one. In David Pierce’s tests of the Jawbone UP band, he felt "fantastic" every time it nudged him awake, even if it was 30 minutes earlier than his alarm would have.

Proud is convinced, however, that people don’t want to wear technology to bed. "What if you could take everything in a wearable and embed it in a pillow?" Proud asks. "You should ideally be able to get into bed, wake up, and not have to check buttons or charge up or sync anything." The Sleep Pill, as it's called, will need to be replaced yearly. A final price hasn’t yet been decided for replacement Pills.

"You should ideally be able to get into bed, wake up, and not have to check buttons or charge up."

Even if Sense works as stated, it’s going to be challenging to convince consumers to invite one more piece of technology into their bedroom. Proud seems to understand this. The promotional trailer for Sense is set to the same music as the movie trailer for Spike Jonze’s Her, a film about man’s intimate relationship with a new kind of technology. Assuming it works, Sense or something like it might come standard in the bedrooms of the future. After a while, Sense’s alarm clock function might be the only feature you really notice, but for $99, that alone could be worth it.

"The one thing wearables have made people realize is that this is an important area," says Proud. "Nobody’s even looking at the room that you spend a third of your life in!"