Microsoft's Lumia 530 takes on Android at the low end

Microsoft's Lumia 530 takes on Android at the low end

A successor to the most popular Windows Phone

Microsoft has a new smartphone competitor for the low end: the Lumia 530. Designed as a successor to the popular Lumia 520, Microsoft’s Lumia 530 includes similar specifications and a low price point of just 85 euros ($114) before taxes and subsidies. While the Lumia 525, a revision of the 520, included 1GB of RAM, Microsoft has opted for 512MB of RAM in the Lumia 530 and just 4GB of storage and a quad-core processor. The Lumia 530 also includes on-screen buttons, joining the Lumia 630 as the second Windows Phone to include this new functionality.

While the design of the Lumia 530 is different to the 520 thanks to its curved appearance, it still includes a similar 4-inch display and 5-megapixel rear camera with no flash. Beyond the specifications, this device could be significant for Windows Phone. The Lumia 520 is the most popular Windows Phone handset, and it has helped push marketshare for the third place OS. With Google focusing on developing markets and the low end with its Android One efforts, and devices like the Moto E and Moto G, Windows Phone faces increased competition in an area where it has seen its most success. 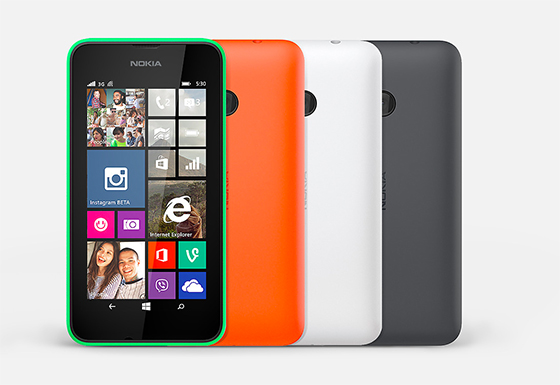 Regardless, Microsoft is pushing ahead with Windows Phone for the low end, and devices like the Lumia 530, to replace Nokia’s Asha and S40 handsets over the next 18 months. Microsoft recently revealed it has sold 5.8 million Lumia smartphones between April 25th and June 30th, and the Lumia 530 will play a significant role in any further growth of Windows Phone and Lumia sales overall.

Microsoft plans to release the Lumia 530 in single and dual-SIM variants in orange, green, white, and dark grey colors with changeable shells. Unlike the Lumia 525, Microsoft is planning to make the Lumia 530 available globally, which could mean we’ll start to see this new Windows Phone 8.1 device replace the Lumia 520 at US carriers. The Lumia 530 will be available in selected markets initially in August.