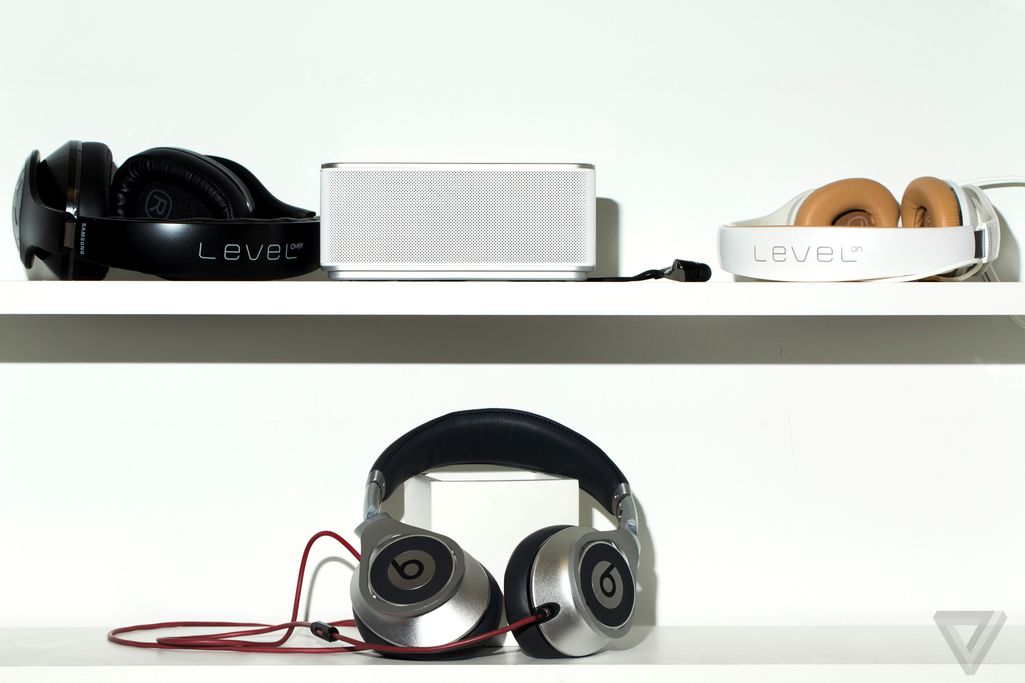 Watch your back, Jimmy Iovine. Samsung's coming for you.

Last week, Samsung launched a new lineup of products in the US called Level. Beginning with four products — over-ear, on-ear, and in-ear headphones, and a Bluetooth speaker — the Level lineup is about the least subtle Beats competitor ever created. Even the names are both cut from the same words-about-song-production cloth.

It's a move with obvious incentive: Beats is much-derided but massively popular, and is presumably about to become an integral part of Apple's music offerings. And while there are many Apple-specific headphone options, there’s no real default set for Android. Level devices come with a Samsung-made Android app, and their inline controls don’t work with Apple devices at all; these are Android headphones through and through.

If Samsung can pair better sound with the same stylishness — and the same marketing acumen, at which it's proven quite capable in the past — there's an enormous and proven Android-using market waiting for it.

All over the Verge offices the last few days, we've swapped our headphones — Beats, Sony, crappy Apple earbuds — for Level. (We're sure not switching to Milk Music, though.) Here’s how it went. 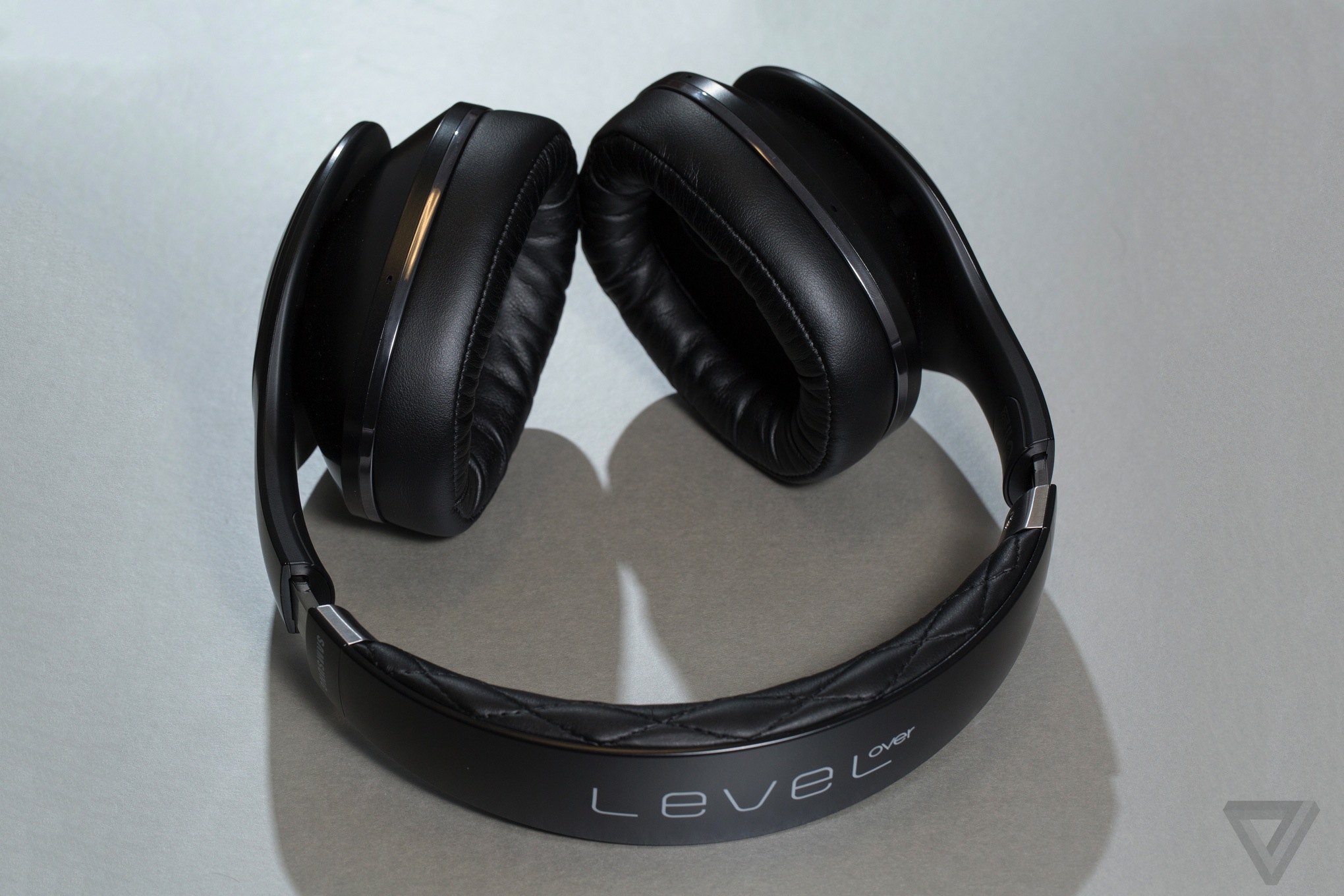 There doesn’t yet exist a giant, cosmic switch that instantly transports you to the center of an infinite void. That’s a shame, and it makes me wonder what the world’s scientists are spending their days doing. In the meantime, the $349.99 Level Over might be the next best option.

What? Sorry, I can't hear you

The Level Overs’ magic is in their aggressive active noise reduction (ANR), which uses external microphones to analyze ambient noise and "negates" it with a hiss that’s piped into the ear cups. My current daily-use set is Beats’ Studio Wireless, a $379.99 model that also features ANR and goes head-to-head with the Level Overs: both are over-the-ear designs with Bluetooth support, optional wired use, phone controls, and price tags that are well beyond impulse-purchase range. It’s just that the Samsung’s ANR is way better — the artificial hiss is far less noticeable, and it’s so powerful that the effect can be a little unnerving the first time you turn it on. The outside world just immediately disappears, replaced with nothingness. (And unlike the Studio Wireless, the Level Over’s ANR can be turned off if you so choose.)

I don’t personally mind the notoriously bass-heavy sound that comes out of Beats sets, but there’s also no question that the Level Over produces a cleaner, truer sound — a sound that’s adjustable with Samsung’s Level app.

I’m not advocating spending over $300 on a set of headphones — most of us can be just as happy, if not happier, with headphones that cost half as much. Considering how many Beats I see on the street every day, though, there’s clearly a market here, and Samsung’s entry needs a serious look. 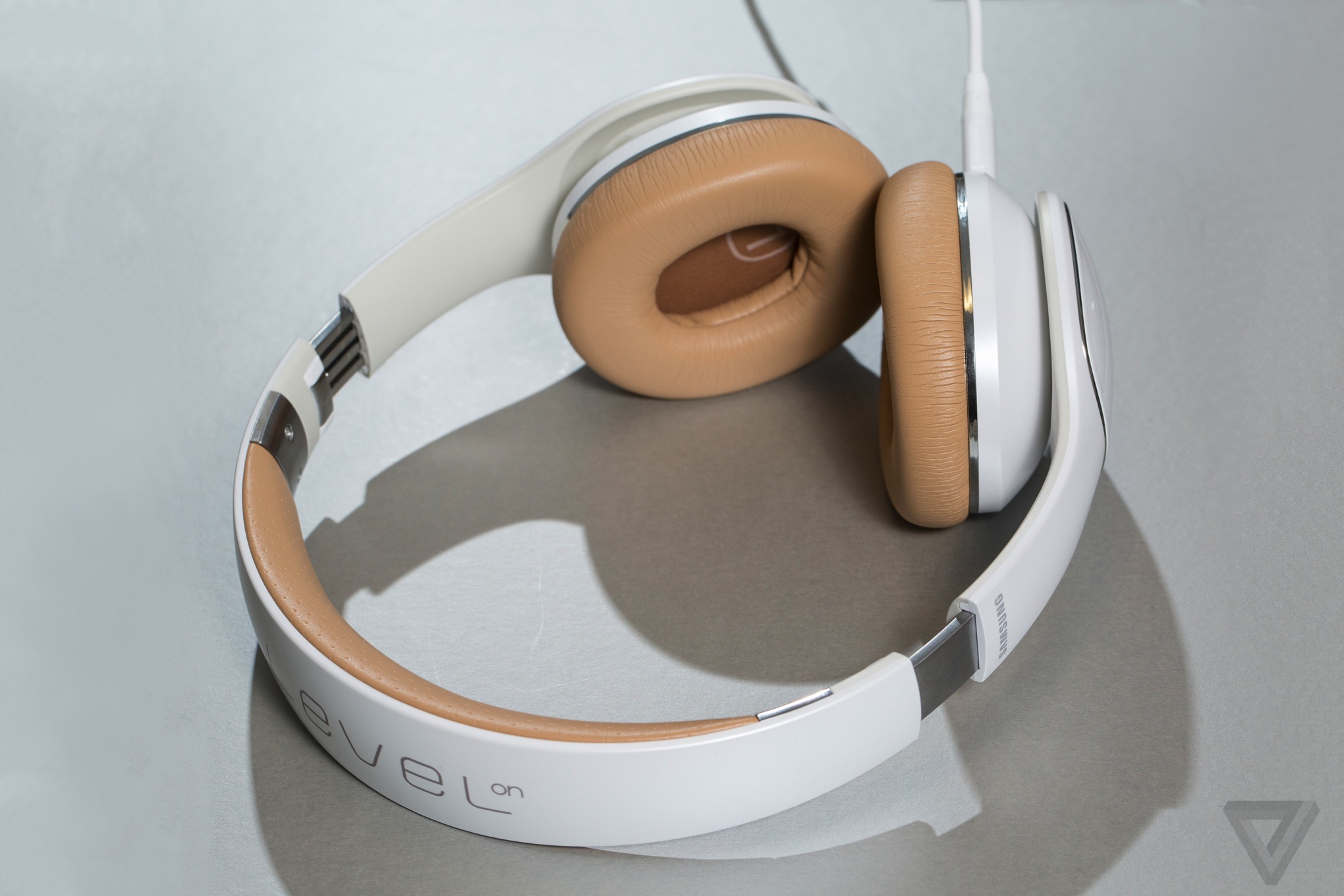 The $179.99 on-ear Level On headphones are most like the Beats you know: they’re dead ringers for Beats Solo 2 headphones, its most popular line. Everything from the hinges to the headband to the earcups recall the Beats look. The major difference between Samsung’s offering and the ubiquitous Beats is the number of colors you can buy them in — while Solo 2s are available in every shade of the rainbow, the Level Ins stick to traditional black or white colorways.

That’s not to say the Ons aren’t attractive. In fact, they look more upscale than the Beats. I’m partial to the black version, but the white isn’t bad either. It just looks like Samsung tried to pull off a high-end luxury look with the contrasting tan leather, and it doesn’t quite work for me.

Not quite the high-end luxury Samsung's going for

Fortunately, the Level Ons are more comfortable and more pleasing to my ears than Beats’ Solo 2. On-ear headphones can often be uncomfortable, crushing your ears or putting too much pressure on your head. The Solo 2s definitely have this problem, but the Level Ons are lightweight and don’t squeeze my cranium in unpleasant ways. The sound won’t win over audiophiles, but they are more balanced than any Beats headphone I’ve listened to and aren’t nearly as bass-heavy (in fact, they don’t have much bass response at all). That might not please those looking for the thumpy Beats sound, but the Level Ons are more versatile for different types of music.

For $180, you could do a lot better with other brands of headphones, but I wouldn’t fault anyone that chooses the Level On over its Beats counterpart. 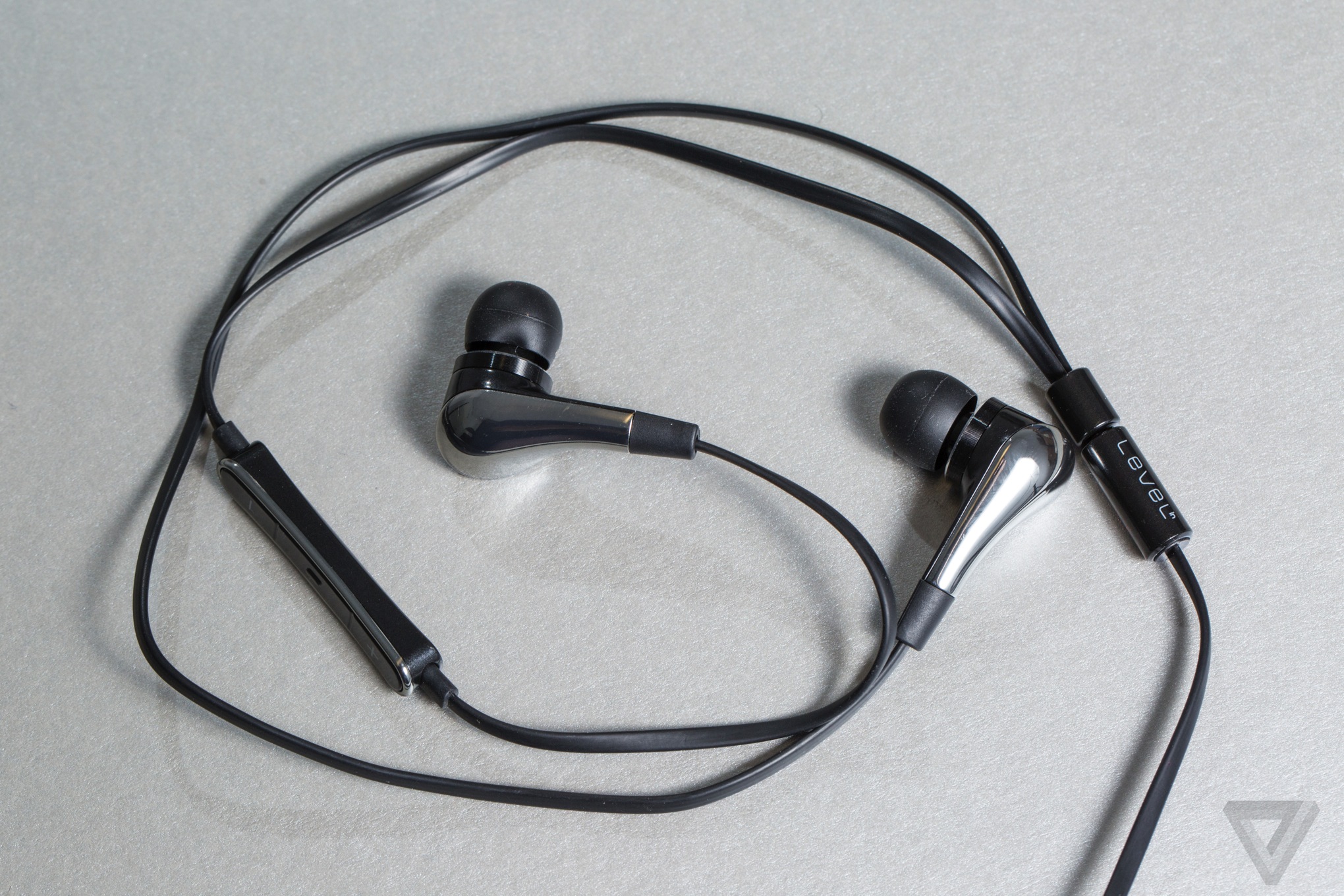 Everything I needed to know about the $149.99 Level In in-ear headphones I learned at the moment Jay-Z leans into the mic on "Otis" and says "I guess I got my swagger back!" Jay sounded more or less like he'd found his swagger at the bottom of a well.

The Level Ins are made to compete with the Beats Tour, the most powerful of Beats' many bassy earphone options. The earbuds come in the same handsome black and white as the other Level headphones, with good-looking metallic earpieces and integrated microphone and playback controls, but their sound doesn't measure up to the rest of the lineup. Samsung boasts of deep bass and midrange, but all I hear in these headphones is treble. Tinny, thin treble. They're better than the earbuds that came with your phone, certainly, but not by much. I've heard great-sounding $150 earbuds, and these don't come close. Even Beats offers a fuller sound, with more clarity and resonance.

The Level Ins are also heavy, and a little awkward — I'm not the only one who had trouble fitting them in my ears. They do come with a bunch of tip sizes (and a nice carrying case), though, so your comfort mileage may vary. But your Watch The Throne mileage won't. 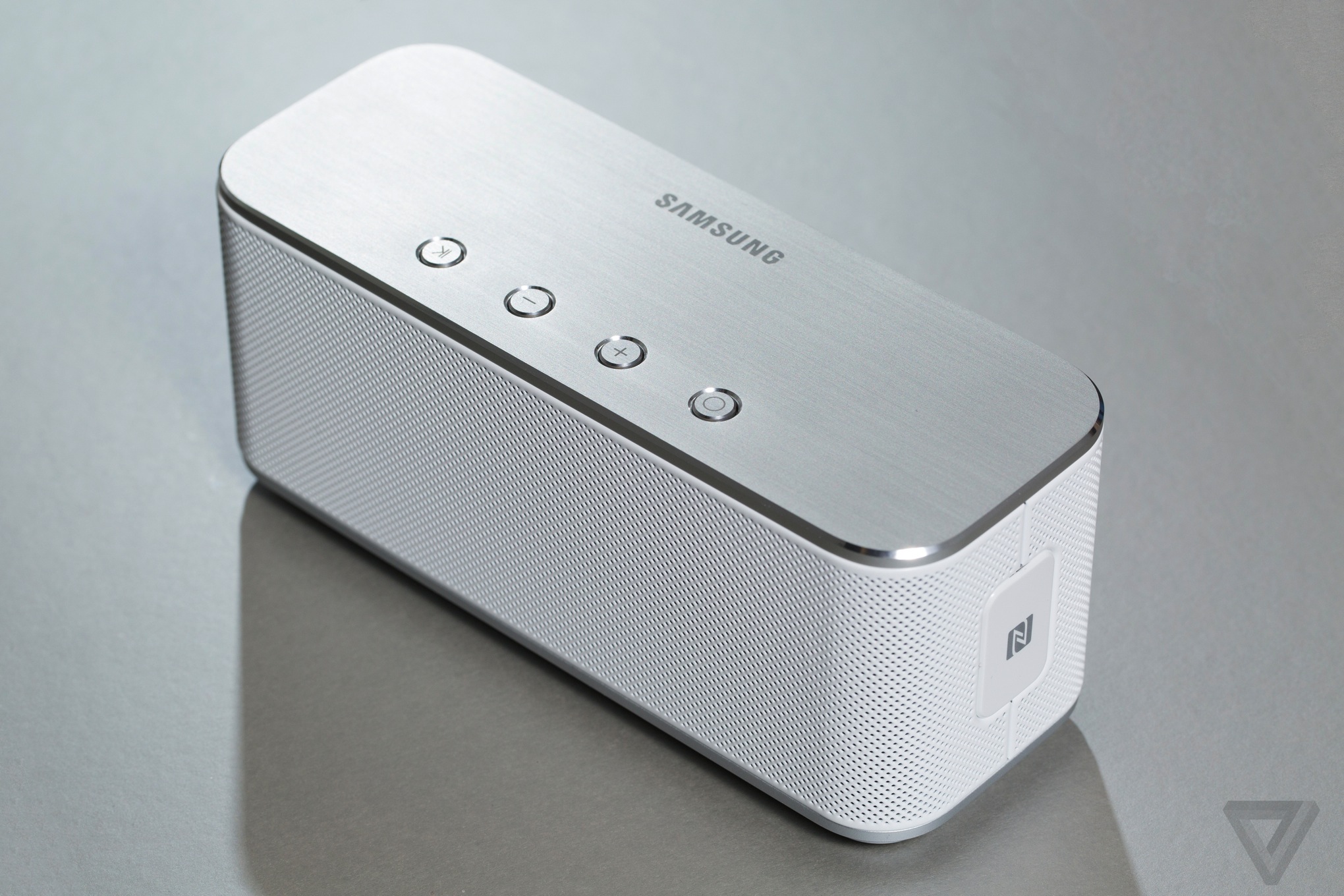 The $169.99 Level Box is the offering from the Level series that strays the farthest from Beats’ offerings, and it might also hold the clearest advantage. That’s not just because of the massive shortcomings of the Beats Pill 2.0, either. Whether you’re blasting punk rock or listening to an orchestra swell, the Level Box gets loud while maintaining clarity, and reproduces decent low-end sound from its small body.

The branded, brushed-metal surface tops a rounded rectangular brick of plastic that doesn’t feel too flimsy, which means the Level Box is heavy enough to stay put on a table, but not too hefty to throw in a bag. Samsung’s hardware design is typically a polarizing topic, but it hit a home run with the Level Box.

Samsung hit a home run with the Level Box design

The sound can be a bit hollow, especially in the midrange; it really only projects well in one direction. And, in the end, it could always stand to be a bit louder. Oddly enough, the S Voice speakerphone function spreads the sound out much more omnidirectionally, and while it’s a bit muffled it definitely sounds good enough that it made me wonder if Samsung could have done more with this small package. Additionally, the Bluetooth connection cut out ever-so-briefly a few times, but the range was good and even worked through one of the walls in our office. The Level Box easily joins the front of the pack when it comes to Bluetooth speakers, leaving the Beats Pill 2.0 well in the dust.