Instagram may have leaked an image of its Snapchat competitor, Bolt

Instagram may have leaked an image of its Snapchat competitor, Bolt

Instagram seems to have accidentally posted a link to its new "one tap photo messaging app" Bolt inside Instagram for Android. Tapping the "free" button yields a dead end in the Google Play Store. Only a few users seem to be seeing the link, and some of whom have posted screenshots on Twitter. Instagram hasn't responded to a request for comment.

Did anyone else get this weird bolt notification on their Instagram earlier? pic.twitter.com/SBrLH7qTTK

Richard Groves, one of the few privy to the new banner ad, tells The Verge that he was using the official Instagram app on his Nexus 5 around 11PM ET last night when he first saw Bolt, and then it went away 15 minutes later. Another source using a Moto X confirmed that the Bolt banner showed up last night. Grove offered this full screenshot: 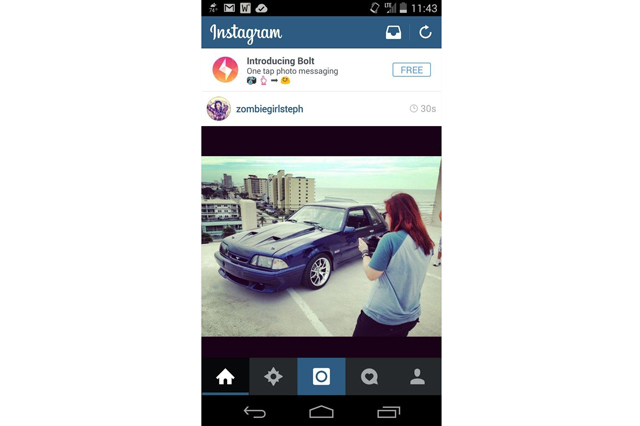 Facebook frequently tests hidden features inside its Android and iOS app only to "activate" them later — this is how it rolls out new features over long periods of time — but sometimes the company has shown to be careless in doing so. Before launching its new ephemeral messaging app Slingshot, Facebook accidentally leaked the app on the App Store. Before Slingshot's launch, rumors swirled that Facebook was working on a new app to emulate Taptalk, a new "one tap" photo messaging app. Slingshot ended up looking more like Snapchat, however. Perhaps Bolt is the app we were looking for?

Another angle on Bolt comes from TechCrunch's Sarah Perez, who speculates that Bolt might be a fictional app being used to test "app install ads" inside Instagram. Facebook has only recently rolled out app install ads itself, so it would be a shock to see them so soon inside an ad platform as nascent as Instagram, but that doesn't mean the company isn't testing them.

A final note — assuming Bolt is indeed Facebook's new app, the company might have some more drama on its hands. After sparring with FiftyThree over the name Paper, which Facebook chose for its new news app, it might also have to deal with the trademark of Bolt, a free calling app for Android.