Playing 'Gods Will Be Watching' turned me into a terrible person

A game only Walter White could love

Share All sharing options for: Playing 'Gods Will Be Watching' turned me into a terrible person

Russian roulette is terrifying, even when the gun is made of pixels.

You might think of a video game as something that's fun, because the medium is stocked full of powerful wish fulfillment fantasies that let you run rampant in a bustling city or hop into a giant robot suit and wage war. Gods Will Be Watching, on the other hand, is far from fun. It's brutally challenging, often tediously repetitive, and forces you to make decisions that will make you feel like a complete asshole — you'll find yourself doing everything from terrorizing hostages to injecting people with untested, dangerous serums. It'll make you wince, but unlike most other games, it'll actually make you feel something.

Gods Will Be Watching tells the story of a sci-fi, dystopic future where two factions are at war over a powerful biological weapon that could be used to terrorize entire planets. The story is actually surprisingly unimportant, however — the gritty futuristic setting is just an excuse to put you in all manner of horrible situations. The very first scene has you managing a group of hostages. You need to hack into a secure system to steal some important intel, and the hostages are there to ensure the soldiers outside the door don't just blow you away.

It's essentially a plate-spinning act: you need to hack the system as quickly as possible while keeping the system secure, and also watching the encroaching soldiers who will attack if you let them get too close. At the same time, you need to keep the hostages sufficiently scared so that they won't get brave and try to attack you, but not so scared that they up and run for their lives.

I died plenty of times before I figured it out

It's a lot to keep track of, and even on the easiest setting I died plenty of times before I figured out just the right way to approach the situation. Even still I was forced to kill two hostages; there aren't any happy endings in Gods Will Be Watching. The game is difficult largely because you're often balancing so many things at once, and because it only takes one or two bad decisions to completely screw things up. When you're being tortured, you can only have so many teeth brutally pulled out of your face before succumbing to the injuries. So you have to decide when to lie and when to tell the truth, and often it takes failing the challenge a few times to understand which decisions are the right ones.

This can be frustrating, especially because the actual gameplay isn't all that exciting. Mostly you'll just be clicking through menus and choosing actions, while keeping an eye on progress bars and the body language of other characters. But when things work, Gods Will Be Watching can be shockingly powerful. Watching someone get torn in half because of a choice you made feels terrible, and I found myself actually holding my breath during the Russian roulette sequence, when the trigger was pulled every time I have an unsatisfactory answer. 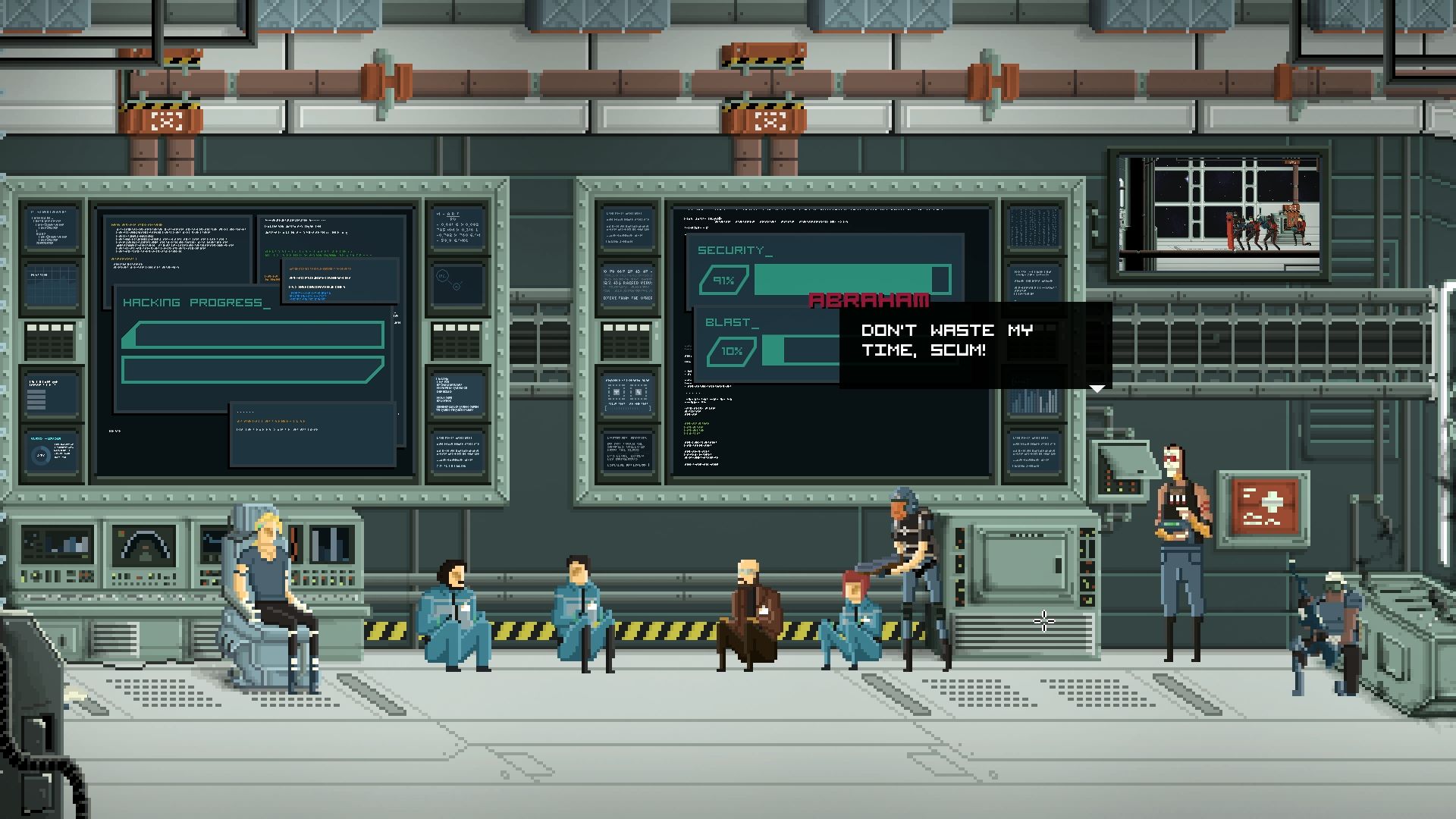 Much of this is due to the sheer shock of it all — it may be rendered in pixel art, but Gods Will Be Watching is still an incredibly graphic game. For me, much of the game's power came from the fact that I was making the decisions; people didn't just die in the game, they died because of me. During one sequence I had to choose who to inject with an untested and potentially deadly formula, and I ended up using it on a dog so that I could spare my crew. Gods Will Be Watching made me kill a defenseless animal.

Gods Will Be Watching started as a browser experience built for the Ludum Dare game making competition, and after receiving quite a bit of praise the developers at Deconstructeam took to Kickstarter to fund a bigger and better version. Eventually it was picked up by publisher Devolver Digital to add to its growing stable of punk rock games. At the time, developer Jordi de Paco told The Verge that he wanted the new version to maintain the spirit of the original — which had you keep a small band of survivors alive while stranded on an alien planet — while fleshing it out with new ideas. "All the puzzles almost sprouted out naturally," he explained.

And for the most part, the studio was successful. It's definitely a rough experience with a bit too much reliance on luck and some poorly thought-out design choices, including characters that die in one chapter only to reappear in the next. But taken on their own, each sequence is a gripping, challenging, and ultimately heartbreaking experience. You won't have fun playing any of them, but you'll definitely remember the sound of an empty revolver firing.

Gods Will Be Watching is available now for Windows, Mac, and Linux.