Two huge Game of Thrones fans recently earned spots in a future novel from George R.R. Martin by donating $20,000 to causes close to the author's heart. Sadly, 13-year-old "Jack B." wasn't one of those winners. But when Jack's father showed him a news article about the charity campaign, the young teen felt inspired to donate his "pocket money" in hopes that Martin might consider adding just one more person to the next A Song of Ice and Fire book.

The only problem is that teenagers usually aren't carrying around a ton of pocket money. Jack's contribution amounted to just £153 (approximately $259.90 USD), but he made sure to include a handwritten note pleading his case. "Wolves are my most favorite animal," the boy wrote to Martin. "Although I'm not allowed to watch certain bits of Game of Thrones, I do enjoy playing Skyrim and acting out being a warrior with my bokken." 13-year-old Jack wrapped up the letter saying he'd "love" to appear in Martin's future work. "A gruesome, grizzly death is all I ask for." 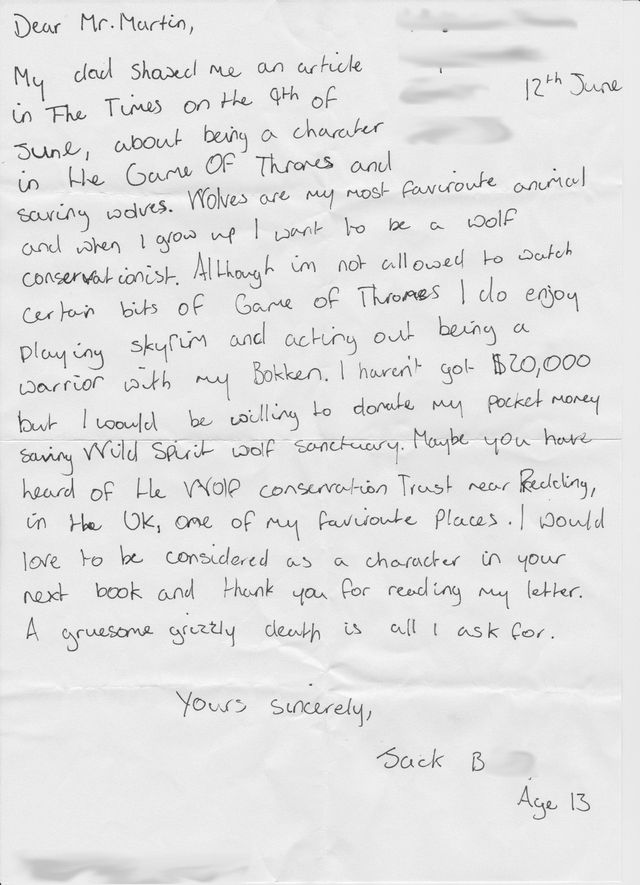 Unfortunately it appears Jack won't get his wish, though Martin appreciated the gesture. "I cannot tell you how much that moved me," he wrote in a response to the boy. But the campaign's big spenders — one of whom is a Facebook employee — will be the only people going into The Wind of Winter. "Those spots have already been filled by some very generous donors, and there’s a limit to how many people even I can kill." If Jack's parents had forked out $20,000, it's likely Martin would have had no problem beheading the 13-year-old in fiction, or finding some other grisly end for his character. Still, as a show of thanks for the small but meaningful donation, Martin and Prizeo made their own contribution of $10,000 to a wolf conservation trust that Jack mentioned in his original letter.