Camping in hell: the endless lines of Comic-Con 2014

Share All sharing options for: Camping in hell: the endless lines of Comic-Con 2014

It was 3:55AM when we reached the end of the line. We’d already walked a full 1.09 miles, past people fast asleep in sleeping bags and lawn chairs, camped out from midday the day before. Doors wouldn’t open for another six hours. As we walked down this snaking mass of people behind the convention center, looking for the end, staffers in yellow polos gave us bemused looks. A few gave sympathetic nods. They were dealing with what might be longest line Comic-Con had ever seen. All for Hall H, where fans hope to catch glimpses of upcoming blockbusters like Batman v. Superman: Dawn of Justice and Interstellar.

Even for an event famous for large crowds and long waits, this year’s endless line may represent a tipping point. 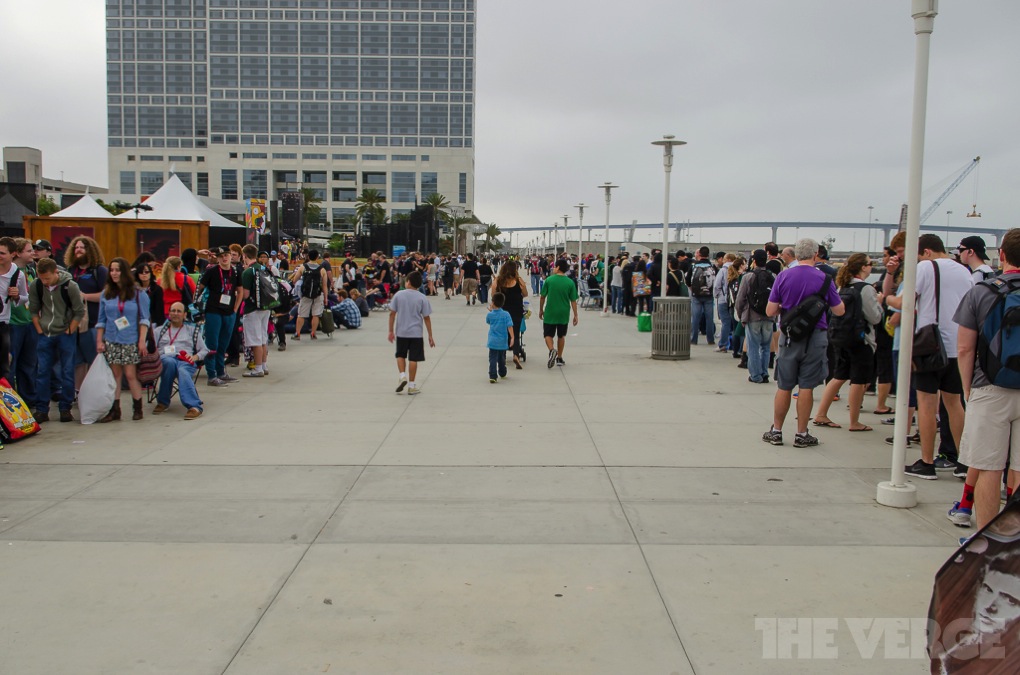 "Never underestimate the power of psycho fans," said Jorie, a Chicago native in line. Wearing a Winter Soldier hoodie to keep warm, she’s a convention veteran, having attended — and worked at — various comic and anime conventions in Chicago for more than a decade. This is her first time in San Diego, so she should be excited. "And here we are," she said. "A mile away from H Hall. Hoping to God we can squeeze our way in."

Welcome to a new era in fandom, where once-niche properties like Thor and Guardians of the Galaxy have become so mainstream that a small town’s worth of people will line up a day early for the chance to see stars from them. It’s also a new era for SDCC itself, as the meaning of fan conventions changes and it struggles to manage ballooning turnout. An estimated 130,000 fans will attend this weekend. For some perspective, Hall H, Comic-Con’s largest auditorium, seats approximately 6,500 people. Whispers among the fans put the population on the line between 8,000 and 12,000. Even if those estimates are off, there’s simply not enough room for everyone to get in.

"Hoping to God we can squeeze our way in."

"It’s never been this bad, bro," said Khatari, another fan in our little camp. He’s been coming to SDCC for three years. 3AM wasn’t such a big deal in previous years — waiting long hours and camping out are expected, but this year the stakes are much higher. "I think it’s because of [Batman v. Superman]. I think now everybody wants to come. People are like, ‘If I miss out on Hall H this year, I’m gonna miss out on Comic-Con.’" Khatari eventually left.

That this line, generally seen as a rite of passage for the truly dedicated fan, was unlike anything anyone had ever seen was a common assessment. Some took to Twitter to complain:

@kwameopam I have been going for 11 years. I have never expected this.

The explosion in the fandom industry in recent years is certainly contributing to this problem. Studios are vying hard to get major properties that geeks will love, and Hollywood has every incentive to up the hype ante to get fans to come out. SDCC is the epicenter of geek culture, and increasingly pop culture in general. Marvel alone is announcing six new movies through 2019, to say nothing of their efforts on television and even Netflix. That Comic-Con has effectively turned downtown San Diego into Disneyland speaks to an outsized return on investment. But where fans are concerned, packing everything from Marvel alongside Warner Bros. and Legendary Pictures in the same room on the same day is simply unsustainable.

What’s more, the ability of the Con’s organizers to contain all these people is visibly straining. This year, it implemented a new wristband system to more accurately assess how many people would queue up. However, according to the Los Angeles Daily News, Con-goers have complained about lax security and higher competition for hotly contested spots.

@HallHLine - the concept of the wristband is awesome. Everyone is in the same boat. That being said-the execution blows. Boat is sinking

This predicament signals that Comic-Con is at a crossroads as a fan convention, even as it sees success as an industry one. Still, fans seem optimistic, or at least dedicated to sticking around. Many were commiserating over the shared experience, others were singing, and even though many already know they had no real hope of getting inside Hall H, they’re staying. Comic-Con is still Disneyland for them. But when the industry is inside and you’re stuck outside, Disneyland starts to feel more like being stuck.

"Refugee camps at least involve people going from a bad situation to one that’s hopefully better," said Jorie. "We did this to ourselves."