Richard Dreyfuss has never heard of it: talking to the creator of 'Sharknado 2'

Richard Dreyfuss has never heard of it: talking to the creator of 'Sharknado 2'

"Why are people laughing at our very important documentary?"

Thunder Levin is in on the joke. The improbably named writer of SyFy’s notorious Sharknado has been making tongue-in-cheek disasters since 2008’s Mutant Zombie Vampires From The Hood. But it wasn’t until last year’s Jaws-meets-Twister disaster film that Levin hit pay dirt, attracting millions of viewers to a story that he has never described as anything but ridiculous. This year he hopes to do it again — the fan-named Sharknado 2: The Second One debuts Wednesday night on SyFy.

There’s a plot, probably, but we had other questions for the screenwriter. Levin, who is very good company, sat down with us at Comic-Con this week to talk about Sharknado’s hidden activism, its frozen cast, and whether he would ever write a script for Arachnoquake. He also tells a story about Richard Dreyfuss that we will be sharing with our friends for quite some time.

Interview has been edited and condensed. 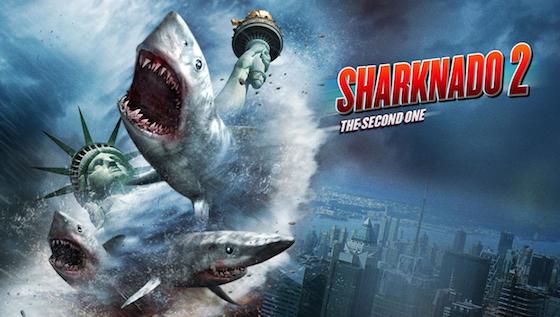 So who came up with Sharknado, anyway?

Thunder Levin: The guy who thought of Sharknado was (director) Anthony Ferrante and one of his writing partners on another film. They were writing Leprechaun’s Revenge and they just threw in this line about some other town — just a reference, it wasn’t even in the movie — It was like ‘Yeah, we don’t want to be like that town. They never recovered after the sharknado.’ And that’s just all there was to it. Then the guys at SyFy said, "Sharknado! We should make that as a movie!’ And they and the Asylum got together, and I’d made another film for the Asylum, and they liked that. So they said, we want you to write Sharknado. I thought it was the most ridiculous thing I’d ever heard.

It seems like you were able to give us the over-the-top movie people wanted after they heard the title.

It was a matter of walking the line. We couldn’t do it straight. But on the other hand you don’t want to stray into farce or out-and-out comedy. If the actors start winking at the camera or cracking jokes, it stops working. So as a matter of having the characters be immersed in the moment while still letting the audience know you’re in on the joke.

"You don't want to stray into farce."

Sharknado really seemed to hit a nerve on Twitter, where I live.

So you’re a digital avatar?

I’m one of those people.

So if I hold a magnet to you, the image scatters?

Yes. I’m an algorithm. So one of the interesting things about Sharknado is that every time it aired for the first few times, more people watched it. I assumed it was people just enjoyed saying "Sharknado." Do you have any other theories?

The movie is just fun. You don’t have to think about it. Last summer there were a lot of big blockbusters that were very dark. They all made tons of money, but nothing exploded, nothing captured the public imagination. Then we came along with our silly little movie that was just loads of fun, and we didn’t take it too seriously, and no one else had to take it too seriously to enjoy it. The fact that you weren’t taking it too seriously let you in on the joke.

Did you take any steps this time to be more consistent about when it was or was not raining?

Well that wasn’t a story thing, that was just the budget! Anthony was shooting for 18 days in LA, and they happened to be 18 sunny days, and he only had so many garden hoses he could be spraying people with water. I suppose from a filmmaking standpoint that’s a legitimate gripe, but it’s just an artifact of the fact we’re doing a $100 million film for less than most films’ catering budget for one day.

"We're doing a $100 million film for less than most films' catering budget for one day."

One of the reasons the second movie looks a lot bigger and a lot more expensive is simply we were shooting in February and March of the worst winter the East Coast has had in recent memory. So the weather actually helped us! Because it looked crappy. It looked like there was a tornado rolling into town. I mean, it was hell for us — we were shooting a movie that takes place in July, and it was 5 degrees out! The day we were shooting in Citi Field, I’ve never been that cold in my life, and I’ve been to Minneapolis in February. The cast’s jaws wouldn’t work right, it was so cold. They couldn’t speak properly — they sounded like folks who have gone deaf. So they had to bring in little portable heaters that would blow warm air on their faces from just off camera, just so they could get the dialogue out.

There’s something poetic about actors in a shark film finding that their jaws don’t work.

I met Richard Dreyfuss this morning — he’s never heard of it. I walked up and said "Hi, I wrote Sharknado!" He said, "What’s Sharknado!" I said, it’s a silly movie about sharks falling from the sky.

You should have said, "It’s a vast improvement on the idea of Jaws."

I said we paid homage to Jaws. Then we started talking about history — apparently he was going to be going on Fox News explaining American history to right-wingers who don’t quite get it.

I didn’t know he was such a big history buff. And I’ve actually written a movie trilogy that’s sort of about the American revolution, and I wanted to talk to him about it. But he had to go on TV.

Maybe you could get Richard for Sharknado 3.

Well we talked about it for this one, and it would have been brilliant except that he’d done the same thing basically in Piranha. So we felt like it would just be repeating what somebody else was making fun of.

Anthony said after the first Sharknado that to do a sequel, you’d really have to "up the ante." In the first one you’ve got people throwing bombs at sharks, taking a chainsaw through a shark. How do you up the ante in Sharknado 2?

Well, SyFy wanted it to take place in New York City, which I loved, because I’m from New York. New York City boy, born and bred. So that in and of itself raised the stakes a lot. Having a disaster film set in New York, there are all these iconic landmarks, it’s the capital of the world — you probably shouldn’t write that, but that’s certainly the way New Yorkers think of it. So that did a lot for us right there. And then it was just a matter of trying to be bigger and better.

"We just went with the assumption that people who would be watching this knew what a sharknado was."

I think just inevitably having sharknados rampaging through New York City is going to make it a bigger thing. And the fact that we didn’t need to explain it this time. We just went with the assumption that people who would be watching this knew what a sharknado was. So a lot of the build-up, a lot of the exposition, we didn’t need to bother with it. We just got right into it. Almost from the first minute of the film, shit’s happening. And it just never lets up.

Wasn’t the charm of Sharknado that you didn’t have to explain it? That the whole movie was in the title?

Well that’s true, but I felt it was incumbent upon me to to provide some sort of rationale for how this would happen. I said oh there was a hurricane and it was pushing all the sharks north, and tornadoes forming over the ocean. We don’t even go that far in the second one. Why are there sharks in New York harbor? We never answer that question. There they are!

Well with climate change, you can put a shark anywhere these days and people accept it.

"Why are people laughing at our very important documentary?"

See, this is what I don’t understand. Why are people laughing at our very important documentary about global warming?

I think it would be an incredible achievement if Sharknado 2 was the film that finally got people serious about the global warming crisis. You never know when the tipping point is going to come.

Anything else you want to say about Sharknado 2?

Actually, I do have one other question. There have been calls for similar animal disaster movies — Sharkalanche, Tsharknami, Arachnoquake — do any of those have any appeal to you as a screenwriter?

We’re done. We did Sharknado. What more is there?