Microsoft is planning to release its first update to Windows Phone 8.1 soon, and the company has started detailing some of the upcoming features to phone manufacturers. One of the main visual changes with Update 1 is the introduction of folder support, allowing Windows Phone users to drag one Tile on top of another and create a folder to organize apps. It’s a feature both Android and iOS have had for years, so it’s encouraging to see Microsoft is finally closing this gap.

One of the more interesting features with Update 1 is support for interactive case accessories. HTC, Samsung, and LG all use cases that wake phones up when they’re opened, or even display information on a phone display when a case is in use. Microsoft is planning to allow phone makers to do the same for their Windows Phones, which should significantly improve case support. The Verge understands that HTC is currently testing a version of its One Android handset designed for Windows Phone, so this case support could pave the way for HTC’s Dot View case with its upcoming Windows Phone. 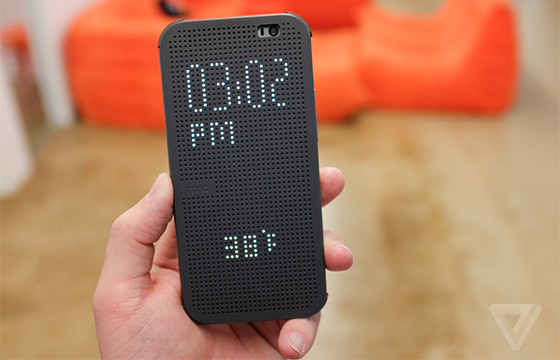 Other improvements include a phonebook entry for Cortana to allow car owners to trigger speech within their vehicles, support for the 1280 x 800 screen resolution and 7-inch devices, a medium Live Tile for the Store app, and Voice over LTE (VoLTE) support. Microsoft has finalized Windows Phone 8.1 Update 1 internally, but the company has not yet announced its existence. Sources familiar with Microsoft’s plans tell The Verge that Microsoft plans to release Windows Phone 8.1 Update 1 to developers possibly as soon as next week, or within August.