'Gotham' first look: all set-up and no substance

Share All sharing options for: 'Gotham' first look: all set-up and no substance

Gotham premieres tonight at 8pm ET on Fox. Here's our look at the first episode when it first screened at San Diego Comic-Con this summer.

In the opening moments of Fox’s new series Gotham, you follow a young, strangely mute Selina Kyle as she leaps up and down fire escapes, picking pockets and making mischief. You guess she’s supposed to be "young Catwoman" because of her signature goggles and her cat-like agility, but you never get a glimpse into her inner life.

A few minutes later she comes across a particularly iconic murder scene. The Wayne family is on their way home after a night out, and have taken Selina’s alley as a shortcut to a cab. A masked gunman appears. A gun fires. Pearls fall to the pavement. And Bruce Wayne is left with the cold bodies of his parents as the murderer vanishes into the night. The drama is palpable in this scene — the score swells, the camera pulls way back to expose the human wreckage — but, after Wayne the younger lets out a just-shy-of-bloodcurdling scream, you get the sense that you’ve seen all of this before.

That’s the problem with Gotham right from the beginning. As concerned as it is to show you characters and set pieces you might recognize, it never really takes the time to enrich them. It’s hard to really judge a pilot since so much is just set-up, but for Gotham to work, it needs to give you a reason to care about these characters — many of them future heroes and villains we already know — beyond what’s familiar on the surface.

Gotham takes place in Gotham City, a place we’ve been trained to believe is as dirty and dangerous as crack-era New York — and this is all before Batman comes to save the city from itself. Most of the action follows Jim Gordon, played by Ben McKenzie, here a young detective trying to clean up Gotham’s streets amidst corruption and crime. His partner, Harvey Bullock — played by Sons of Anarchy’s Donal Logue — is the boozing bad cop to his good cop and has no problem making deals with the criminal element to make a case. The pair are thrown headlong into solving the Wayne murders, and their investigation takes them on a tour of Gotham players, either mainstays from the comics or riffs on noir archetypes, twisted just enough to hint at something fresh but never enough to draw us in.

Take Fish Mooney, for instance. Played by Jada Pinkett Smith, Mooney’s a take on that classic, grasping crime boss-slash-nightclub owner who has her hand in both legal and illegal activities. You can tell Smith’s having a great deal of fun in the role, blending street smarts with urbane class and chewing scenery while she does it, but she’s so completely campy that you never feel the air of sinister power she’s meant to exude. Her lackey is Oswald Cobblepot, played by Robin Lord Taylor, who’s a serviceable proto-Penguin but never hits the high notes you want him to. In Gotham, you’re always left wanting more.

The rest of the recognizable characters — Renee Montoya, Alfred, Carmine Falcone, and others — are all a series of near misses, but none are more disappointing than Jim Gordon himself. Ben McKenzie’s take is just so flat that, by episode’s end, the only thing notable about him is the fact that we know he’ll be Commissioner one day. He is, however, elevated by a star turn by Donal Logue. Funny, conflicted, and a little dangerous, Harvey Bullock is the kind of dirty cop you want to learn about and root for. As yet another character lifted from the comics, he’s a bit more than what we’ve been trained to expect, even playing something of a mentor to the young Gordon. Frankly, DC Entertainment should just hand the show to him. 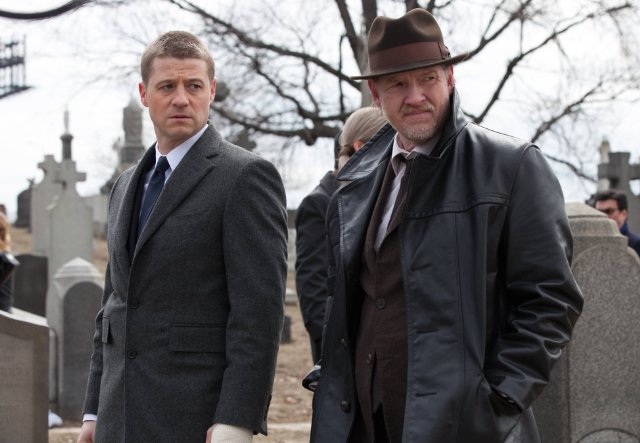 The biggest disappointment, though, is how the city itself is characterized. Gotham owes much to cop procedurals like Law and Order and the work of Frank Miller, but it wants more than anything to be noir. And as stylish and gritty as it is, this city never breathes. There’s so much noise and so little atmosphere that you just feel like you’re watching the action in a series of rooms and not in a city with its own iconic identity. Everything feels so rushed. And that's a shame, because the best Batman stories are the ones where you can the feel the fabric of Gotham itself, rough edges and all, rather than just look at the grime on the surface.

Gotham got a full series order after it was announced, so the series will have plenty of time to develop its characters after it premieres on September 22nd. But for the show to truly find its way, it needs to do more than just take what we know and put a new spin on things. It has a chance, since there’s some good here worth expanding while the bad can be improved over time. But for this show to really work, Gotham City needs to feel alive.