The Expendables 3 comes out August 15th in thousands of theaters across America. I watched it Friday afternoon on my MacBook Air on a packed train from New York City to middle-of-nowhere Connecticut. I watched it again on the ride back. And I'm already counting down the days until I can see it in IMAX.

Last week, torrent sites lit up with a high-quality Expendables 3 screener, which almost never happens before a big movie's release date. Much hand-wringing ensued: Will the leak kill its chances in the box office? Will everyone who might otherwise pay $17 to watch Sylvester Stallone And His Merry Men blow things up just download the movie instead?

Two hours and six minutes later, I'm pretty sure it's going to be the opposite. Leaking a month before its release might just be the best thing that ever happened to The Expendables 3.

Never has a movie been so tailor-made for theaters. The Expendables 3 gains nothing from careful introspection; Sylvester Stallone wrote a movie that is 100 percent pure, unfiltered spectacle.

It's mindless, and I mean that in the best way: I could spoil every single second of the movie and it wouldn't diminish its appeal in the slightest. The action starts early and never stops, allowing you to breathe only when Stallone makes a not-funny funny joke or Wesley Snipes makes creepy-crazy eyes. And the explosions — oh, the explosions! There's a flying motorcycle and a pretty girl and a lot of guns and a bunch of tanks and a lot of abandoned buildings and basically every other thing a good action movie could have.

This movie isn't a film — it's a show

It's meant to feel big and bombastic. You're supposed to jump every time the bad guy appears, to cheer every time a new superstar joins the gang for some more exploits. It's a movie meant to be experienced with a group of strangers, pumping your fists together as a bunch of ragged old men try to save the world from (ragged old) bad guys.

Really, The Expendables 3 isn't a film. It's a show. A greatest-hits concert, a band of legends getting back together for one more night to show that they've still got it. (They do. Oh boy, do they.) And that's not something you'd want to watch on a 13.3-inch MacBook Air or even a 47-inch TV. You go see it live. Or in this case, you see it with a big screen, thundering Dolby speakers, a dark theater, a 64-ounce Coke, and a popcorn the size of your chair. And Junior Mints.

@piercedavid the theater itself, the company of people with you and watching with and the genre of the movie

When George Lucas and Steven Spielberg said moviegoing will someday be more like a sporting event, they must have had in mind movies like The Expendables 3. It's worth seeing in theaters because the spectacle trumps the content, not because that's the only way to see it. It's obvious in the way the film is shot (tight, moving, disorienting), the way it's scored (loud, loud, loud) even the way it's cast. This movie is meant not to be watched but to be experienced. As art becomes commoditized experience becomes the only thing worth paying for, and there's evidence everywhere that we'll pay for it when it's worth it. We don't want to pay for access, but we'll gladly pay for experience. Those that won't (and there are certainly some) will be served with easier ways to get and watch movies at home. Those that will, will get something remarkable for their money.

This movies begs for that something remarkable. Enables it. I watched The Expendables 3, but it doesn't feel like I really saw it. I watched a two-hour trailer, really: it showed me just enough to entice me to want to see more. A lot more — and a lot bigger.

@piercedavid the ability to see a big action flick with special effects on a big screen. Can't get that at home on a 42" screen.

One for the fans

Critics are going to hate The Expendables 3. They hated the last two, they'll hate numbers four through forty if they get made. They hate most movies like this one, and with plenty of good reasons. But The Expendables 3 isn't a terrible movie, unlike X-Men Origins: Wolverine, the last high-profile movie to leak well before its release date. (Wolverine was slightly but demonstrably hurt by the leak, if only because it gave downloaders time to say, "Hey guys that movie sucks don't go see it.")

It's not thoughtful or complex, but it's fun as hell

It's not a complex, deep, or particularly thoughtful movie, but it's fun as hell. It's a series of set-piece action scenes, like levels in a video game, that culminate in one of the most sprawling and exciting fight scenes I've seen in a long time. That's good enough for me, and likely for everyone else who's seeding the movie right now on The Pirate Bay.

The people who have downloaded a leaked torrent of the movie are, almost certainly, the series' most fervent fans. They're the ones most likely to go see it in theaters, the ones who turned the two previous films into a $600 million franchise. And sure, maybe some of them won't pay $13 to see it again. But many of them will, because they'll realize how much they missed the first time. Many of them will also spend the next three weeks telling everyone they know how awesome this movie is, how Rotten Tomatoes is full of it and that really The Expendables 3 is two-plus hours of near-flawless action porn. They'll tell their friends to go back and watch the other two movies before this one comes out. They'll get all their best bros together and go to the theater to watch a movie that is basically 300 with way more guns and way fewer visible abs. 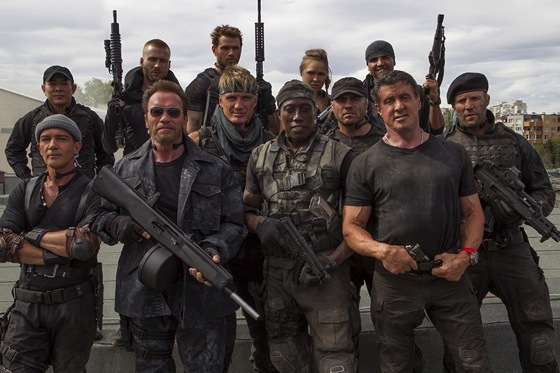 Maybe last week's leak will finally make theater owners realize that they're not competing for content exclusivity anymore. They're competing on the feeling you get sitting in front of a wall-sized screen while Jason Statham no-look tosses a knife into an unsuspecting military officer's chest. The feeling you get when the whole audience goes bananas at Schwarzenegger's oh-so-subtle "get to the choppa!" or when Harrison Ford first appears, in full sneer, on the screen. Those are the moments that make it worth going to the theater in the first place, and this movie is filled front to back with those moments. They're just shells of themselves on my MacBook screen and in my Bose headphones. Maybe one leak will change the industry, maybe it won't. But it won't hurt The Expendables 3.

I can't wait to see it again

About 40 minutes into watching the movie, a 30-something guy wearing a tie walked past me on the train and tapped me on the shoulder. "Is that Expendables 3?" I told him yes, and that it's awesome. "Man, I gotta see it. You lucky dog, man." He lingered a second, watching over my shoulder, then kept walking down the aisle, shaking his head. "You lucky dog."

He won't be the last person I tell to go see The Expendables 3 when it hits theaters in August. And I'll be there with them, opening night. I know the setlist now, I know all the songs by heart, but I still want to see the show.