Barrage your target with fun facts about cats

Two and a half years ago, a Reddit user named frackyou decided to pull a prank on her teenage cousin, who had posted on Facebook that "he was bored" while offering up his phone number as a plea for entertainment. What proceeded is the stuff of internet trolling legend, with a series of texts purporting to be from an SMS service called "Cat Facts" that would deliver "fun daily facts about CATS!" every hour. Of course frackyou's cousin never signed up for such a thing; each text was being drummed up by frackyou, and the reactions and attempts to unsubscribe made for cringe-inducing entertainment. 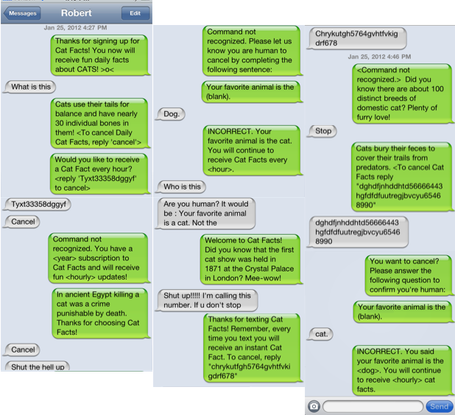 Now CatFacts is real. There's a service named CatFacts that does, in fact, deliver cat facts, complete with a way to anonymize yourself from your target — for a price at least. It's the creation of Kyle Venn, a former developer for PayPal and RunKeeper, who has put together an Android app designed to do one thing, and one thing only: send cat facts. You either pick to send from your own number (which is free), or from an anonymous number, which uses up credits. You get five credits to start, which are good for one fact each, then you need to pay for more using in-app purchase. There are different rates, starting at 99 cents for 25 credits.

Venn says he didn't make the app to make money. "It is merely a project I started in my spare time just as a hobby," he says, adding that the code for it will be put on GitHub for others to use. 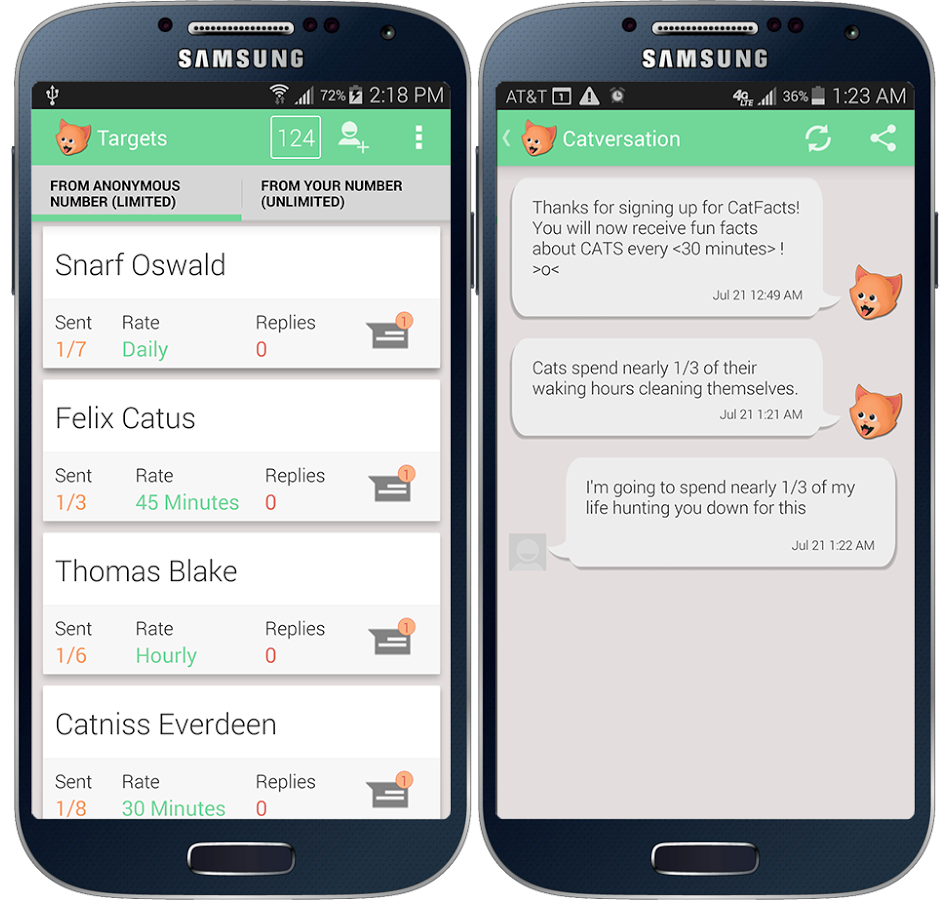 This is not, of course, a useful service. It is a very polished way to troll other people. You can, for instance, change the rate at which messages are sent, and see your vicim's text replies when you're sending from the anonymized number. And those facts will just keep coming, like a relentless tide (at least until you run out of credits). Though unlike the original prank, which made unsubscribing impossible, you can unsubscribe from this one by going to Venn's site and dropping in your phone number. Typing in "unsubscribe" or "please make it stop" does not currently work.

As for the original prank that started it all, frackyou told The Verge that it kept her cousin going for about a day. "He was really desperate to stop it ... [he] was probably worried he'd be in trouble if it was charging him. He also called my number and left desperate voicemails. Too funny."