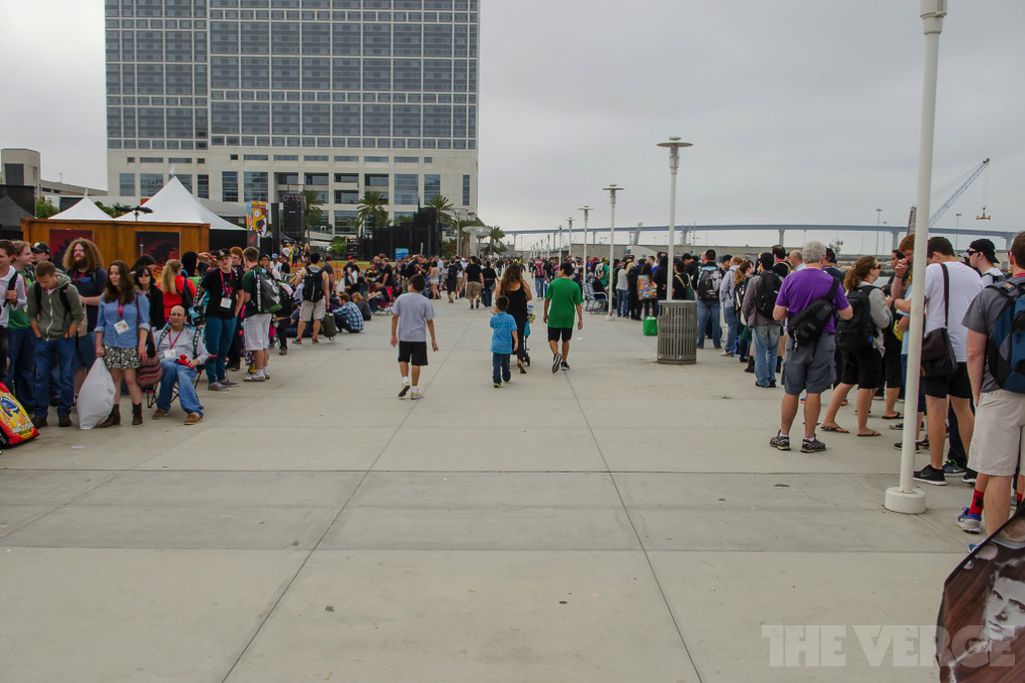 San Diego Comic-Con is an impossible place, because everything that’s terrible about it is basically mitigated by everything wonderful about it. The annual gathering brings together tens of thousands of geeks to celebrate their fandom as movie studios market upcoming blockbusters with exclusive trailers and clips. On one hand you spend incalculable amounts of time in line; on the other, you meet George R.R. Martin. There is nothing easy or relaxing about the biggest event in all of fandom; everything feels more or less like a fight. But then you win a few fights, like securing a seat inside Hall H for the day, and by the end you feel like you could do it again next year. Maybe.

For my first Comic-Con, I decide to jump in with both feet. At 3:30AM on Thursday morning, I wake up and get in line for Comic-Con’s biggest venue, Hall H. The lineup for the day is a mix of things that no one could possibly care about (clips from Penguins of Madagascar) and things that will probably be cool (a mystery presentation by Paramount Pictures). Surely something interesting will happen inside. But first I have to get in.

We are in loose sweatpants, hoodies pulled over our faces, stuffed into sleeping bags or passed out in lawn chairs

Outside the convention center, everyone looks more or less homeless. We are in loose sweatpants, hoodies pulled over our faces, stuffed into sleeping bags or passed out uncomfortably in lawn chairs. I half expect to see a group gathered around a garbage fire watching Netflix; instead I find the end of the line, and miraculously, I am only a few hundred people back from the beginning. To my front and rear there are small groups of women, some who have come alone and others who have come with friends, and they prove to be great company over the next several hours as we do the only thing you really can do in the Hall H line, which is wait.

While we wait we talk about:

A little past 10AM, after nearly six hours in line, the actually pretty-well-organized security forces of Comic-Con let us into the hall, congratulating us as we stream into the cavernous space. I immediately lose track of all my line companions and forget their names and what they looked like. 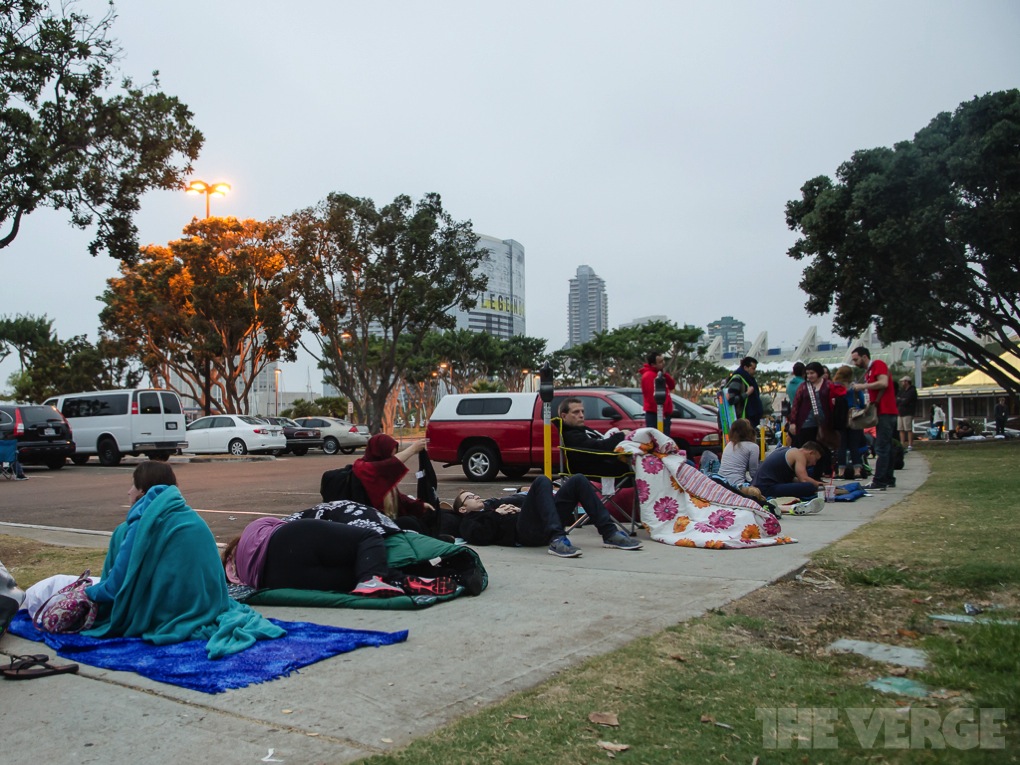 "I’m here because I’m afraid of Jeffrey Katzenberg!" Craig Ferguson is saying. This is a joke aimed at industry insiders, who laugh because they know that the Dreamworks chairman is a terrifying figure who could have them all rendered to a CIA black site, if he wanted to. Ferguson is our host for a panel presented by Dreamworks, the poor man’s Pixar. They show us clips from an animated movie starring Rihanna as a no-nonsense tween and that guy from Big Bang Theory as a fussy alien. At one point Rihanna’s character accidentally destroys Paris, which seems like good fodder for a radio single.

The next movie is Penguins of Madagascar, which is a spin-off of the third sequel to Madagascar. I am prepared to hate this movie, but then everything they show us turns out to be pretty funny, including an opening scene featuring a faux-nature-documentary voiceover from a self-parodying Werner Herzog. The first three Madagascar movies made enough money that they were able to get John Malkovich to play an octopus and Benedict Cumberbatch to play a fox, the latter of which feels a bit on the nose. Twenty minutes or so into this panel, Malkobatch (as I decide to call the couple) saunter out to feign enthusiasm over their involvement. My sole takeaway from all this is that Benedict Cumberbatch is indescribably beautiful, and I say so on Twitter. That turns out to be the most popular thing I tweet the entire week.

Paramount is next up, and it shows off its forthcoming reboot of Teenage Mutant Ninja Turtles. Since the arrival of the tone-deaf first trailer, we have all assumed this film will be terrible, and the clips they show us in Hall H this day confirm it. The film takes place inside an uncomfortable terrorist nightmare where paramilitary goons take over the subway and shoot automatic weapons at everything. The director can’t decide whether the turtles should do Christian Bale as Batman or Michelangelo from the 1980s cartoon ("Cowabunga!"). Megan Fox (April O’Neil) and Will Arnett (April O’Neil’s co-worker or something) come out to narrate a clip where they are trying to make a getaway inside a semi truck that barrels down the side of a mountain for 10 solid minutes while the Foot Clan fires 100,000 bullets at them without hitting a single thing. At the end of this we are all owed an apology. None comes.

Just when I’m ready to go buy a $5 hot dog in the lobby, the lights go out and we begin to hear some narration from Hercules. And then everyone starts screaming, because Dwayne "The Rock" Johnson is making a surprise appearance at Comic-Con. I have had a 15-year-long unrequited crush on the Rock, and from the moment I see him I am on my feet and screaming and waving and in this moment I understand why someone would want to come to Comic-Con. The Rock tells us he has rented out some theaters so we can all go watch Hercules for free tonight, and we all laugh condescendingly, because none of us are giving up these seats to go watch Hercules. But it really was great of him to stop by. 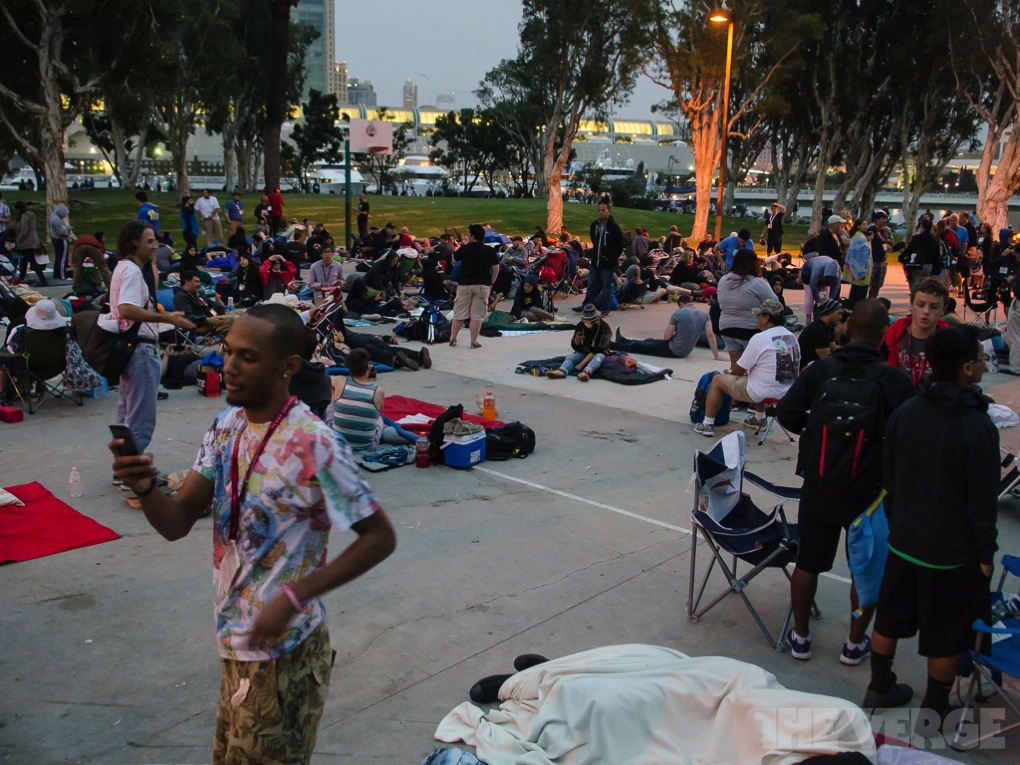 The next day I feel like I should learn something about Comic-Con, so I attend a panel called "The Future of Geek." It turns out to be a panel about the future of Comic-Con. The future turns out to be somewhat uncertain. Rob Salkowitz, the author of Comic-Con and the Business of Pop Culture, tells us that people seem to enjoy Comic-Con less each year. A majority of respondents to post-event surveys say the big conventions are too stressful and need to be better organized. "This is where the war is going to be won and lost," Salkowitz says.

I feel some of this stress when I make my way onto the show floor, which looks like every other trade show you’ve been too but bigger: more booths, more merchandise, more people. Halfway through my trip across the floor I look up and see that the cast of Game of Thrones is there signing autographs, and my heart temporarily swells as I imagine getting some face time with Jon Snow. But soon some security guards order us to walk in the opposite direction, by The Order of The Fire Marshal, a frequently invoked, never-seen figure at Comic-Con in whose name all sorts of brutality is committed. Instead of getting my face time, I wind up watching a guy get inside a grotesque pod structure to play a preview of the new Alien: Isolation game, where you play the nearly defenseless daughter of Ellen Ripley as she (the daughter) tries to avoid being killed by the alien. The guy is immediately killed by the alien. I find it deeply satisfying.

Comic-Con is going to get worse before it gets better

But like I said, every once in a while you get a win. Like a panel featuring the cast of the 1960s Batman TV show, for example. I grew up watching the reruns with my brother, and there was something undeniably cool about seeing Adam West and Burt Ward tell old stories from the set. Julie Newmar, one of the actresses who played Catwoman, is there, and at one point West says to her: "You gave me curious stirrings in my utility belt." Everyone laughs, thinking about Adam West’s old boner. A fan asks if there were any double entendres he couldn’t get away with, and West recalls a time he ad-libbed: "Don’t touch that golden pussy, Robin — it could be radioactive!"