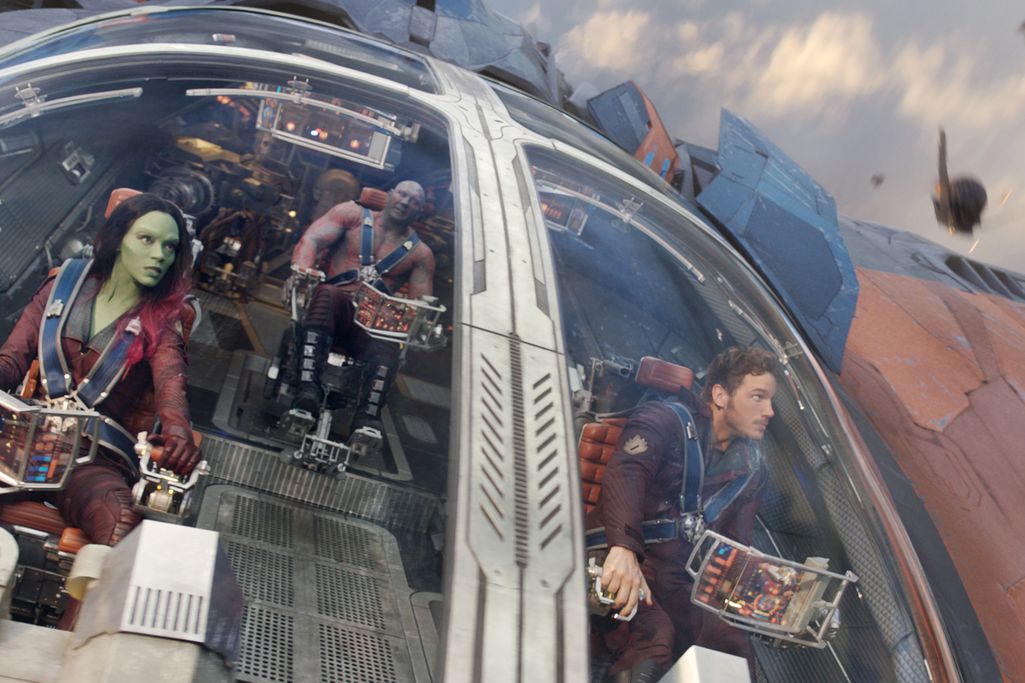 Like Pixar before it, Marvel Studios has developed a brand that transcends any particular character or franchise. That red rectangle with the white letters has become a stamp of quality, a relative guarantee that the comic-book movie you’re about to see will be worth your time and money. But also like Pixar, Marvel now has to decide how best to extend and expand that brand. Make more sequels to the films we already enjoy? Or try to branch out and invest in new stories, which brings fresh risks?

Guardians of the Galaxy shows the studio choosing the latter option, and the film truly manages to find its own rhythm and tone. More emotional than Captain America, more awe-inspiring than Thor, more genial than Iron Man, and more playful than the Avengers, Guardians of the Galaxy has the same downside as a lot of franchise-starters in that it mostly sets the table for presumably bigger future installments. But its underdog spirit, visual wonders, and decent comedic hit-to-miss ratio keep the movie from being a mere placeholder. Rather than just repeating the Marvel formula, Guardians of the Galaxy feels like a legitimate attempt to add more elements to the mixture.

Based on the comic-book series that began in 1969, Guardians of the Galaxy takes us to a universe far, far away, even though the events occur in the present. Planet-hopping adventurer Peter Quill (Chris Pratt) is a perpetual adolescent, his selfish, childish demeanor justified by the fact that when he was a boy he was abducted from Earth minutes after his beloved mother succumbed to cancer. In his latest travels, Peter has stumbled upon a mysterious orb that puts him in the crosshairs of Korath (Djimon Hounsou), a fearsome warrior who answers to the cloaked, powerful Ronan (Lee Pace). These interstellar baddies want the orb for their own purposes, forcing Peter to become reluctant partners with a group of misfits: Gamora (Zoe Saldana), the last of her alien tribe; Drax (Dave Bautista), a hulking, simpleminded enforcer; Rocket (voiced by Bradley Cooper), a genetically engineered, super-intelligent raccoon; and Groot (voiced by Vin Diesel), a sweet-natured living tree. This ragtag group must keep the orb from Ronan, who plans on using its secret powers to lay waste to the planet Xandar, where the peaceful governing body Nova Corps resides. 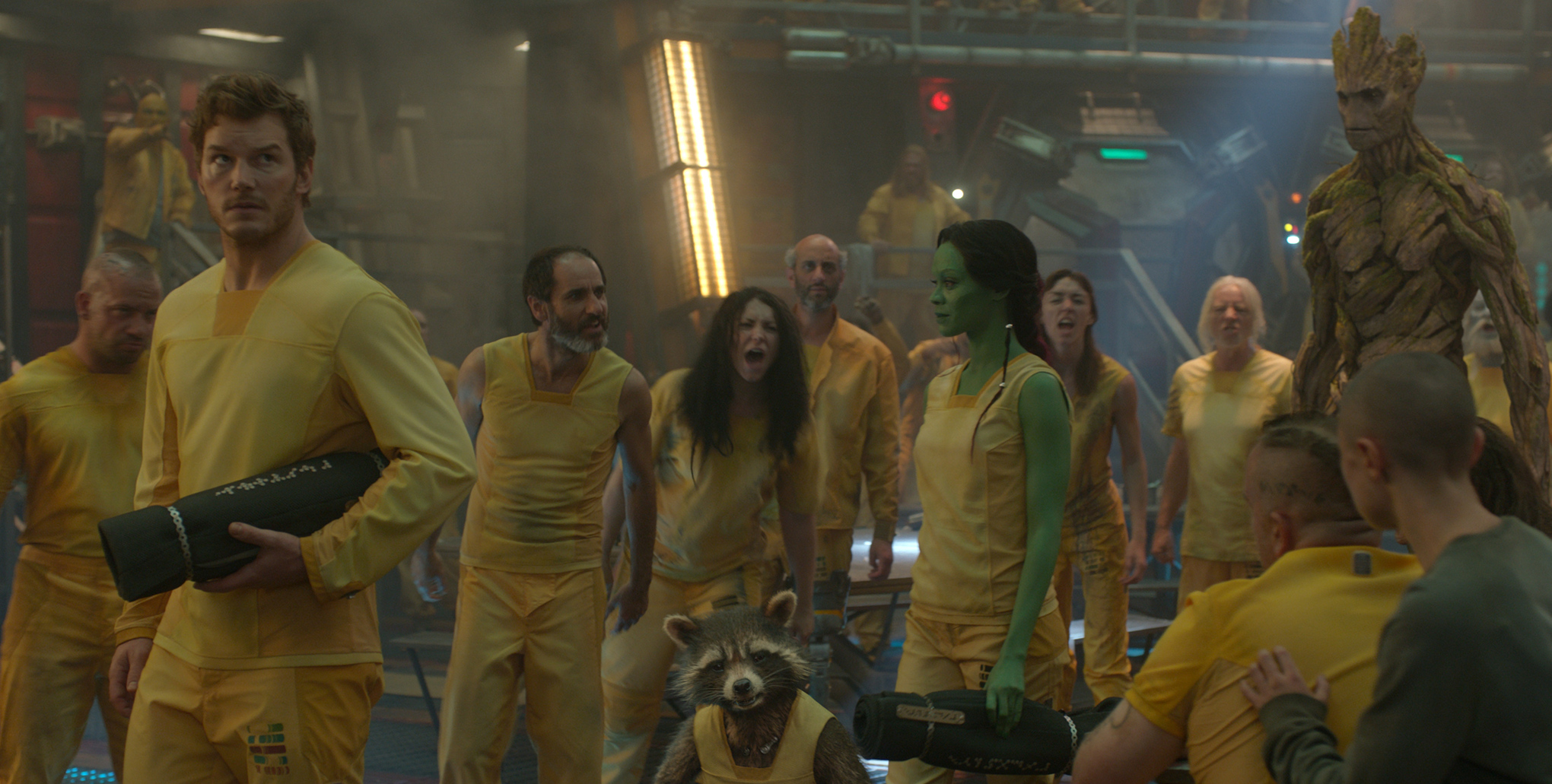 Overly complicated with too many supporting characters, including John C. Reilly’s Corpsman Dey and Glenn Close’s leader Nova Prime, Guardians of the Galaxy strains to fit in all its participants’ back stories and emotional arcs. (The Avengers had to juggle a lot of heroes, too, but at least those comic-book characters had been developed a bit already thanks to their standalone films.) Consequently, the titular protagonists are a little broadly drawn, so we don’t necessarily feel like we know any of them very well. Generally, these unlikely guardians are all one-note screw-ups and fools, their manner either bitingly sarcastic or achingly sincere.

Their behavior is, in fact, a perfect reflection of Guardians’ filmmaker. Director and co-writer James Gunn previously made the horror satire Slither and the indie anti-comic-book flick Super, rough-around-the-edges genre films that demonstrated their creator’s love of B-movie jolts, black comedy, and well-meaning dolts. Guardians of the Galaxytakes all that and throws it onto a grand sci-fi canvas. Gunn’s film wields a smart-ass, self-mocking tone that both thumbs its nose at the story’s spectacle while simultaneously seeking out moments of genuine pathos. The only possession Peter has from his old Earth life, for example, is a Walkman that contained a mixtape of classic-rock songs compiled by his mom, which become the film’s de facto soundtrack.

With its gorgeous panoramic shots of ships cutting through the sky and bodies floating lifelessly in deep space, Guardians of the Galaxy has an interstellar scope that dwarfs most Marvel movies. And yet, the beauty of its different locales — grimy prison colonies, ominous curlicue spaceships, sparkling utopian cities — is repeatedly leavened by Gunn’s whiz-bang enthusiasm for putting together enormous set pieces. If Avengers filmmaker Joss Whedon is Marvel’s geek prince, then Gunn is its overgrown, nerdy kid, relishing the opportunity to have his characters mouth off and kick ass.

Unfortunately, such wiseacre tendencies have their limits. In the spirit of protagonists who are nobody’s idea of action heroes, Guardians of the Galaxy can, like Slither and Super, sometimes feel too meta for its own good: a riff on a comic-book movie that’s a touch too pleased with how irreverent it is. Likewise, the humor can be a tiresome relay of so-so putdowns and weak retorts as Pratt and his fellow actors struggle to bring zing to limp laughs. That’s especially unfortunate since Pratt is surprisingly well cast as Peter: Like his lovable character Andy on Parks and Recreation, this space ranger is a man-child who means well, a deadpan dullard who’s so harmless you can’t help but root for him. As for the rest of the cast, few are as impressive as the effects around them. Despite the hefty budget, Guardians of the Galaxy is undeniably a lower-profile entry from Marvel, the sort of film the studio can roll out only after hitting it big with Iron Man and Captain America movies. At worst, you can say this new film can’t quite compete with its predecessors. But granting that, it’s impressive what Marvel can do with even its second-tier material.