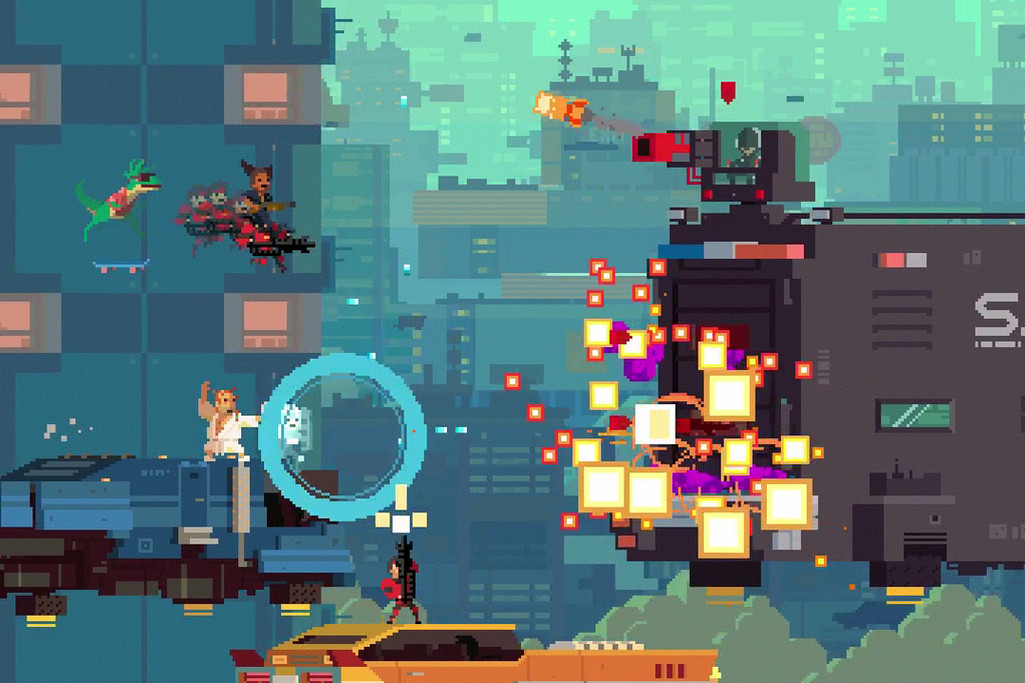 About half a year ago, Sony and Microsoft started trying to convince people to spend several hundred dollars on powerful new consoles. Generational shifts don’t happen that often in the video games industry, so when they do, it’s natural for people to wonder about the potential of the hardware or how eye-popping the graphics will be.

But things are a little different these days. The best game on the Xbox One right now is the frantic, blocky side-scroller Super Time Force (above), and you could make the same case for TowerFall: Ascension on the PlayStation 4. Both of these use pixel art — the chunky 2D graphical style that harkens back to the ’80s and early ’90s — and the upshot is that it’s okay for new games to look old again.

But why has this happened? Have pixels proved themselves as the building blocks of a legitimate art form, or is it all just a retro fad?

Pixel art was more or less essential throughout the ’80s due to the low-powered hardware of the time, but saw a rapid decline with the introduction of 3D-capable home consoles like the Sony PlayStation and Nintendo 64. But in the second half of the last decade, pixel art started coming back in the shape of retro revivals like Contra 4 and Mega Man 9, games that felt like they’d been made 15 or 20 years earlier. The Nintendo DS was a particularly good canvas for pixel art, and the concurrent rise of download services on home consoles proved another great fit for 2D games. That’s something that’s only likely to continue with the ease of indie publishing on newer consoles and mobile platforms; games with lower budgets naturally suit simpler graphics.

The style doesn't have to signify nostalgia

But while the term "pixel art" is often used synonymously with "retro," the style doesn’t have to signify nostalgia — or vice versa. Some of the most retro games around eschew pixel art entirely, in fact. Shadow Complex has all the trappings of a AAA title that uses the Unreal Engine and features the voice of Uncharted’s Nathan Drake, but it plays almost exactly like Nintendo’s 1994 classic Super Metroid. Nintendo’s own New Super Mario Bros. games blend detailed 2D graphics with 3D characters, but the postmodernist title says it all — it’s a throwback to the NES and SNES Super Mario titles before the Nintendo 64 changed everything. Now Nintendo saves its 80s pixel art for original titles like Mario Maker and NES Remix, placing the aging sprites in a brand-new context.

Instead, pixel art is best thought of as video gaming’s most characteristic visual style, one that was forged throughout the history of the medium and is inextricably linked to it. "I’m interested in making work that feels visually at home on a computer," says Jason Rohrer, whose experimental indie games like Passage (above) and Gravitation were among the first to bring the question of "games as art" to a wider audience. "I don't want to make things that look like watercolor paintings or crayon drawings, for example. I came to see pixel art as a kind of digitally native cartooning." In Passage, the pixels themselves can be seen to serve a storytelling purpose, with glitchy effects and simple color changes helping to show how the protagonist shuffles through life. 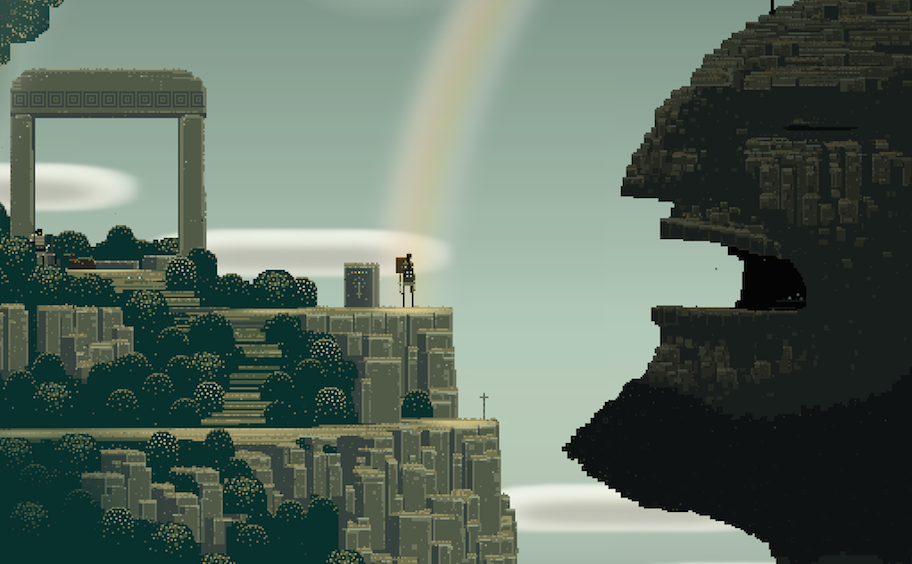 It's clear that there's more going on with most of these games than simple revivalism. "Our goals are never to rely on nostalgia as a way to create positive reactions to our art," says Nathan Vella, co-founder and president of Super Time Force and Superbrothers: Sword and Sworcery EP (above) developer Capybara Games. "Certainly, nostalgia is a factor with pixel art, but it isn’t the beginning nor the end of the style. We believe that pixel art is just that —­ an art style,­ no different than realistic 3D or traditional 2D. It can be interpreted and manipulated differently by every artist, resulting in wildly different aesthetics under the same general umbrella."

Canabalt creator Adam Saltsman doesn’t think that pixel art always gets a fair shake. "The whole ‘retro’ or ‘8-bit’ attitude toward pixel art is kind of a blessing and a curse," he tells The Verge. "It's hard for people to take pixel art ‘seriously’ the same way they take 3D seriously sometimes. But then you get brilliant counter-examples like Papers, Please, which almost no one would describe as ‘retro’ or ‘8-bit’ despite the pixelated presentation."

And despite the common "8-bit" label, few games with pixel art aim to emulate a specific console or hardware era. (The recently released Shovel Knight and its meticulous recreation of NES technology is an outlier.) The art is instead used as a form of visual abstraction that can appeal to a wide variety of players. "Cartoons hit the sweet spot between the pure representations of photographs, which are extremely specific, and the pure abstractions of symbols, which are extremely generic," says Rohrer, citing Scott McCloud’s seminal work Understanding Comics. "Pixel art hits this same expressive sweet spot, but in a purely digital way."

"Pixel art doesn't always spell everything out," agrees Saltsman. "It can be pretty minimalist and evocative that way. Often when you are looking at pixel art you are seeing more than is actually there." Less is often more: the more detail an artist adds to a character, the less freedom the player has to "fill in the blanks," as Vella puts it. "For Passage and Gravitation, I actually experimented with various resolutions for the characters," says Rohrer, who tried sprites of 8 x 8, 16 x 16, and 32 x 32 pixels. "As I added more detail through more pixels — noses, ears, and fingers, for example — I found that they became more and more specific looking and less easy to identify with." Ultimately Rohrer decided to go with the simplest characters, featuring one-pixel eyes as part of a 2 x 2 face.

One example of pixel art’s versatility is The Hunger Games: Girl On Fire (above), a mobile game developed in part by Saltsman and released alongside the first movie in the blockbuster franchise. It’s a simple, fun, endless runner that plays a little like Canabalt with less platforming and more bows and arrows, but its most striking element is the pixel art that’s a thousand times more appealing than a low-polygon rendering of Jennifer Lawrence would have been. "It was important to me that we sort of distinguish the game from other ‘movie games,’ to make it stand out but also to make it clear that this is a game first, not just a marketing vehicle or whatever," says Saltsman.

The principles of pixel art can be applied to 3D games, too. Ed Key’s Proteus (below) is one such title: a gorgeous and relaxing adventure that sees you explore a mysterious island, with a rough graphics engine and stark color palette reminiscent of the Atari 2600. It’s quite unlike anything else — as if the hardware of yesteryear had grown in power while our vocabulary for visual expression remained frozen in time. "It's definitely an attempt to sidestep the graphical arms race (and general expectation of ‘progress’ and fidelity), whilst at the same time acknowledging that my technical graphics skills are very limited," says Key. "But at the same time, constraints — even self-imposed — are excellent for fostering creativity." It’s a theme echoed by Vella: "I also think that some of the best work comes within limitations, and seeing artists push those limitations as far as they can."

"A pixel art game like 'Passage' will never age visually."

Another advantage of sidestepping the march towards ever more realistic graphics is that blocky pixels don’t age at all — if your game’s main character could have been rendered on a Sega Saturn in 2D, it’s going to look as good in 10 years as it does today. "A pixel art game like Passage will never age visually," says Rohrer. "It's coarse enough that you can examine its visual structure directly — there's no pretense of optical illusion, and therefore no illusion that can become compromised over the years." Key says much the same: "I hope that in 10 years time Proteus would still look interesting and striking, rather than just a step in the path towards realism." It's easy to believe; after all, the original 8-bit Super Mario only gets more iconic with age. 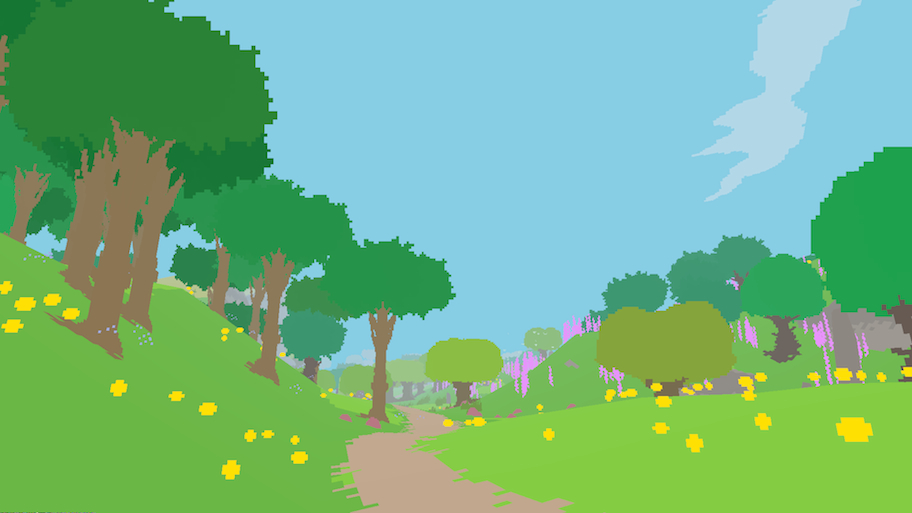 But that’s not to say that there’s no room for further innovation or expression within the form. "There are so many talented pixel artists that I would be flabbergasted if we weren’t surprised time and time again with how far, and how wide, the medium can be pushed," says Vella, who cites games like Sword and Sworcery and Hyper Light Drifter as examples of pixel art works that no one saw coming; the latter game is a neon-streaked, Kickstarter-funded RPG that's impossible to imagine on hardware from the last millennium. "As long as someone tries to do something totally bonkers in pixels, we’ll see it last," says Vella. "Would Super Time Force look the same if we had started it 20 years later? Who knows. But I am certain that pixel art is neither a fad, nor a static medium."

"I am certain that pixel art is neither a fad, nor a static medium."

As video games’ most defining visual style, pixel art is here to stay, even if it might not give your PS4 the best workout possible. And there’s no telling where the form might go next. "I am certain there are a group of gamers who are turned off by a game using pixel art on their fancy new Xbox One or PS4," says Vella. "And that’s totally okay. Art is entirely subjective, and people like what they like. We’re not worried about the players that don’t care about our games, or our art. We care about those that do."