And now for something completely different

Andrew Mason has a flair for the unexpected. When the former CEO of Groupon left the daily-deals company he co-founded last year, his farewell blog post seemed to satirize the entire genre of corporate goodbyes. "I’ve decided that I’d like to spend more time with my family," he wrote. "Just kidding — I was fired today. If you’re wondering why… you haven’t been paying attention." The once high-flying Groupon had fallen to earth shortly after it went public, and amid lackluster earnings, Mason was ousted. Newly free of responsibilities, he wrote and recorded Hardly Workin’, an album of motivational rock songs aimed at cubicle drones. (Praise for the record seemed to top out somewhere around "competent.")

Mason’s next act is also something of a surprise. Last year he and Yishai Lerner, the former director of mobile engineering at Groupon, founded Detour, a company that produces and will ultimately sell high-quality audio tours of cities around the world. Detour is launching in private beta today for iPhone, with four tours available for San Francisco. Mason says he started thinking about audio tours before founding Groupon, during a trip to Rome with his wife. Large guided tours are impersonal and often drag on for hours, he says. After downloading an audio tour to an iPod, he became convinced they were the future of travel. 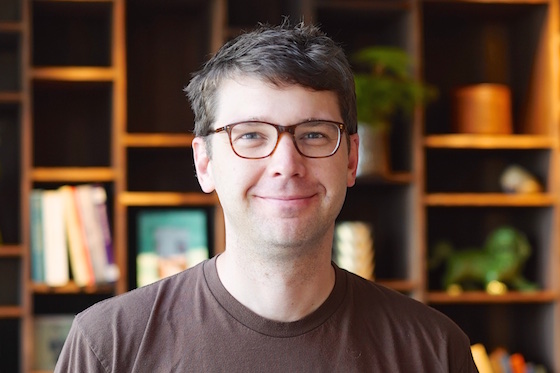 On a sunny afternoon in San Francisco, Mason and I meet up in the North Beach neighborhood to try it out. The lightweight app comprises just a few screens, all designed to get you to your tour. (For beta testers, the tours are all free; eventually they’ll sell for less than $10 apiece, Mason says.) On this day we’re taking the Beat Generation tour, which recounts the adventures of Jack Kerouac, Allen Ginsburg, and their contemporaries during a walking tour of North Beach and Chinatown. We meet at Vesuvio, and Mason hands me an iPhone with Detour loaded. The app syncs audio between our iPhones so that we’re always hearing the same thing.

It sounds like a particularly good episode of This American Life

For the next 20 minutes, we hike through the streets of San Francisco learning about the Beats — where they wrote, where they drank, and where they stumbled home afterward. A compass on the app points the way in case we get off track, and with one tap we can see a map of where we're headed. The tour, which is narrated by a radio host and producer named Ninna Gaensler-Debs, is fantastic: punctuated with interviews by living Beats, including Lawrence Ferlinghetti, and set to a lively jazz soundtrack. It sounds like a particularly good episode of This American Life, only Gaensler-Debs is hyper-focused on physical location: she’ll mention that you’re walking by a souvenir shop, or that there are live turtles in the butcher shop just ahead.

At one point, she mentions that a shop owner in Chinatown is sometimes outside playing his violin; as soon as we come around the corner, there he is, playing "The Star-Spangled Banner." "I walk around and think of places in the world differently than I did when I started this," Mason says. "You know there are beautiful stories and reasons behind everything that you’re seeing, even if you don’t know what they are."

Mason being Mason, Detour can also get weird. One of the tours available at launch is a cupcake tour of the tony Marina District narrated by "philosopher Ulrich Fürst," who in reality is a friend of Mason’s doing a dead-on impression of the filmmaker Werner Herzog. "While you feast on delicious local pastries, Ulrich questions the metanarrative scaffolding that supports your sensorial enjoyment," reads the description, which describes the neighborhood as a place "where capitalism is fueled through the parasitic symbiosis of indulgence and restraint." It is insane in the best way.

Unlike Groupon, Detour is poised for slow growth: producing high-quality audio tours takes time. It’s avoiding tours for museums for now, Mason says, mostly because he doesn’t enjoy museums. For now, Detour will only produce tours for the Bay Area; it’s currently working on an architectural tour and a collaboration with the publishing house McSweeney’s, among other projects. Mason won’t say when the app might launch to the general public, although you can sign up today at Detour.com. An Android app is forthcoming.

Insane in the best way

Mason isn’t the first with the idea for something like Detour — MyTours and Soundwalk both offer platforms for audio tours. Detour (which collaborated with Soundwalk for one of its tours) hopes to stand out through the quality of its tours; it also plans to offer tools to let you easily build your tours next year. Eventually, the company hopes to host and sell tours from around the world. Mason has invested $3 million of his own money to launch the company; he has a team of seven working on the app.

Detour has a long road ahead of it, and the company seems unlikely to fetch the $6 billion acquisition offers that Groupon once fielded from Google. But Mason says he’s just happy trying to get people out of the house. "So many companies seem to have this shared endgame of getting you sitting on your couch in your living room, having your food delivered, having your laundry brought out and sent back, talking to your friends on your Oculus Rift," he says. "Maybe I‘m being a Luddite, but I kind of like life’s rough edges. I want Detour to be a company that helps take people out there and celebrate them."