A North Korean defector sees his art silenced in China

Sun Mu's paintings satirize the Pyongyang propaganda he once produced

Share All sharing options for: A North Korean defector sees his art silenced in China

Look at us, by Sun Mu. The text translates as, "Let us endure hardship with a smile!"

An exhibition of works by a former North Korean propaganda artist was cancelled this week in China, reportedly under orders from the Chinese government. As AFP reports, Beijing's Yuan Dian gallery was planning to show a collection from Sun Mu, a North Korean defector who uses a pseudonym for fear of retribution from Pyongyang. The month-long exhibition was due to open on July 27th, but according to South Korea's Yonhap news agency, Chinese police blocked people from entering the gallery and removed Sun Mu's paintings just before the opening.

Officials gave no reason for the closing, though China has a long history of censoring both media and art, and it remains North Korea's most important ally. China is North Korea's biggest trade partner, supplying the isolated dictatorship with food and oil, though there have been signs of strain between the two countries since Kim Jong Un ascended to power in Pyongyang. The exhibition scheduled to open in Beijing this week was titled "Red White Blue" — a reference, organizers said, to the national colors of the six countries involved in talks over North Korea's nuclear program. 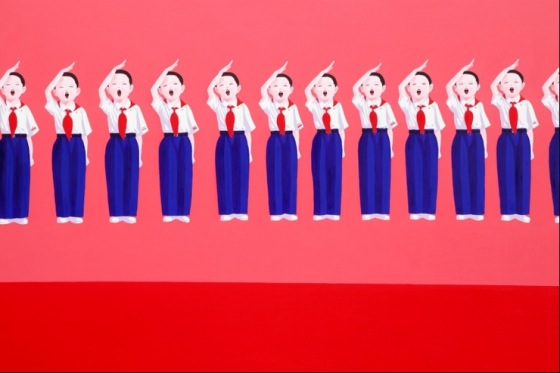 Sun Mu, for his part, said simply that the Beijing exhibition was "not being held as planned," and declined to give further details. "I need to figure out the situation first," the artist told AFP. "I can't talk too much right now."

Sun Mu fled North Korea in 1998 and settled in Seoul in 2001. He grew up singing songs of praise for the Communist regime and, while serving in the army, was trained to create propaganda posters for the government. Much of the work he produced relied on familiar tropes — images touting North Korea's military might, coupled with impassioned slogans calling for citizens to defend their leaders at all costs. 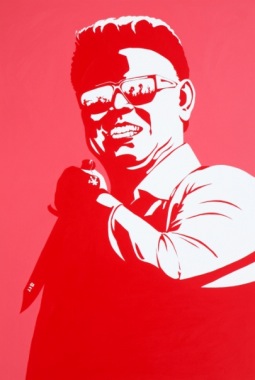 He decided to escape following a devastating famine during the mid-1990s, and soon embarked on a more subversive artistic path, producing satirical paintings in the same propagandistic style he had come to know so well. One features an image of the elder Kim wielding a knife, a maniacal grin spread across his face; others include bold slogans like "Open Korea." Some are more subtle in their commentary on the notoriously hermetic state — a North Korean schoolgirl screaming with joy while listening to an iPod or drinking Coca-Cola.

Sun Mu's works were met with some confusion at first; when he exhibited paintings in Seoul in 2007, some interpreted it as true Communist propaganda, and alerted South Korean authorities. His irony has become more apparent, though, and today his paintings reportedly fetch as much as $20,000 a piece.

Yet Sun Mu continues to shy away from the limelight, for fear that revealing his identity may jeopardize the safety of his relatives in North Korea. In South Korea, he's known as the "faceless" painter because of his refusal to be photographed.

To date, his most famous work is Happy Children — a series of paintings of North Korean schoolchildren wearing identical smiles. The figures are chilling in their uniform, robotic glee, but Sun Mu says they're very much rooted in reality.

"They teach you how to smile that regimented smile — there’s a certain way to shape your mouth," he told the New York Times in 2009. "We children thought we were happy. We didn’t realize that our smile was fabricated and manufactured." 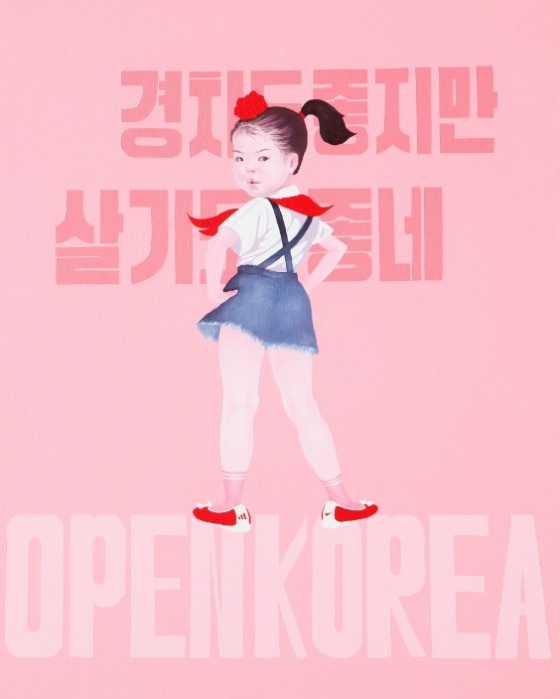