The cult classic is now a graphic novel, and it's excellent

Roadhouse was born from willful procrastination. "I'd just started renting a studio I couldn't afford with no real idea what I was going to do,” Ganjei tells The Verge. "I had Road House streaming off Netflix on my laptop. I'm not sure why, but rather than turn it off I figured I'd use it as the source material for some drawing." After recreating a few frames from the movie, it became clear that the next logical step was to do the entire movie. "A handful of drawings would be some hipster drivel, but a minute-by-minute reimagining would take the movie as a basis and turn [it] into something else."

Before long, Ganjei had 70 drawings covering scenes throughout the movie's two hour running length ("I got slightly carried away," he explains), and some three months later those 70 had become 185 beautifully crafted pen-and-ink frames. He then set about captioning the frames, treating each as individual artworks. Rather than relying on dialogue from the movie, Ganjei chose to fill the majority of his book with musings from the likes of David Foster Wallace, Michel Foucault, Jean Baudrillard, Richard Pryor, and others including himself. Of course, there are some quotes from the movie in there, but they’re few and far between. 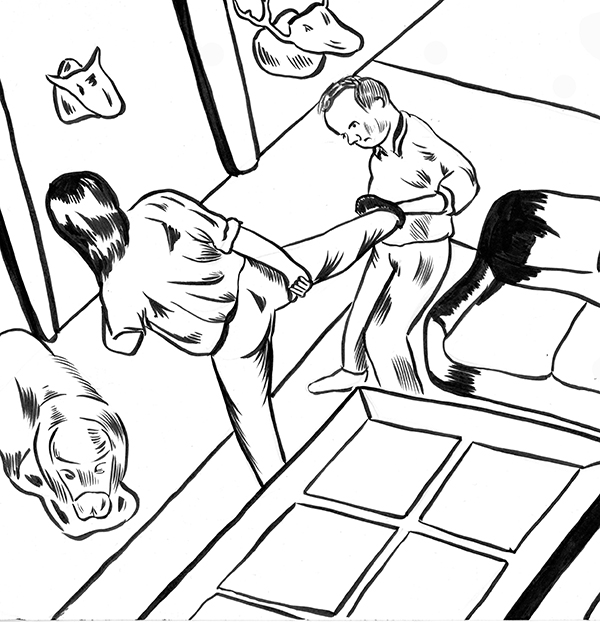 It's this juxtaposition of familiar scenes and seemingly disconnected captions that makes Ganjei's creation perhaps the best graphic novel I've read since Persepolis. I call it a graphic novel, but it might be easier to describe Babak Ganjei's Roadhouse as a twisted, adult take on a Disney read-along storybook. Streaming Swayze's throat-ripping antics from Netflix while flipping through a companion book filled with quasi-philosophical musings is a truly unique experience.

You can pick up a copy of Babak Ganjei's Roadhouse from its independent publisher Records Records Records or directly from the artist's site, where you'll also find his past work like the semi-autobiographical Hilarious Consequences comic. At the moment, Ganjei is gauging the reaction to Roadhouse, but he isn't ruling out giving other questionable movies the same treatment. "I quite like the idea of Police Academy, and I just watched 48 Hours for the first time. [It's] aggressively macho, racist, sexist, you name it. That could work."

The past is a ghost, the future is a dream and all we ever have is now
Most Popular
From our sponsor
Advertiser Content From