Half the price, but none of the aluminum

Share All sharing options for: The HTC One E8 is a plastic phone in search of its metal soul

Plastic phones have a bad reputation and HTC is partly to blame. The company that defines itself as “a global leader in mobile innovation and design” has, for two years running, built the finest Android smartphone with an all-aluminum thing of beauty it calls the One. First the One M7 swept up the phone design awards in 2013, and now the more refined One M8 is repeating the feat. In an Android world dominated by frumpy-but-functional Samsung Galaxy phones, HTC’s One line stands out with its premium materials and tasteful design.

HTC has undoubtedly raised the bar for high-end phones and challenged everyone else to match it, but the company can’t afford the luxury of writing off plastic phones altogether. It tried to do so last year by introducing aluminum handsets to its midrange with the One mini and One max, but the only thing those unsatisfying devices proved was that compromising design was a worse idea than compromising on materials. Now the Taiwanese company is trying the alternative approach by sacrificing the premium metal construction in order to retain almost everything else about its flagship phone. The HTC One E8 is a faithful plastic copy of the One M8, trimming away a few peripheral features and nearly halving the price in the process. That makes it the perfect device with which to explore a pair of related questions: can premium design transcend premium materials, and can anyone make a cheap phone that still feels special?

For many people, the matter of premium plastic is one that’s already been settled. The Nokia N9, the Moto X, and the iPhone 5C are just three recent examples of plastic phones that can stand up to scrutiny and comparison against the very best on the market without feeling the need to apologize for anything. The Moto X still has the best ergonomics of any phone on sale today, the 5C has successfully translated the iPhone user experience to a cheaper device, and the N9 has spawned an entire family of Lumia handsets replicating and iterating on its considered design. Even HTC itself has the Windows Phone 8X and 8S of 2012 as evidence to show that plastic need not mean plebeian. But can it ever truly be considered premium?

"Metal, right now, stands above everything else out in the industry in terms of getting that visceral reaction," says Scott Croyle, the person responsible for HTC design over the past few years and the architect of its move toward aluminum unibody phones. There’s instant recognition in a metal’s cold touch and "just the way the light reflects off that brushed surface" tells people they are handling a high-end device. Croyle doesn’t believe that impactful first impression can be recreated with lesser materials and the E8’s look and feel corroborate his views. 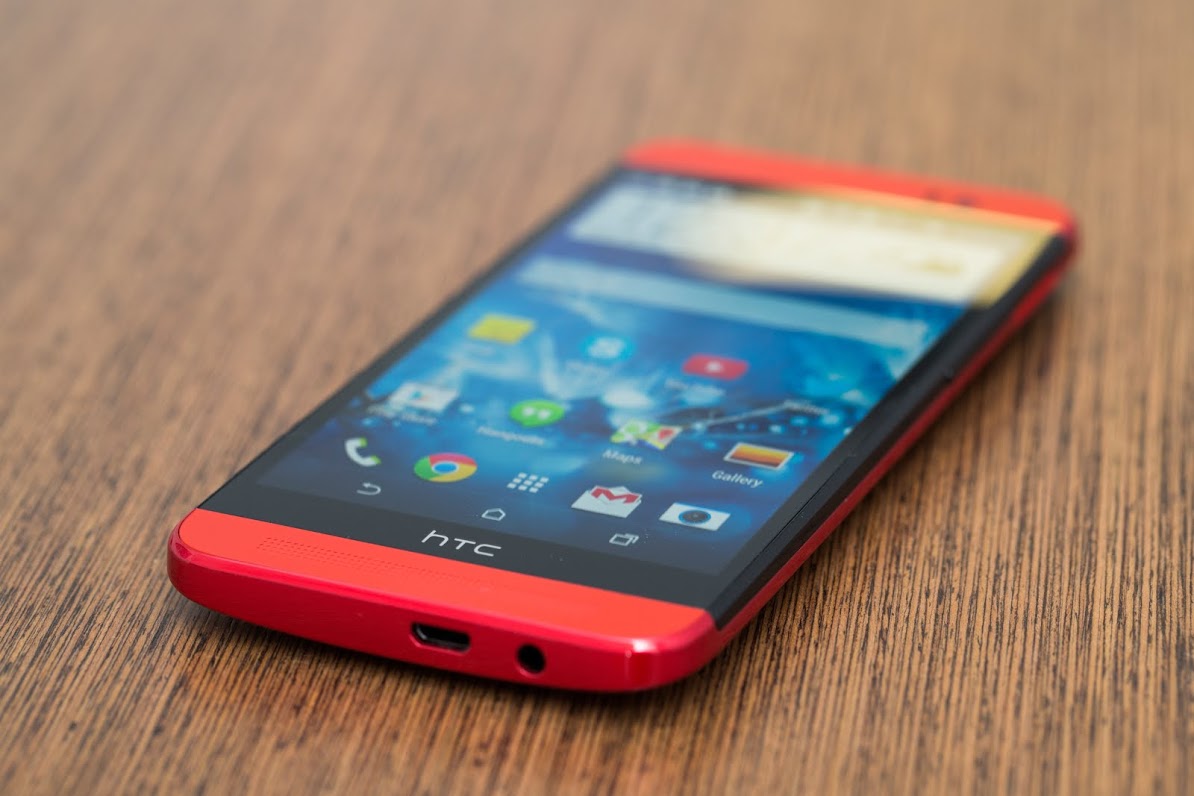 More Nexus 5 than HTC One

HTC’s new phone is the exact same size as the M8 it’s emulating, but its curves aren’t as soft or refined, its edges aren’t chamfered and don’t glint in the twilight, and its lesser weight makes it feel less substantial. In spite of using the M8 blueprint, this new device feels closer to the utilitarian Nexus 5 than it does to HTC’s flagship aluminum phone. The distinction is subtle but tangible: holding the One M8 next to your face when making a call feels like a compliment to your face, whereas the One E8 is just a large phone. It’s functional and inoffensive, but not in any way special.

Another quality that seems to remain out of reach for plastic-phone designers is that of authenticity. Metal and wooden phone cases react to the environment around them: they heat up and cool down, they warp and age and discolor. Those apparent disadvantages lend premium materials a more natural feel, making them more relatable and less alien. But more than anything, says Croyle, they allow the phone maker to engage in honest design. "Devices shouldn’t look like something they are not," he chides, and if your goal is to make a phone that feels unique and personal, you have to use the appropriate materials for the job. Samsung’s faux leather backs on devices like the Note 3 and LG’s brushed metal look on the G3 — both made out of super-thin plastic — appear to be the main subjects of Croyle’s disapproval. They are disingenuous with their users by taking on the appearance of something they are not. 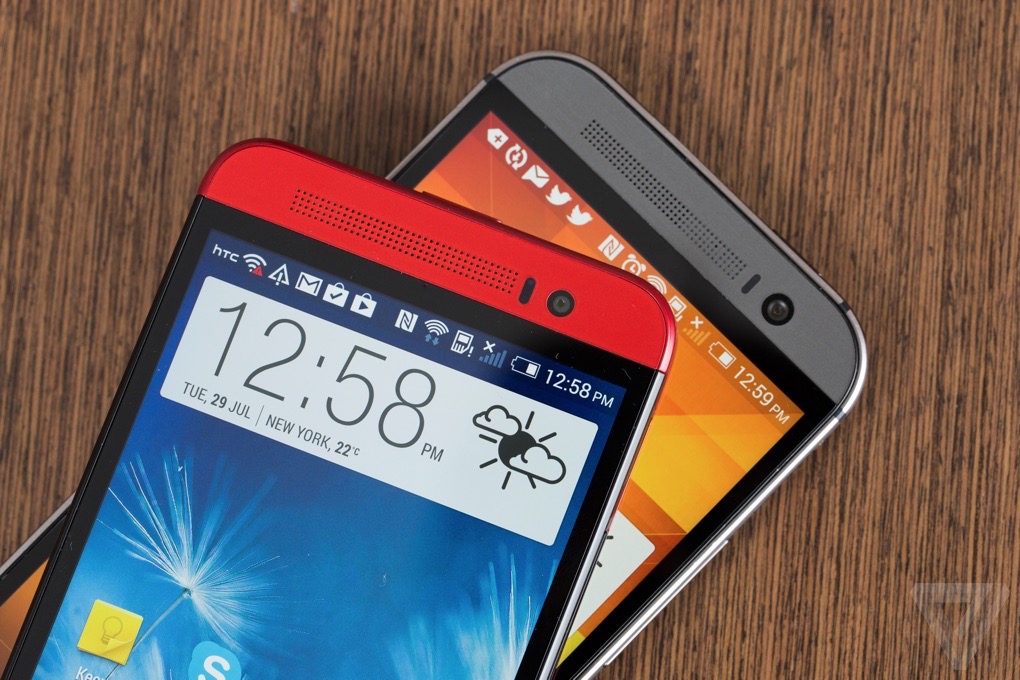 The common feature among all the good plastic phones to this point has been exactly what Croyle is asking for: a recognition of their own material limitations and a design that either ameliorates or uses them productively. In making a direct copy of its metal M8, HTC has missed the opportunity to live up to the creed of its former chief designer. The E8 does its utmost to look like the M8, even going so far as to place its LED flash in the spot where the M8’s secondary depth-sensing camera resides. It freshens up the phone’s look with new colors and a nice soft-touch surface on its matte-black variants, but otherwise it’s a cheap phone seeking to look premium rather than being so. That’s disappointing, because the software and internal hardware are almost entirely unchanged from the M8 — swapping out the underwhelming UltraPixel camera for an even poorer 13-megapixel sensor notwithstanding — which remains a contender for the best phone released this year. 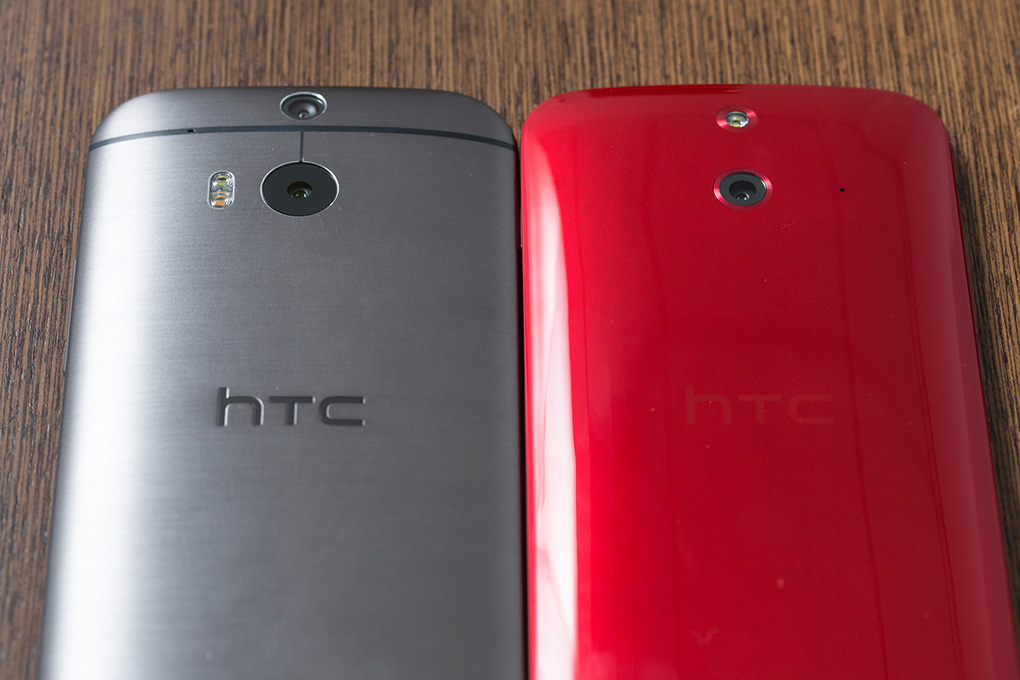 For a company staking its future on design, HTC is being awfully pragmatic

HTC has repeatedly said that design is its differentiating factor from other phone makers. Others build adequate shells whose purpose is just to carry the smartphone innards around, whereas HTC produces desirable things that are worth owning in their own right. The One M7 and M8 have been the truest embodiments of that ethos so far, but the company’s attempts to make the same experience affordable to a wider audience keep misfiring. It’s not that the One E8 is a bad phone — that would be hard to achieve when you build a new shell around the M8’s processor, display, and software — but it could have been better if it wasn’t so focused on imitating the original. HTC need only look to its own One X from 2012 to recognize a plastic-phone design that has its own distinctive and attractive look.

The reason why most phones sold today are still made out of plastic is simple: price. The HTC One E8’s drastically lower cost compared to the M8 and its nearly identical user experience will ensure that it finds plenty of interested buyers, particularly in the all-important Chinese market where the original M8 is out of reach for most people. Like the phone itself, maybe that strategy is good enough. What it’s not, however, is special. The thing that made the M8 feel like a prized possession is absent, replaced by functionality in a bland, albeit colorful, shell.

Apple made more money than ever, even with the supply chain crunch