Share All sharing options for: Why won't the FAA let students fly drones?

From the the Seattle Space Needle to a fireworks show in Florida to Martha Stewart’s farm in upstate New York, it seems like small, privately-owned drones are popping up everywhere across America these days, providing us with previously unattainable, breathtaking aerial views. They’re also causing trouble: crashing into heavily populated areas and flying uncomfortably close to hospitals and airports.

The US Federal Aviation Administration has struggled for years with how to handle the growing popularity of these unmanned aircraft while keeping people safe, but the agency’s latest attempt has raised the ire of an unusual group of critics: professors and model airplane pilots. As Paul Voss, an associate professor of engineering at Smith College who favors using small drones for teaching his students, tells The Verge: "even though we as a group are very much respectful of government, things [at the FAA] are going way too far and harming our national interest." Last week, he and some 29 other academics from institutions including Harvard, Stanford, and Boston University, submitted an open letter to the FAA outlining their complaints with a new policy the agency released last month.

things are going way too far and harming our national interest.

Voss says there’s no better way to learn about abstract concepts like aeronautics and fluid mechanics than by having students build and fly their own small drones. The FAA says in its new policy that it plans to regulate all small aircraft — from traditional remote-controlled model airplanes flown by hobbyists, to newer quadrocopters like the DJI Phantom and Parrot AR drones, which have some automation — by putting them into two main groups: those being used solely for recreational purposes ("model aircraft") and those being used for business purposes ("commercial aircraft.") 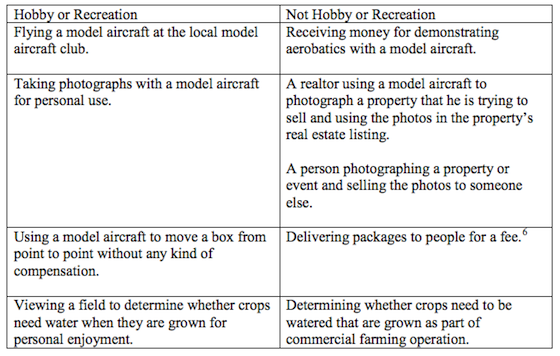 A rubric from the FAA's Interpretation of Special Rule for Model Aircraft showing different use cases for model and commercial aircraft. (FAA)

The FAA says that pilots of model aircraft can fly them whenever and wherever they want, so long as they follow some common-sense safety guidelines (like not flying within five miles of an airport). All commercial aircraft pilots, though, first need to get permission with the FAA. As the agency wrote on its website: "There are no shades of gray in FAA regulations. Anyone who wants to fly an aircraft—manned or unmanned—in US airspace needs some level of FAA approval." Those commercial pilots that don’t get approval from the agency can face cease and desist orders and fines up to $10,000.

"You can’t have the next ‘Wright Brothers’ if the only people who can get permits are established aviation folks."

It seems fairly cut and dried, but for academic institutions, the new FAA policy is a quagmire. "We have students paying tuition," Voss points out, technically making any drones flown by professors or their students "commercial" and requiring FAA permission. So far, the FAA has only granted permission for commercial drone flights over land to a few select companies: dronemakers AeroVironment and Boeing subsidiary Insitu, and the oil company BP. Both Insitu and AerVironment also happen to sit on the FAA’s rule-making committee for unmanned aircraft, raising the question of how much the new policy benefits them to the extent of incumbents. "There’s no space for innovation, no space to try something out if everyone needs a permit," Voss says. "You can’t have the next ‘Wright Brothers’ if the only people who can get permits are established aviation folks."

Model airplane pilots agree that the FAA’s language could hamper learning in classrooms at all levels. "Model aircraft have been used as a teaching tool in STEM [science, technology, engineering, mathematics] curriculum for decades," says Richard Hanson, a spokesperson for the Academy of Model Aeronautics, a large nonprofit dedicated to recreational model aircraft. He said his organization pushed the FAA to include an educational exception in its new policy, but that the agency declined.

"aircraft must be visible at all times to the operator."

In a further point of contention, the FAA’s new policy states that if a pilot uses only "first person view" to control their drone or model aircraft — looking at a video feed from the drone’s frontal camera displayed on a smartphone, tablet, or goggles, as is common with many drones and model aircraft — it automatically becomes commercial, even if the pilot isn’t getting paid. As the FAA’s policy states, model "aircraft must be visible at all times to the operator." So if you’re flying your Parrot AR drone for fun and you can still see it with your eyes, it’s considered a model aircraft and you don’t need FAA permission. But as soon as the drone turns a corner and you’re flying it only with the smartphone view, it’s now a commercial aircraft and you need FAA approval.

Not surprisingly, model airplane pilots seem to be largely against the FAA’s new policy. Among the 1,600 public comments submitted to the FAA about its new proposal are hundreds from model aircraft pilots complaining about first-person view being effectively banned.

Most problematically for Voss is the idea that the FAA’s policy states the agency can take action against any aircraft that threatens the "national airspace" — even model aircraft — and that the agency seems to have an incredibly broad definition for what is considered national airspace.

As Voss points out in the letter he sent to the FAA last week: "The [national airspace] is a term that the FAA now implies comprises all airspace in the United States, including our campuses, private backyards, and possibly even inside buildings." Attached to his letter is one the FAA sent to TornadoVideos.net in 2011, demanding the organization cease its use of drones, even over private property, until it received FAA clearance.

"There are pretty serious legal implications when we invite the FAA to preemptively take control of backyards," Voss says, later telling The Verge via email: "Everyone from Google to the backyard inventor should be paying attention — once the FAA's new view of our property gets locked in, it will be difficult if not impossible to fix." The FAA recently extended its comment period on its new policy to late September. Read the comments and submit your own here.