A new report published Wednesday claims US wireless carriers have raked in "hundreds of millions of dollars" from unsuspecting customers by "cramming" unauthorized charges onto their bills. The dubious practice often finds wireless subscribers paying for premium short message services (PSMS) they have no recollection of signing up for. Cramming has "caused consumers substantial harm" according to the US Senate Commerce Committee. But it's also proven lucrative for carriers: Verizon, AT&T, Sprint, and T-Mobile have typically kept between 30 and 40 percent of each transaction. "Third-party billing on wireless phone bills has been a billion dollar industry that has yielded tremendous revenues for carriers," the report found.

"Many of the products that were the subject of consumer complaints were charges for subscription services such as celebrity gossip, horoscopes, sports scores, love tips, and diet tips," the report said. The actual services have sometimes been offered by the carriers, but more often through small third-party companies. For years carriers have allowed these sketchy vendors to place charges directly on consumer bills instead of requiring separate payment. As a result, the recurring fees are often buried deep within wireless bills and impossible to identify — at least with a passing glance. T-Mobile drew the FTC's ire over this issue in a recent complaint focused on cramming. 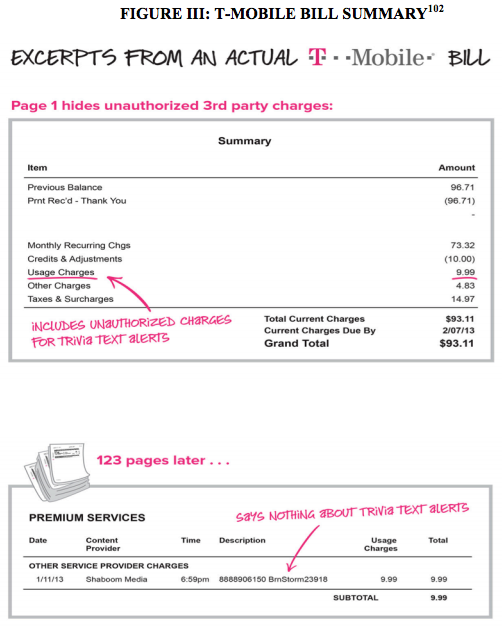 The committee report says carriers were aware cramming was a real problem back in 2008 when state attorneys general began calling more attention to the issue and reaching "best practices" agreements with Verizon, AT&T, Sprint, and T-Mobile. But their attempts to right the situation proved insufficient, and the complaints kept pouring in. Some consumers said they'd been duped into "crammed" charges thanks to web scams promising free coupons or Justin Bieber tickets in return for a mobile phone number. Others were clueless as to where the tacked-on fees came from — assuming they were lucky enough to spot them. Several major carriers have already phased out PSMS messages, but the committee says replacement technologies like direct carrier billing could potentially be vulnerable to similar scams.