The swift death of ReaganBook, the Facebook for patriots

The swift death of ReaganBook, the Facebook for patriots

If I could look back now, I would say the whole prospect fell apart after Satan poked me.

I joined ReaganBook when I saw it billed earlier this week (admittedly, on liberal sites) as the conservative response to Facebook. This was, I thought, a simultaneously wonderful and naive idea. On the one hand: shutting yourself inside an echo chamber could be a boon to both you and your friends of a different political persuasion. On the other hand: trolls. Surely a name like ReaganBook — a name devoid of any irony, part of a logo that includes an illustration of the president, cowboy hat adorned, done in the style of the Obama "Hope" image — would be bait to any liberals hoping to while away a few minutes on a fake profile. This proved to be the case. ReaganBook is already down.

"As Reagan taught us, trust, but verify."

The site requires no proof of identity (or semblance to reality) to log in, which becomes immediately obvious: everyone seems to be either using real names, the names of famous conservatives, or the names of famous conservatives paired with sex acts. Some are earnest; some are parody. Neither of these are instructive or valuable. The only worthwhile accounts are the ones that can't be parsed. Someone with a Captain America avatar invites people to talk about guns; Margaret Thatcher leaves more than 700 comments on an innocuous status. There is an eagle crying, several photos of Jesus. Someone with the user name SATAN! SATAN! SATAN! pokes me. A photo of a monkey in a bubble bath is posted, and no one seems sure what side this person is on. Everyone is confused and angry with everyone else. 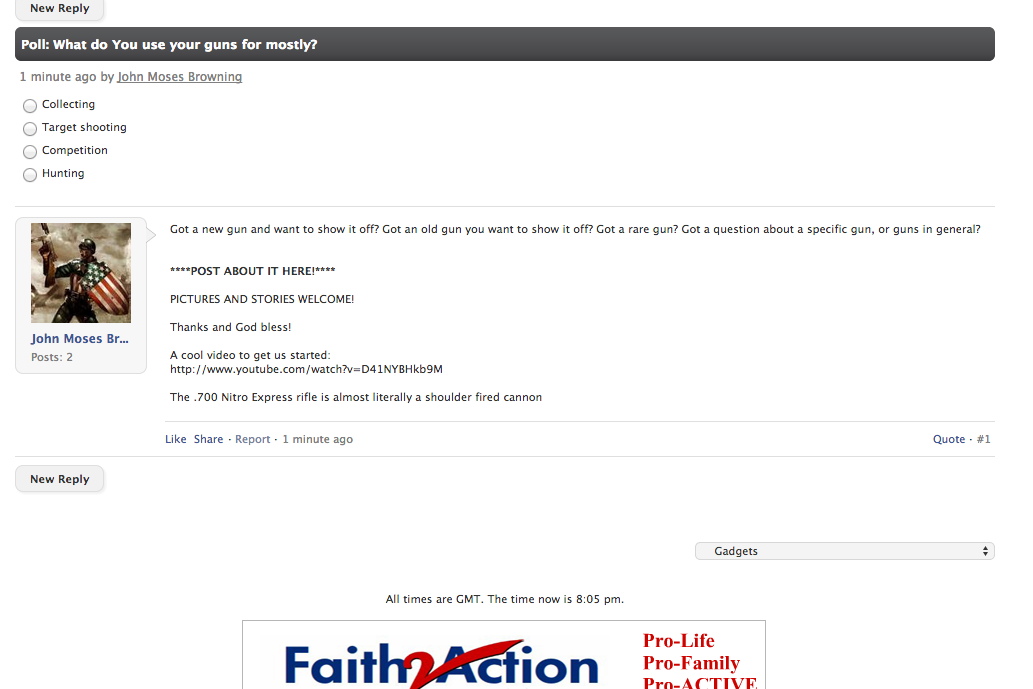 Everyone. Rather than being truly like Facebook — where you're limited to seeing the status of your friends — ReaganBook allows you to see every status update worldwide in a single homepage stream. (The site runs on an off-the-shelf version of social networking software PHPfox. The "About" section is still lorem ipsum.) This is a disaster. It's like you're on a busy bus where you can't tune anyone out, and everyone is hostile toward the bus, because the bus holds what the passengers believe to be extreme views on foreign policy.

Janet Porter, president and founder of conservative group Faith2Action, started ReaganBook. Her posts began as quiet calls to arms for conservative causes, but as the situation spiraled out of control, she became frantic: "MY SINCERE APOLOGIES FOR THE VILE CONTENT. THIS WILL BE REMEDIED IN A MATTER OF MINUTES." Below her, "Lord God" commented: "JANET MY DAUGHTER, YOUR PRAYERS ARE GOING STRAIGHT INTO MY SPAM FILTER. PLEASE TEXT ME FOR QUICKER RESPONSE." 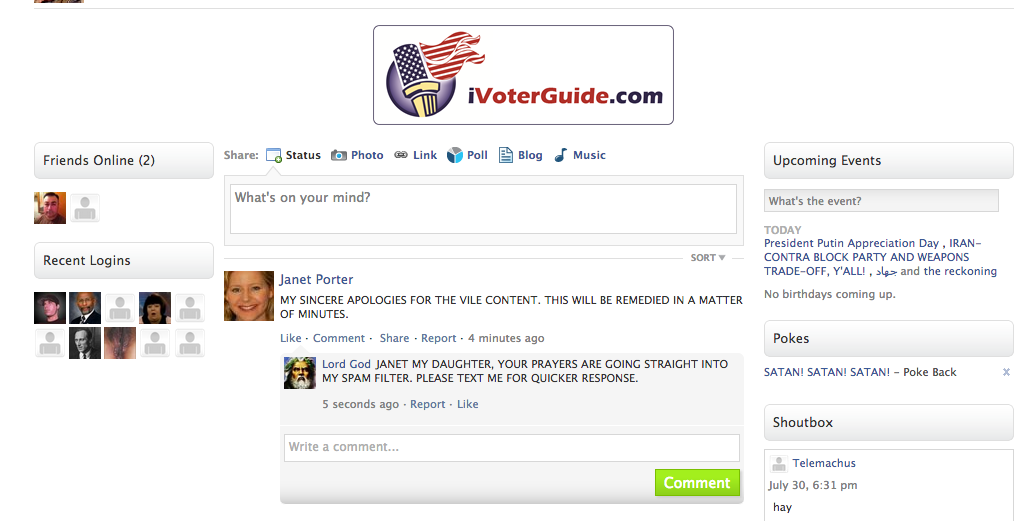 But she was right. Shortly after that status was posted, the site was turned to "Offline Mode." The gates were barred. Instead, visitors are given this message:

Thank you to all those who participated in the pre-release of ReaganBook.com Your participation is helping us build a more secure site. Thank you! Please be patient while we make the necessary changes to keep the site free from obscenity, pornography, and those intent on the destruction of life, liberty, and the family. We will be opening the doors again soon with additional protections in place. As Reagan taught us, trust, but verify.
--Management

Porter and company could have foreseen this. Other sites for conservatives have launched and are still in use, but allowing everyone to do what they will is hardly the best way to bring in an audience. Not that people won't keep trying — in an age of polarized media, it only makes sense that people would want polarized social networks.

It was fun while it lasted, though. Satan remains unpoked.