Share All sharing options for: Why the 'Deadpool' film is going to be PG-13 — and why it can still be great

This week marks the theatrical release of Marvel Studios' Guardians of the Galaxy, a PG-13 summer blockbuster directed by James Gunn, who coincidentally made one of the bloodiest independent superhero movies of the last decade (2010's Super). The reviews are glowing and the film is on track to be one of the biggest box office successes of the year.

But this week also saw the leak of test footage for the long-in-development Deadpool movie. It's a short clip originally made about three years ago to give Fox executives a taste of what they'd be financing: over-the-top violence, bizarre one-liners, and a titular character (motion-captured and voiced by Ryan Reynolds) who talks more to the audience off-screen than the thugs onscreen. It's been a movie that, as recently as last October, Reynolds was hinting would likely need an R rating to be done right (serving as a rallying cry for fans). But then this week, following the footage release, Deadpool co-creator Robert Liefeld tweeted that the revised script will, in fact, meet the standard for PG-13.

The brilliant screenplay has been equally brilliantly modified.... R is not a blockade any longer.

The move makes sense. Deadpool is one of Marvel's more potentially lucrative characters, and yet the film has remained in development limbo at 20th Century Fox, home of the X-Men film franchise, since at least 2009. Was the rating that big of an issue? What else might be holding it back? For a clue as to why, I tracked down the movie's "first leak" — a draft of the script written by Zombieland scribes Rhett Reese Paul Wernick that appeared briefly online back in 2010.

For those who don't know Deadpool, think of him as a human Looney Tunes character with two katanas and an obsession with guns. He's hypertalkative, chock full of crass one-liners, and completely devoid of any moral reservations over murder. His explicit superpower is self-healing (up to and including regenerating entire limbs), but arguably more powerful than that, he can break the fourth wall. Deadpool's most defining characteristic is being aware that he's a character. 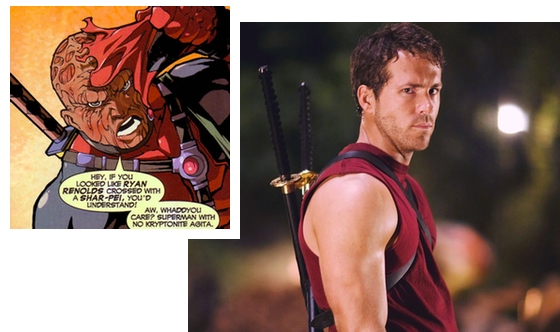 The early script was an origin story of Wade Wilson, a mercenary-for-hire with terminal cancer who's recruited for a mysterious government project known as Weapon X (the same one responsible for covering Wolverine's bones and claws with adamantium), which turns him into the character Deadpool. So far, that's a facsimile of every superhero film. Here's where it differs.

First, the script is very, very violent. There are scenes of extreme physical and mental torture. Bad guys are shot in the head at point blank range (or, as the test footage showed, decapitated). At one point in the script, when a bad guy puts a gun to a little boy's head, Deadpool responds by pointing a gun at the kid's sister. It ultimately resolves without any bloodshed, but you're still left with a protagonist who doesn't hesitate to threaten violence on a child. There's a physical ugliness, too: under the mask, which stays on for most of the film, his face is covered in horrific scars (not exactly movie poster-friendly for Hollywood). He isn't driven by a sense of duty so much as revenge — it just happens to be against villains.

There are a lot of reasons films get stuck in development, but it's a good bet that this one's potential R rating had something to do with it. The financial difference between PG-13 and R is huge for studios, especially for superhero films, which need the under-17 demographic. The highest-grossing R-rated film in 2013 was The Heat with $159 million. Fourteen films did better, including Thor: The Dark World ($206 million), Superman reboot Man of Steel ($291 million), and Iron Man 3 ($409 million). Comparatively, that same year the R-rated superhero flick Kick-Ass 2 grossed less than $30 million overall.

But can Deadpool be Deadpool with a PG-13 rating? Yes, he absolutely can.

Wolverine impales people with his claws on film ALL the time, withdraws with NO BLOOD with great favor & success. Difference between R/PG-13

One of the main differences between PG-13 and R is the amount of blood and gore, not the violence itself. A study published earlier this year from the Annenberg Public Policy Center of The University of Pennsylvania found that "there is essentially no difference between the most popular movies rated PG-13 for younger viewers and restricted, R-rated films in showing main characters engaged in both violence and alcohol use or violence and sexual behavior." New York Times critic A.O. Scott seems to have a lot of fun trying to explain the difference between PG-13 and R, which sometimes comes down to whether or not you see blood.

So Deadpool can be ultra-violent at PG-13 so long as you go easy on showing the spilled blood and brain matter. His defining characteristic isn't related to violence, anyway — it's that he's self-aware. That's quite possibly the strongest superpower of them all: Deadpool knows he's a character in a story. In the comics, he constantly breaks the fourth wall, talking to the reader and arguing with the writers and artists. In one issue, he even tries to go back a few pages to warn his past self about a disaster. That's powerful without being graphic. It's also a chance to critique the entire superhero film genre, at a time when all entries follow similar formulas down to the post-credits scene that ties it all together to some bigger mystery. (Indeed, that's my gripe with the 2010 draft: while it had a lot to say about Deadpool's portrayal in 2009's X-Men Origins: Wolverine, through voiceover and other various winks and nods, the script otherwise didn't really play around with the potential.)

Is that DP will happen eventually, 5-6 years, and as frustrating as that sounds it would still be faster to screen that Spidey, X-Men and FF

That's how you make a Deadpool movie at any rating. It's not the graphic nature of the violence. Just make sure he's aware of the limitations, be it genre or rating, and has something to say about it.