Share All sharing options for: Windows Phone will soon render websites a lot more like an iPhone

Microsoft has tried to push standards with its mobile Internet Explorer browser, but unfortunately the wider web largely develops specifically for the webkit rendering engine and the iPhone. That’s left a lot of mobile websites not rendering properly in Internet Explorer mobile, and a frustrating user experience. Twitter and a number of Google web sites do not render correctly in Windows Phone, but Microsoft thinks it has an answer. With the upcoming Windows Phone 8.1 Update 1, Microsoft is tweaking its mobile browser to better support sites that were designed for an iPhone. The approach means Microsoft is adding non-standard web platform features, but the result is a much better experience for Windows Phone users.

Some of the changes involve correcting problems where Internet Explorer is not recognized as a mobile browser, or times when web developers use old and proprietary webkit-prefixed features. All of these issues result in Windows Phone displaying a web site that’s not fully mobile optimized, or doesn’t render correctly at all. Microsoft isn’t giving up on web standards in favor of webkit, but it’s certainly a step back and recognition of the reality of mobile websites today. Mozilla does similar fixes for Firefox, and the two companies are collaborating to record broken sites at webcompat.com. Ironically, Microsoft’s issues are not too dissimilar to the ones its rivals faced in the Internet Explorer 6 era, when the software maker ignored web standards back when it was the dominant browser. 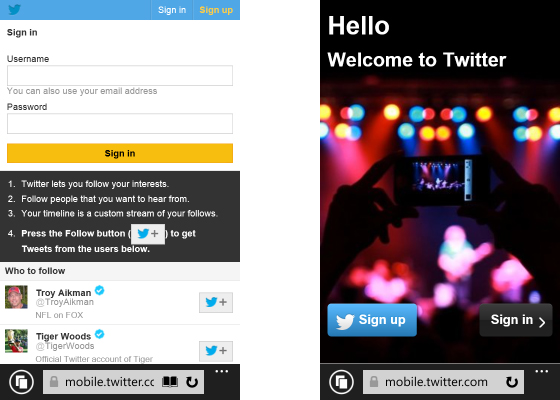 Before, left, and after with Windows Phone 8.1 Update 1, right.

Microsoft estimates that its changes will improve more than 40 percent of the top 500 mobile websites in Internet Explorer. The company has posted a number of sample images, with Twitter, Baidu, The New York Times, Answers, and Macy’s set to benefit from the changes. It’s not clear if Google Maps and Gmail, which render badly on Windows Phone, will benefit from the changes, but Windows Phone users will certainly benefit from a lot of mobile sites rendering properly in future.