Actually, he didn’t really downplay them — he just didn’t up-play them as much as his predecessor, General Keith Alexander, who called the leaks "the greatest damage to our combined nations’ intelligence systems that we have ever suffered" and is going around calling Snowden a Russian spy.

By contrast, the new guy is playing it cool. Rogers has been on the job for about three months, and he’s been exceedingly diplomatic and measured. "A broad dialogue about what we’re doing and why is a good thing for our nation," he said at the Bloomberg Government Cybersecurity Summit. "I don’t question that for one minute." 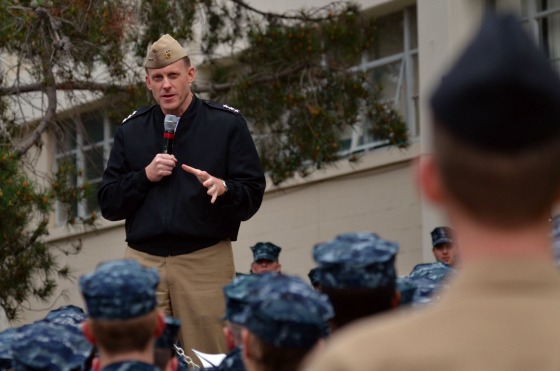 In addition to serving as the face of public relations for the Defense Department's "silent service," Rogers has taken on two formal roles that come bundled with the NSA director position: head of the Central Security Service, another arm of the US’ 17-tentacled intelligence apparatus, and commander of US Cyber Command, the hub of the military’s cyber efforts.

That means one man is in charge of the NSA’s domestic and foreign surveillance, along with defending US government networks, coordinating cyberattacks against enemies, and supervising what is essentially the security IT department for the rest of the Defense Department.

Hometown: Born in the Chicago area; lives in Washington, DC.

Profile: Rogers graduated from New Trier East High School in Winnetka, Illinois, where he "managed to avoid signiﬁcant notice or accomplishment" but "enjoyed participating in the performing arts and broadcasting" while "gaining a group of friends with whom he remains close to this day."

Rogers wanted to go to the US Naval Academy — he'd wanted to be a Navy officer ever since he was young — but couldn’t get in. He ended up in the Reserve Officers Training Corps program at Auburn University, where he was bad at math and dropped calculus. He became a Surface Warfare Officer after graduation, a rank for junior officers just out of college. His redesignation to cryptology a few years later started his career in intelligence.

The young officer worked his way up through the Navy’s ranks, eventually serving as director of intelligence for the Joint Chiefs of Staff and then head of the US Tenth Fleet and Fleet Cyber Command, the Navy’s cyber-warfare force. There he fought off around "100 probes," or cyberattacks, a day, including those from one Iranian hacker who twice prompted an organization-wide email shutdown and was "driving the Navy ... nuts" (he or she was never caught). Rogers liked to refer to his men in the Fleet as "Jedi knights."

Rogers is a manager. He likes to build teams. "I can lead," he told a class of high schoolers at his alma mater. "I can bring groups together. I can motivate people."

He acknowledges being groomed for the NSA position. When he was nominated, he reasoned that he owed it to the military to step up even though Snowden’s revelations had put the agency in a "tough spot." "Now it’s payback time," he told his wife, Dana, according to a military press release. "What kind of leader, what kind of teammate would I be if I turned my back?"

The new NSA chief has spent his first three months appearing at conferences, meeting with other agencies, and dialing back the government's rhetoric about Edward Snowden. (Rogers still believes the former NSA contractor is "arrogant," however.) According to Rogers, Americans' expectation of privacy is being weakened because of cellphones and online services, not because of domestic surveillance.

Quote: "If you are not excited by the opportunity that cyber represents to the Navy … then you do not have a pulse."

Rogers seems like a level-headed, analytical thinker not unlike President Barack Obama, who signed off on his nomination. It’s too early to guess what he’ll do, but so far he seems willing to at least pretend to engage the public about the NSA’s activities and submit to new limits on its power. He also seems ready to compromise. But with the agency facing more scrutiny than ever, he'd have to be.