Normals are 3D-printed earbuds made just for you

At $199, custom earbuds are finally within reach

Share All sharing options for: Normals are 3D-printed earbuds made just for you

Nikki Kaufman doesn’t think our ears get enough attention. Headphones come in a hundred shapes and sizes, but almost none of them are made to fit you. But Kaufman, a founding member of Quirky, a New York-based inventions lab that specializes in 3D printing, thought she could do better. Today she’s announcing a pair of 3D-printed earbuds called Normals with the tagline "one size fits none." With Normals, no two earbuds are alike — not even your own.

Normals are far from the first custom earbuds on the market, but most will cost you several hundred dollars, and getting fitted can get messy. "The doctor squirts silicone in your ear, you clench your jaw for 10 minutes, and three to six weeks and $500 to $2,000 later, you get a pair of custom in-ears," says Kaufman. "It’s cumbersome and inaccessible to everyday consumers." Instead, you take a few photos of your ears using an app, and Kaufman’s company, aptly named Normal, will print and ship you a pair within 48 hours — all for $199.

Normals aren’t particularly handsome or modern in their own right, but they're certainly eye-catching. Kaufman worked with Pantone on several new colors for Normals that you can’t find in any other products, but even a simple red, yellow, or blue would’ve made them distinctive in a sea of black and white headphones. Inside the Normal app you can change the color of the drive housing, plug housing, remote, cord, and soft-touch plastic "earform" (the part that’s made to fit you). There’s also Normals’ replaceable cord, which you can get in black or clear. You can flip the cord up around your ear (if you’re running) or down (for most other purposes).

You can also pick a name to laser-engrave on your carrying case, a small box constructed to mirror the shape of your earbuds and cradle them perfectly. All together, Normals aren’t much like any other headphones you can buy in their price range. According to Kaufman, it’s only possible because of the company's business model, which combines a self-serve app (the only way to buy a pair) with new 3D-printing tech. The model saves money for users, who don't have to spring for a fitting appointment, and for Normal, which prints each earform using a mostly conventional 3D printing method. "Nobody wants to stick anything in their ear," she says. "3D printing allows us to do it quicker, precisely, and based on a photo." 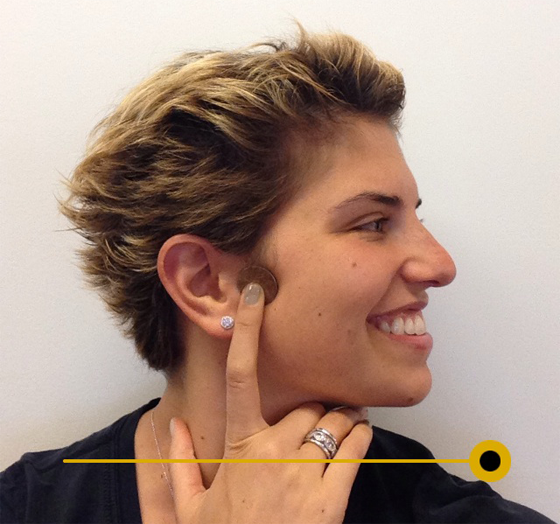 Normal went through many iterations of its app, which has to make shooting a photo of the side of your head less tricky than it sounds. The final result feels like designing a pair of NikeID sneakers, but with one key wrinkle. The app has two clever mechanism in place for helping you take photos, and for helping Normal decide how big (or small) your ears are. When you open the app's camera screen, it asks you to face forward and hold a quarter up next to each ear. Then, a dotted outline forms onscreen to show you how to frame up your head, and only then does the app tell you to turn your head directly to the side. With your head on a swivel, it’s a lot simpler to get a good shot — or so I witnessed in a few tests.

Once you’re finished customizing your earbuds, taking photos, and entering your credit card information, the app beams your specifications to the company’s Chelsea office / factory space, where nearly a dozen Stratasys Fortus 250mc 3D-printers wait to fulfill orders. The company uses the size and shape of the quarter in each photo as a scale to measure your ear openings. If all goes according to plan, you’ll have a pair of custom-fitted headphones in your hands 48 hours later. If they don't fit, Normal will craft you a new pair for free. 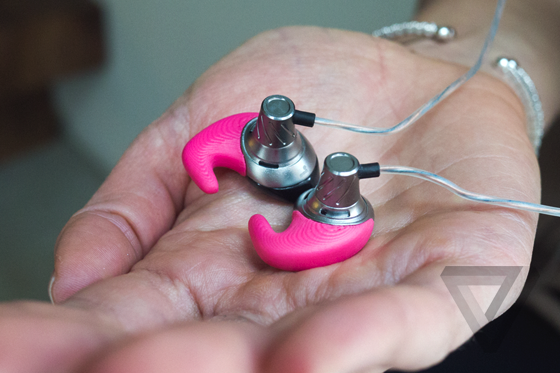 I’ll reserve judgment on the fidelity of Normals until I can try a pair myself, but if they don’t sound good, all the 3D-printing and fitting and customization would be for naught. Kaufman won’t disclose exactly who she’s enlisted to develop the audio technology behind Normals, but says that some of the company’s engineers and contractors have worked for the likes of Sonos, Harman, Skullcandy, Bose, Beats, and Shure. Kaufman realizes that $199 might be a tough sell for a product you can’t even try on, so she designed Normals to be distinctive conversation starters. Like Apple’s first-edition white iPod headphones, they draw your eye and invite questions.

Kaufman hopes to piggyback on the viral nature of headphones, which have as of late become fashion statements as much as tools for listening to music. In recent years, Koss’ crisp, '80s-esque PortaPro headphones have seen a resurgence amongst hipsters, and Beats meanwhile has brought headphone envy to the mainstream. Beats showed that even $299 is not too much to ask for a pair of stylish headphones. If Normals can transcend their gadget value and become a symbol, you might not consider $199 to be out of reach at all.

When Normal’s Chelsea office opens this August, it’s going to look a lot like an Apple Store. Bright, shining light will illuminate the all-white space; it’s part office, part retail outlet, and part factory. You can even customize your own pair of Normals in-store — with the company’s own app, of course. The aim might be to draw attention to your ears in the same way that Warby Parker has drawn attention to your eyes. Before Warby Parker, you might not have considered that buying glasses could be a good time. Before Normals, you might not have considered ordering a pair of custom headphones — or even a 3D-printed item of any kind.

Normals may not have consumerized headphones as fashion accessories, but it’s on the vanguard of something potentially much bigger. There are 3D printed bears, guns, pizzas, and flowers, but until now, nothing 3D-printed that I’d actually want to buy.