Post-apocalyptic photography with 'The Last of Us' on PS4

If video games are art, can they also be cameras?

If all Naughty Dog did in bringing The Last of Us Remastered to the PlayStation 4 was upgrade the post-apocalyptic PS3 hit’s graphics and boost the frame rate, a lot of people would have been satisfied enough. But there’s another way that the game looks better than ever: its photo mode, which lets you freeze the action at any time to compose and share beautiful still pictures. The mode is the work of Jason Gregory and Artem Kovalovs, who were tasked by the studio’s co-presidents with building upon the photo tools found in fellow Sony PS4 title Infamous: Second Son.

The developers say that while the photo mode would have been technically possible for the PS3 version, the PS4’s emphasis on social connectivity makes sharing photos a much better fit. “I do think that sharing your game experience and being social in your gaming experiences is really an underlying principle of the PlayStation 4 in general, which is why the Share button is there,” says Gregory. “Photo mode gives you the tools that you need to express yourself when you’re sharing those experiences, so it made a lot of sense and it fits really well into that ecosystem.”

“When the PS3 came out, Facebook wasn’t as popular as it is now, and there was no Twitter and there was no Instagram,” agrees Kovalovs, who calls the Share button “physical evidence of where the industry is going in general.” It does feel like the photo mode is a concept whose time has come; graphical fidelity and social integration on game consoles have converged at a time when it’s never been easier or more popular to share photography online. 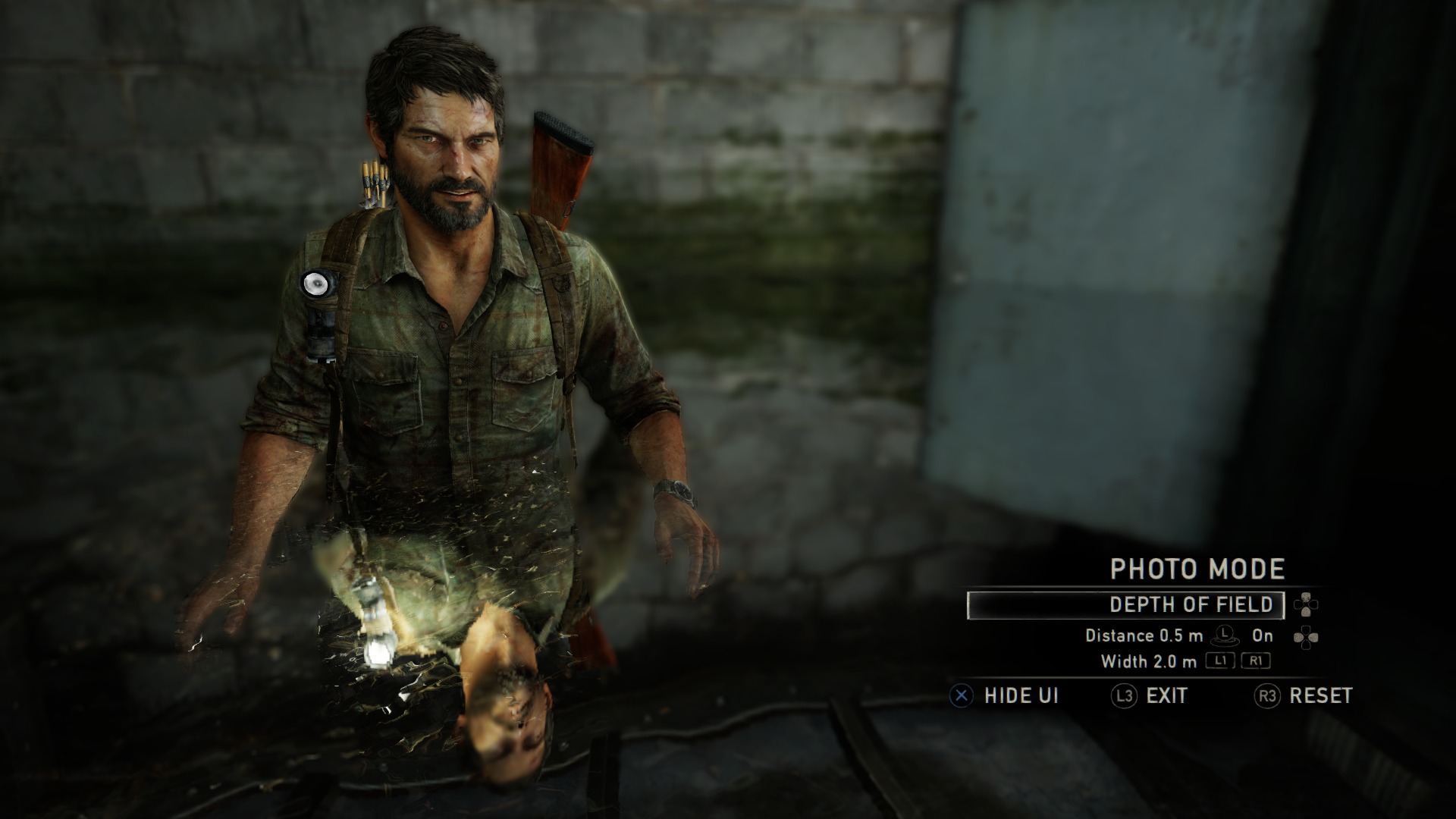 There have been similar features in the past, mostly in racing games, but there’s a lot more photographic scope when you’re moving a person around a lavishly rendered city. If there’s one thing The Last of Us does better than almost any game in recent memory, it’s the way it constructs a believable sense of place. The story is set decades after a fungal pandemic has turned much of America’s population into violent zombie-like creatures, and sees you travel across the ravaged country in hope of survival. And, as with Second Son, I found myself getting as invested in the photo mode as the game itself — the various locations are often too picturesque or dramatic not to get out your virtual camera.

The Last of Us’s mode isn’t too different to that of Second Son, but it has a few neat additions that make for a better experience overall. The ability to tweak filter intensity, apply film grain, and add vignettes means that you can even edit photos with a reasonable approximation of our recommended VSCO Cam workflow, and it’s clear that photo-sharing apps were an influence on the team’s design. "When we had our initial meeting with the co-presidents, our graphic artist, our lighting leads, and so on all had some input into it and talked about the feature sets of those kind of apps and what we want to provide here," says Gregory. "The underlying principle we came up with is: we want to provide all of those basic tools you would need to produce a great screenshot while keeping the interface as simple, intuitive, and quick to access right at your fingertips as possible. I think we found a pretty good balance between features and simplicity." 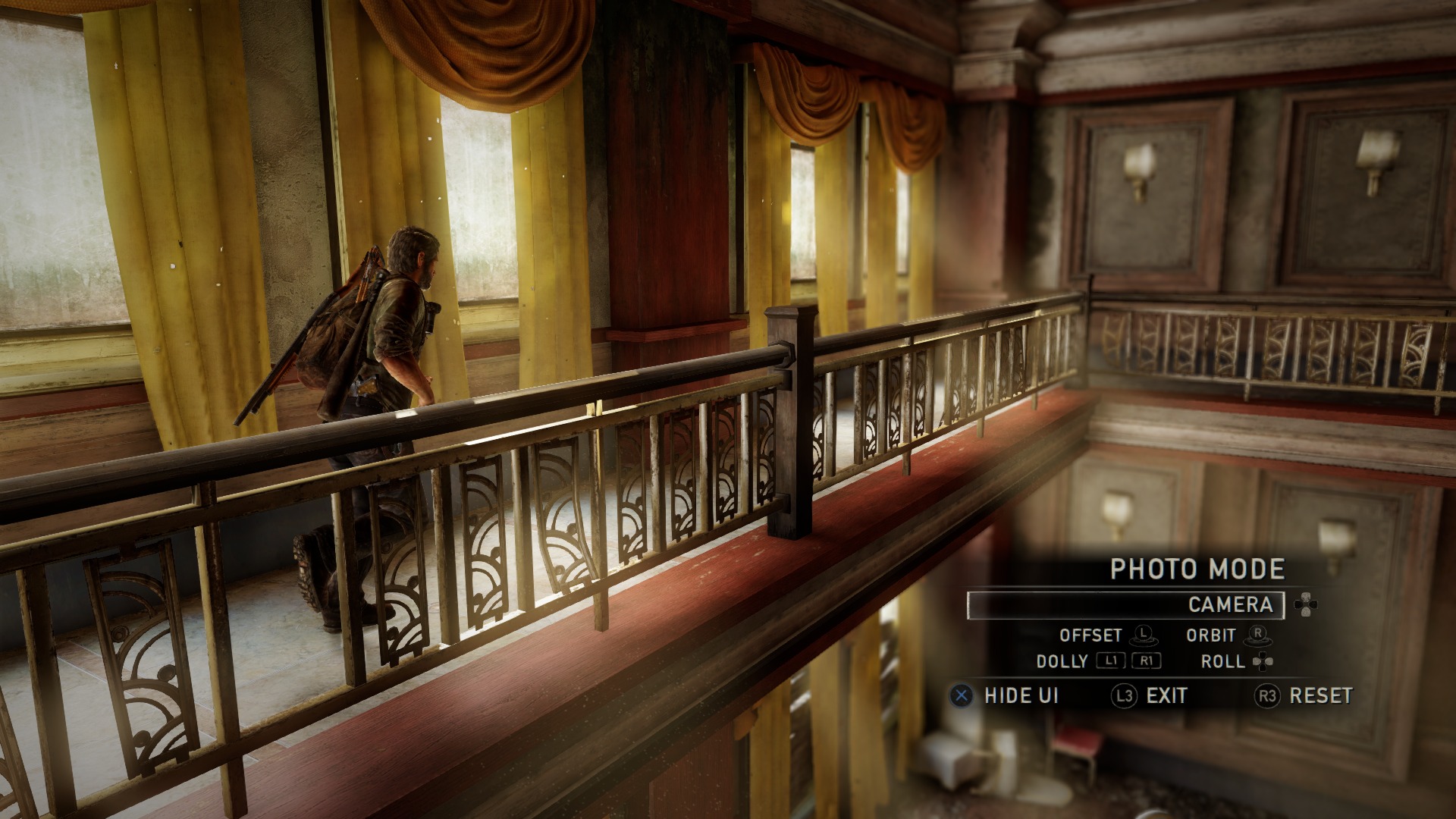 The basic camera controls are an improvement on Second Son’s, too, ironing out some of the quirks that could occasionally hamper composition. But it’s still limited in the sense that your camera revolves around Joel, the protagonist, without much freedom to break away from his position. Naughty Dog did consider implementing a free camera that let the player fly anywhere, but decided against it for technical reasons. "The thing is, every video game is composed to some degree of smoke and mirrors," says Gregory. "What you see when you’re in the main play path of the game is very detailed but the things that are farther away, by necessity, are less detailed. And so we didn’t want you to get into a situation where you’re really breaking the reality of the game." The team does have some ideas for how control might be expanded, however, with Gregory saying, "There were a number of ideas that were rolled around that we might try in the future."

"We’ve been surprised at some of the shots that people get. We look at them and say 'Wow, is that even in our game?!'"

While The Last of Us’ photo mode improves on Second Son’s in many ways, the latter game is a more natural fit for photography by virtue of its open-world design. If you see anything in the distance when exploring Second Son’s Seattle, more often than not you can travel there yourself and get a photo; The Last of Us, on the other hand, is a more directed experience that guides you along a linear path. But that’s not to say that you can’t use the mode to pull off some original pictures. "We’ve been surprised at some of the shots that people get," says Gregory. "We look at them and say "Wow, is that even in our game?!" Kovalovs adds that the mode also works as a showcase for the game’s remastered graphics. "When you play the game through, you don’t look at Joel’s face because you usually see him from the back, but when you rotate around him you realize ‘Oh wow, this actually looks amazing!’"

Naughty Dog has been surprised with the feedback that the feature is receiving so far. "If you guys are posting cool shots, we’re noticing it," says Gregory. And from his comments, it sounds like there’s a good chance of a photo mode making its way into the studio’s upcoming Uncharted 4: A Thief’s End, due out next year for the PS4: "It’s hard to say for sure, but it does seem like a popular feature so I don’t see any reason why we wouldn’t want to include it." The debate may rage over whether video games can be sports, but can they be photography too? That’s a question we may start to hear more often.