Michael Bastian partnership could be a winner

Fashion designer Michael Bastian is partnering with HP and retailer Gilt to sell a smartwatch this fall. Described by Gilt as a "Michael Bastian smartwatch engineered by Hewlett-Packard," the timepiece couples a circular face with a fairly aggressive sporty design. Although its shape bears a small resemblance to the Moto 360 smartwatch, its 44mm face is far more inline with traditional watches than Motorola's. It'll launch with a selection of straps in brown leather, black rubber, and green nylon. The watch will be able to receive notifications for things like emails, texts, and sports updates. It'll also offer music controls and display weather forecasts.

Given how basic its function set is, it's unlikely that Gilt will be positioning this as anything other than a high-tech fashion accessory. The watch will support both Android and iOS, and will be controlled via an app. Because of the watch's cross-platform compatibility, it's clear that, rather than relying on Google's Android Wear smartwatch platform, HP is developing its own software. The company's approach seems similar to Pebble's, with the majority of customization happening through a companion app instead of on the device itself. 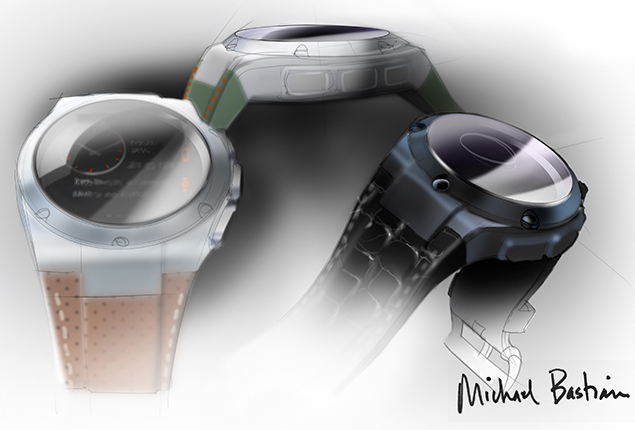 According to Fashionista, HP instigated the unlikely partnership by reaching out to Gilt with the idea of working with a fashion designer on a smartwatch. From there, Gilt brought Bastian on board, who handled the industrial design while HP worked on the tech inside. There are no details on how much the as-yet-unnamed smartwatch will cost, but Gilt has a teaser page where you can register for updates. Can HP succeed in creating the hardware, software, and applications for a product after relying on third-parties for so long? We'll find out this fall when its new watch goes on sale exclusively at Gilt.