Earlier this week, there were no plans to repatriate either of the two known Americans infected with ebola in West Africa. That's abruptly changed; there are now reports that at least one of the patients will be flown to Emory University Hospital in Atlanta.

JUST IN: State Dept. says evacuations of Ebola-infected Americans to U.S. "will take place over the coming days"

The university hospital doctors are confident they can contain the disease in a special facility operated in conjunction with the federal Centers for Disease Control and Prevention designed to treat serious infectious diseases.

"We are fully prepared for this type of situation," the university said in a statement. "Physicians, nurses and staff are highly trained in the specific and unique protocols and procedures necessary to treat and care for this type of patient."

The isolation unit where the patient will be placed is "physically separate from other patient areas and has unique equipment and infrastructure that provide an extraordinarily high level of clinical isolation," the hospital says.

The patient will be transported in a private jet equipped with an Aeromedical Biological Containment System, according to CBS, which is a "portable, tent-like device" inside a modified Gulfstream. The plane left Georgia yesterday headed for Liberia. 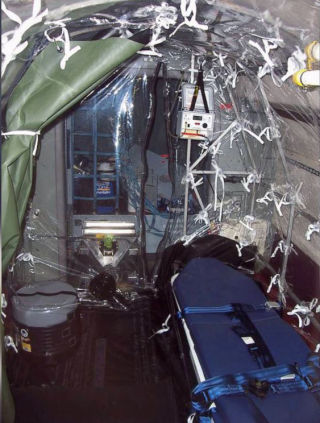 The current ebola outbreak, the worst in history, has claimed 729 lives with no signs of showing down. The two Americans infected were Dr. Kent Brantly and Nancy Writebol, who both worked at an ebola clinic in Liberia. The identity of the patient who will be transported to the US first has not been released.

Transporting ebola victims out of the country presents logistical as well as ethical challenges. Ebola is passed through contact with bodily fluids and is highly contagious. The current ebola mortality rate is around 55 percent, although health officials say the disease may be less deadly if treated in more developed countries.

Even though there is no cure for ebola and treatment is solely through "supportive therapy," meaning keeping patients hydrated and treating secondary infections, hospitals with more resources are better equipped to help patients fight the disease. For now, the virus is limited to Guinea, Sierra Leone, and Liberia, three of the poorest countries in the world.

"The State Department is the lead for the evacuation procedures and is working to ensure a safe entry into the United States," a spokesperson for CDC tells The Verge. "CDC is providing assistance is the form of the containment system, which is a portable, tent-like device that is being used in an aircraft for the evacuation. This system provides a high level of protection for medical staff and air crew who will be traveling with the patient."