The technology works, but the business model doesn't

Share All sharing options for: PlayStation Now is a glimpse at the future of gaming — for a price

"Honey, can you turn off Netflix? I'm trying to play Twisted Metal."

In my life, I never thought I'd utter those words. But that's the future, according to PlayStation Now — that's the name for Sony's streaming games service that launched this week in open beta on PlayStation 4. The "Netflix for games" truly is the future of gaming — but that future comes with a whole new vocabulary of gripes and concerns, all of which will be familiar to anyone who uses Netflix.

PlayStation Now is a cloud gaming service that lets you rent games by the hour, day, week, or month. There is no processing done locally on a game console or computer; you're essentially streaming the game from a server far away, with your button presses passing from the controller through the console to the server. PS Now isn't the first service to do this — OnLive debuted years earlier, and its former rival Gaikai was bought by Sony to power Now — but it's certainly the first home console to bring the technology to a wider audience.

The library of games currently consists of selections from the PlayStation 3 (the PS4 isn't otherwise backwards compatible, so this is the only way to play last-generation titles on the latest console), so I loaded up Ninja Gaiden Sigma. If lag was going to be an issue, Ninja Gaiden would prove it: it's a twitchy, frenetic action title where every button press makes a difference. In the office (23.20Mbps down, 18.38Mbps up), lag wasn't an issue at all: not only did the game work, but it felt very responsive. Saved game files remain tied to your account even after the rentals expire, and online multiplayer works smoothly.

Sony recommends a connection ranging from 5 to 12Mbps

But that was office internet, which is almost twice what I get at home. Connection speed plays a huge role, and Sony's acutely aware that it'll be the biggest issue. (The company recommends a steady broadband internet connection ranging from 5 to 12Mbps.) Each time you load up a game, the software tests your connection speed to see if it passes the minimum bar to work. (You can get more detailed information on download / upload speeds from PlayStation 4's network settings menu.)

Game after game, PlayStation Now held its own. Twisted Metal, Dead or Alive 5, Darksiders II. For better or for worse, the games play exactly as you remember, including terrible load times (Ninja Gaiden) and unskippable, minute-long cutscenes (Killzone 3). Those were annoying back then, and they're especially annoying now when I'm paying for both games by the hour.

Technically speaking, the stream held up and the latency was a moot point, so that's when my girlfriend and I decided to try and break it. First we loaded up Netflix to watch something in HD, and it held up really well aside from the screen occasionally artifacting. While my Dead or Alive fighter was somewhat blurry, I could still block and counter and win matches. It wasn't until we loaded up a second simultaneous video stream — Twitch Plays Pokemon — that we finally broke it. Button presses would register late or more likely not at all. The screen would tear in ways that felt like postmodern art. And then about five or ten minutes later, after what I imagine was a serious fight over bandwidth between three competing streams, everything somewhat leveled off to varying degrees of fidelity (but still ultimately playable). 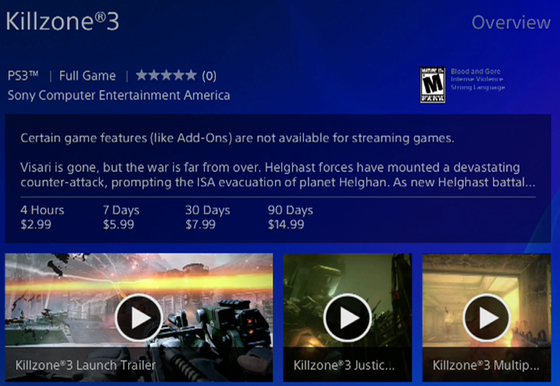 It's impressive that it held up that much for that long, but more than lag, its big problem is the price. As Polygon's Chris Plante lays out succinctly, the cost of rentals can be absurdly high for years-old games. Some titles cost as much as $4.99 for four hours of play. Hours. Likewise, Final Fantasy XIII-2 costs $29.99 for 90 days of use, but it's only $20 to pick up a physical copy from GameStop and own forever. If Sony wants PS Now to be the Netflix of games, then it really needs to figure out a similar business model.

But if Sony can figure out a sustainable cost structure (hopefully by way of a subscription service), then what Now represents is a proof-of-concept for the future of games. You won't need a console to play the latest and greatest. It might be baked into your TV or even playable from your phone or tablet. That's the trajectory we're heading on — a future where all media is streamed from servers to screens in your home. All you'll need is a decent internet connection, but that's a much larger debate.