After auditioning on Kickstarter, hardware startups raise hundreds of millions

The crowdfunded cash is just the beginning

Share All sharing options for: After auditioning on Kickstarter, hardware startups raise hundreds of millions

Travel back in time to 2008 and life was very different for inventors and entrepreneurs who wanted to launch a new piece of hardware. Unlike a new mobile app, it can take millions of dollars in development costs before a gadget makes it into the hands of the first consumer. Since venture capitalists were wary of investing in anything that didn't have proven traction with an audience of early adopters, it was difficult for small, independent developers to find outside funding.

The rise of platforms like Kickstarter and Indiegogo has changed all that. With a working prototype and a slick demo video, hardware startups have raised tens of millions of dollars in pledges from people who want to be among the first to test their device. It's created a new paradigm around development and given us products like the Pebble, Ouya, and Oculus Rift. Today CB Insights, which analyzes venture-capital funding, has released a new report which found successful hardware projects from Kickstarter and Indiegogo have raised a whopping $321 million in outside capital. 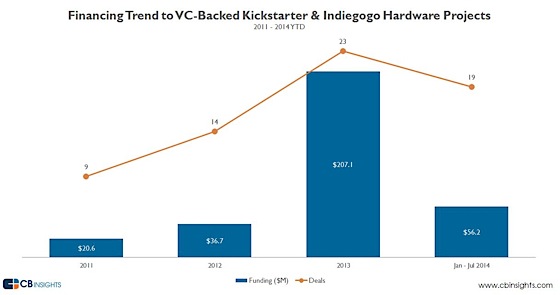 CB Insights looked at 443 successfully funded projects that raised over $100,000. Of these, only 42 projects, or about 9.5 percent, went on to raise venture capital. In total those 42 companies had raised $45.6 million on Kickstarter and Indiegogo, meaning that they took in about seven times as much money from professional investors as they did from their crowdfunded fans. As Adrianne Jeffries noted last year on The Verge, Kickstarter is a much bigger platform with a higher project success rate. The same holds true for follow-on funding, with Kickstarter projects raising more than five times as much as their Indiegogo counterparts.

"I would have bought a few shares of Oculus rather than my now-worthless $300 obsolete VR headset."

The massive success of these projects after they graduate from these crowdfunding platforms has generated criticism among some of the backers. When Oculus sold to Facebook for $2 billion, for example, many supporters were upset. It felt like a independent project that had asked for their help was now cashing in, and that the people who had given money to make that possible weren't seeing any of the reward. "I would have bought a few shares of Oculus rather than my now-worthless $300 obsolete VR headset," wrote backer Carlos Schulte.

But these complaints don't seem to have slowed down the cycle of giving and funding for new hardware startups. Although the total amount of capital raised may be less, unless we see another massive round like the $75 million Series B that Oculus did last year, CB Insights' research found that 2014 was on pace to see 40 percent more funding deals than 2013.