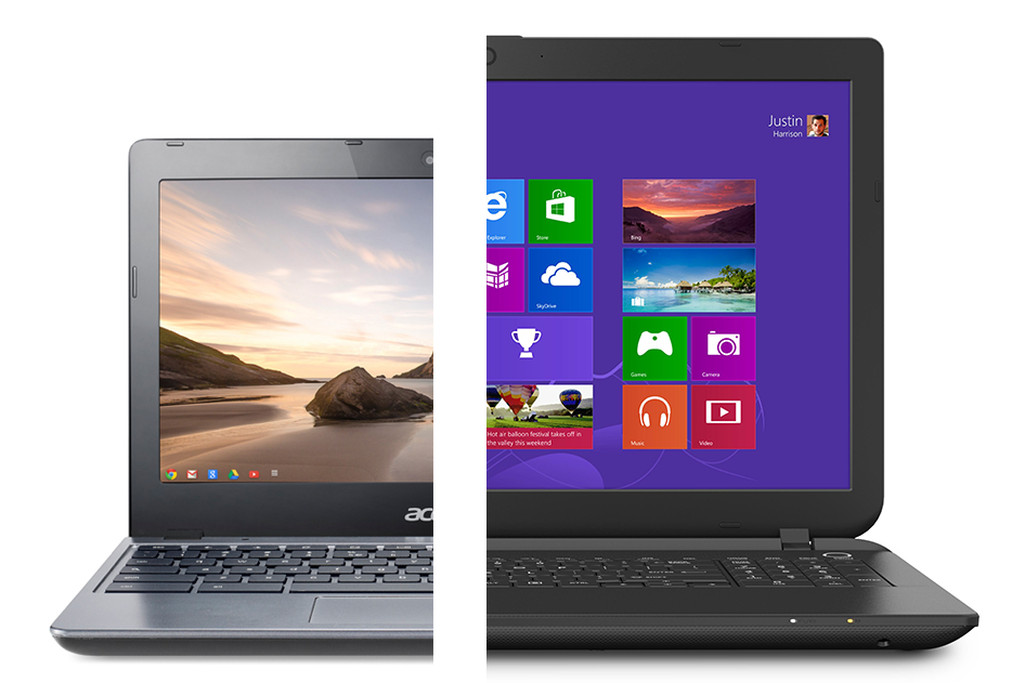 I’m currently typing on the new Acer C720 Chromebook with Intel’s Core i3 processor. It’s the sixth or seventh Chromebook I’ve used in the past year, each one slightly better than the last.

The new C720 is a fine Chromebook (though I’m not convinced it’s really worth its $379 sticker price). It runs the Chrome OS operating system, a much simpler platform than Windows or OS X, and can handle multiple tabs, streaming video, and web-based gaming without much issue. It’s ever-so-slightly quicker at loading webpages thanks to its faster processor, and it can chew through web benchmarks quicker than ever. It’s still got the clacky keyboard, terrible display, tinny speakers, and ugly industrial design of the previous C720, but it’s fine for what most people expect a Chromebook to do.

But being the best Chromebook yet doesn’t do much to move the needle in the notebook world. Chromebooks have had success in the education space, but for consumers, they’re still far behind Windows laptops. According to data from industry research group NPD, Chromebooks have grown to 6 percent of consumer market share in the US since 2011. Contrast that to Windows laptops, which still make up 73 percent of the market and Mac laptops, which have grown to 21 percent from 17 percent in the same period. While Chromebooks may work fine as a secondary computer for those with larger and more powerful machines that act as daily workhorses, they still don’t fill the needs of the average consumer looking for a single computer.

Based on the data on what people actually buy, it’s apparent that the small size, mobile-first mindset that virtually every Chromebook worth buying encapsulates just doesn’t matter to the average laptop buyer, the one that just wants to buy a simple, single computer for $400 to $600.

"Screen size is the no. 1 factor in the entry-level market."

"Screen size is the no. 1 factor in the entry-level market," says Stephen Baker, vice president of industry analysis at NPD. "Most buyers don’t carry [laptops] far from their desks and the three- to four-hour battery life that an entry-level model has is enough for their needs within their home." He notes that a 15-inch laptop strikes the right balance between screen size and portability for the vast majority of consumers, while still being affordable for the mass market. That’s why when you walk into the laptop section of any big box store, you’ll see a variety of Windows 8 notebooks with one major recurring theme: big displays. Best Buy and Walmart both list over 50 different Windows 8 laptops priced under $500 with 15-inch or bigger displays on their respective websites. (Despite the decline of big box retailers in recent years, most people are still buying their computers in a retail store. NPD says that though Amazon is obviously very strong in a number of categories, PC sales is not one of them.)

In the first six months of 2014, 15-inch laptops accounted for 69 percent of consumer Windows laptop sales in the US, according to NPD data provided to The Verge. (17-inch laptops take another 12 percent of sales.) Forty-eight percent of those 15-inch laptops were priced between $300 and $500, right in the sweet spot (or just above) where the best Chromebooks are already priced.

Sure, these laptops are likely not very good, with low-resolution screens, weak processors, bad trackpads, terrible battery life, and chunky designs. They provide a pretty poor user experience with Windows 8, which works best with higher-end hardware and a touchscreen, or a good trackpad at the very least.

But you won’t find any Chromebooks competing directly against these ubiquitous Windows laptops. The best Chromebooks, the ones that can actually handle working with multiple tabs and streaming video without being an exercise in frustration, have small, 11- or 12-inch displays. There are a handful of 13- and 14-inch models on the market, but there isn’t a 15-inch Chromebook anywhere.

That’s a shame, because the type of customer that would likely benefit the most from a Chromebook isn’t even considering one when they walk into a store. Chrome OS is incredibly simple and easy to use, and any person that’s computer literate can pick it up and run with it. It turns on almost instantly, offers the same experience as the Chrome browser that many are familiar with already, and requires virtually no management from the user. And Chromebooks are already really cheap, with decent options starting as low as $179. Compare that to Windows 8, which has proven to be terribly confusing to most people accustomed to older versions of Windows, especially on devices that lack touchscreens and aren’t really designed to work with it.

Certainly, there are other things that can and will hold back the average consumer from buying a Chromebook right now. Even the cheapest Windows laptops typically come with 500GB or more of storage space. The 16GB of standard Chromebook storage won’t get you very far in comparison. Those cheap Windows laptops all also have built-in DVD drives, which some customers do still look for. But neither of those are as important as screen size and are evidence that Google still has a lot of work to do to educate the average consumer on Chromebooks.

The C720 is a fine Chromebook, but it's not the right computer for the majority of people

This brings us back around to where we started: the new Acer C720 is a fine Chromebook, but data shows it’s not the right computer for the majority of people looking to buy an inexpensive laptop for their primary computing needs. It’s just too small. (The same can likely be said for the new Acer Chromebook 13 with the Nvidia processor, but we’ll reserve judgement on that until a review unit is in our hands.)

If Google and its Chromebook partners want to walk away with the cheap laptop market, the bread and butter of Windows, all it seems they have to do is make bigger Chromebooks. Google and its partners could simply put Chrome OS on one of their larger Windows designs and swap out the slow hard drive for a smaller, but faster, Chrome-appropriate SSD. Chromebooks are already doing everything except the one thing they need to do: be bigger. Baker says that’s something that will likely happen at some point. "I think it’s just a matter of time before we see 15-inch Chromebook options."

That doesn’t mean it will be a cakewalk for Google: Microsoft has already announced plans with its partners to dive headfirst into the ultra-cheap market, with sub-$300 Windows notebooks coming very soon. Many of those will likely have 15-inch screens, if history is any indicator. But if Google is able to enter the conversation and provide an option for those wanting a bigger laptop, it at least stands a chance.

Was anyone really asking for a faster Chromebook? No, I don’t think so. But the data show that plenty of people are asking for bigger laptops, if not specifically bigger Chromebooks. Make it happen, Google.