It’s been four years since Stewart Butterfield last sent an email to a work colleague. His team long ago replaced email with a chat app that plugged in to all their favorite services like Twitter, GitHub, and Dropbox. It worked so well that, when Butterfield’s game Glitch went under, his company decided to launch their chat app to the world and reboot their company.

Slack users spend nearly 10 hours in the app every day

In the six months since launch, Slack, as the app’s called, has been growing at a breakneck pace. Over 125,000 people use the app every day, among them 13,000 teams at companies as large as eBay, Sony, Yelp, and NBCUniversal. Active user numbers are expected to double by year end, but more importantly, engagement is off the charts, with users spending nearly 10 hours logged in to the app every day. "Slack is so beloved that some companies have begun mentioning it as an employment perk alongside on-site massages and bottomless bacon-tray Fridays in their job listings," reads a recent profile of the company in Wired.

Butterfield’s last startup, Flickr, also began as a side project but ended up changing photo-sharing forever. With Slack, it seems he’s found his latest accidental success. He spent a few minutes speaking to The Verge about the future of email, Microsoft’s failure to adapt to the 21st century, and why it’s not so strange to use 10 different apps to talk to your friends.

This interview has been edited for brevity and clarity.

Yes, for a lot of three-person teams, a lot of 10-persons teams, and a lot of 100-person teams. It’s all or nothing. If half of your team was not on it, then the whole team would stop using it pretty soon.

We can’t say [how many have left email entirely] with any precision, but we get lots of tweets saying [a person’s] individual email volumes have been reduced by x percent. Sometimes it’s 80 sometimes it’s 50. We’ve definitely seen tweets saying "We’ve stopped completely." This is the app you have open all day everyday alongside what your task is. In your other window might be Google Docs, Salesforce, Excel, whatever it is, but Slack is the one thing you’ll have open all day if you want to reach someone in your team.

Was Slack originally designed as an email replacement?

Everyone complains about email, and there are various solutions to solve it. There are so many plug-ins like Xobni or different clients, you see a lot of those as well. There’s something intrinsic to communicating with a larger number of people that’s going to be difficult to manage, especially given the amount of information we get. Email has gotten worse over the last 10 years or so. Ten years ago, 50 to 60 percent of email was from another person, and now it’s 8 to 10 percent. The other 90 percent is from a machine — email marketing, receipts, new Twitter followers, Facebook comments, check-ins, monthly statements, blah blah blah. 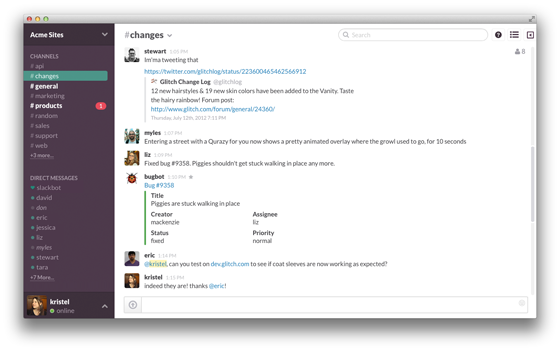 When I open my email it’s a giant casserole of email from family, friends, people we work with outside our organization, and all those things I just mentioned. It’s garbled. One of the advantages of something like Slack is that I tap on the app icon and it’s just the people at my company, and just the people I work with. There’s a strong boundary there which aids in comprehension. It’s one less molecule of glucose in my brain to manage it all. But it adds up.

That was one of the big insights for me when I switched to Gmail — they had conversations which made life easier, more storage, and finally it had good search. There wasn’t good search in email before that. And search isn’t just useful after the fact. It’s useful while you’re doing email. Back at Yahoo I had to decide which folder I wanted to put things into, and we had limited email space. Now you archive everything and know you can search for it again. We’re trying to do that at a team level.

Slide from @SlackHQ update deck. I have never seen viral enterprise app takeoff like this before--all word of mouth. pic.twitter.com/oTkUDAQbXX

Slack’s third-party app integrations give it a real contextual edge over both chat apps and email apps. Were they always a part of the plan?

Absolutely. We started the company five years ago to make an MMO game. We used IRC to chat because when we started there were four of us. This wasn’t an ideological decision, it just evolved that everyone used IRC to communicate. But rather than getting database alerts via email or stat reports on today’s sales or alerts about new files on file servers, we started pumping all those things into IRC. And suddenly we realized, when the game shut down, that none of us are going to work without a system like this again. So we started Slack. 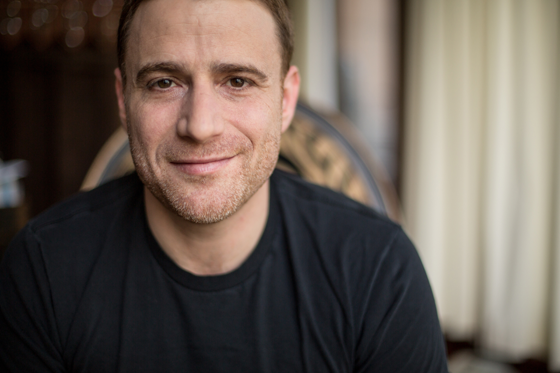 Fifteen years ago most software products were provided by Microsoft. At my first job in the mid-to-late ’90s, almost every product was from Microsoft. Everything was designed to work together — Windows for workgroups, shared M drives, etc., etc. Fast forward to now and Microsoft is a much smaller piece of the picture. This is good for most businesses in that they get their choice in every product category: CDN, source control, customer support, product management, analytics.

The drawback from the perspective of customers is that their data is all over the place. We use ZenDesk for customer support and also talk to a lot of people on Twitter. We also use GitHub for source control, and we have all these internal tools. We get 3,000 to 4,000 messages from human beings, but 10,000 to 20,000 messages from external services. And now we have one search box that lets us search all of that. Searching for a bug report is easier within Slack.

This wasn’t clear when we started working on it, that there was a huge advantage to having a neutral platform where not just humans but external systems can post messages. It’s an accessible, canonical central archive that’s also searchable.

"There [is] a huge advantage to having a neutral platform where not just humans but external systems can post messages."

Okay, so Slack is sounding less and less like a chat app or email app. What is it, really?

We go back and forth on our own one-sentence description. When we talk more evocatively we say "It’s all your communication in one place, instantly searchable, and available wherever you go." On the marketing side we give a more concrete description like "It’s a messaging and search platform that creates a single unified archive accessible through powerful search."

Our ambition is that it’s a foundational bit of technology for most teams. Whatever it is that they do, sales, tech development, editorial, or even in medical device manufacturing, every team has to communicate with other people, and messages are flying around everywhere.

The advantage of centralizing that — even if you forget search or iOS apps — the idea of centralizing that is a huge value over having messages fragmented into different inboxes. When someone joins your team next week, they will have historical archives available to them that they can fall back on, as opposed to starting at a company and having an empty inbox.

Dear @SlackHQ please think about email integration. You did great job reducing my email traffic by 90%. Just finish it.

Email is one of the most important "external services" people use, have you considered integrating it in some way?

Email is not going away anytime soon, but one of things we’re working on is better integration with email. We want to handle all our communication. We’d never make Slack an email client, but it’s good to support sending emails into it. There’s quite a bit of formatting you can do. When I get an email from the outside world that I want to share with team, I cut and paste it into Slack. But really I should be able to import that email as an object.

How do you address the differences between email and Slack? Email allows different threads for different, dated conversations, while Slack is just one big thread between you and others.

We are working on message replies, which could help with asynchronous conversations you open again after a long interval.

Email is the lowest common denominator. It’s the way you get communications from one person to another. There isn’t really an alternative. Sometimes people will have Facebook messenger turned on, but 99 percent of the time if you’re sending a message to a human you don’t know well you’re using email.

Our office now uses Slack (@SlackHQ) for team communication. Amazing tool. Replaces all Skype, much email, and some Basecamp.

In the last seven years, with the massiveness of Facebook and the introduction of real smartphones with the iPhone, most people now have different subsets of contacts they don’t communicate with primarily through email. I use [Google] Hangouts with three people, and iMessage with four to five people, and Twitter for a few people, and a much smaller group of friends with email. All work conversation internally is through Slack. It’s not something people are conscious of. If you asked bunch of colleagues about how they communicate with their spouse or children or high school friends or poker friends, it’ll be different apps in different modes for different people. People are getting more and more used to it.

This is one of the reasons Slack was able to take off. People are willing to accept one more framework — another app for communication with a specific subset of people.

How does Slack’s usage compare to other chat apps and social apps?

The [metric] we track most closely is our daily active users, because if people aren’t using it every day it’s not really being used. In the context of a Facebook it’s a minuscule number, but in the context of professional apps it’s probably the fastest-growing enterprise, software-as-a-service thing ever. We actually tried to get that stat, that was gonna be our pitch. But we didn’t know how we could actually establish it. It’s hard to back up. We have 125,000 daily users — people who open the app and read at least one message. They’re in there for hours every day.