As it cracks down on copyrighted songs, Twitch embraces live-streaming musicians

Share All sharing options for: As it cracks down on copyrighted songs, Twitch embraces live-streaming musicians

The electronic musician Porter Robinson released his new album, Worlds, yesterday. This afternoon he'll launch his own channel on Twitch, the live-streaming platform best known for broadcasting video games. For three hours Robinson will hang out with fans on Twitch, discussing the video games that inspired each track and showing viewers around his recording studio and gaming space inside his North Carolina home. It's part of a broader trend on Twitch, which is branching out from its focus on video games to give musicians a spotlight on its platform.

Aoki turned the chat room into a virtual dance party

Over the last few weeks Twitch has seen a number of big-name artists embrace its service. Mad Decent, the label behind Diplo, Dillon Francis, and others, launched a Twitch channel where artists chat with fans as they game. Darude played the after party for a major gaming tournament live on Twitch and Steve Aoki hosted a DJ set that turned the chat room into a virtual dance party. Twitch is promoting these artists on its front page and social media channels, but the newfound kinship with musicians comes at an interesting time, with Twitch also cracking down on the use of copyrighted songs in its archived videos.

The result can sometimes be awkward. On the channel for Mad Decent, a video, titled "Snipe on the Drop," was meant to showcase someone playing video games in time with the beat of a song. That may have worked live, but the archived version on Twitch is eerily silent, bearing the message "audio for portions of this video has been muted, as it appears to contain copyrighted content owned or controlled by a third party." Twitch invites record labels to play their music over video games, but then can't play back that audio because it doesn't have licensing deals in place. 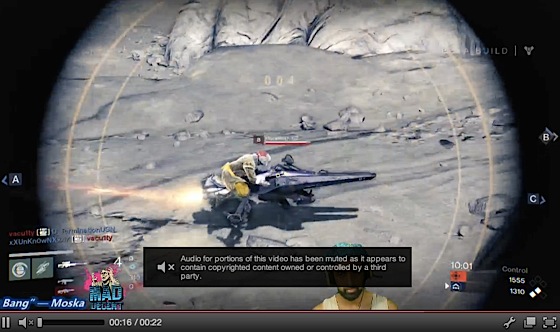 This is likely going to be a short-term dilemma. Twitch is reportedly in the process of being acquired by YouTube, which has worked out licensing deals with the vast majority of record labels. Twitch has already tried to impose limits on how much video users can archive on its platform, and it's likely that if the two companies merge, Twitch will handle the live streaming and YouTube will serve as the on-demand archive.

"There has been a long symbiotic relationship between video games and recorded music."

In the meantime, there may be something more interesting happening at the intersection of music and video games. Twitch, which spun off Justin.TV, has long placed its sole focus on serving the gaming community. But in a recent survey of its users, Twitch learned that more than 80 percent were interested in seeing live music as well. The recent performance by Steve Aoki drew more than 250,000 unique viewers who exchanged over 182,000 messages during the concert.

"There has been a long symbiotic relationship between video games and recorded music," said Aoki. "With the gaming industry now doing live broadcasts on Twitch, it makes sense to bridge these two cultures with live music." It was good business for Aoki, with more than half the clicks on the preorder link for his new album coming from the Twitch broadcast.

Twitch was careful to say in its press release for the Porter Robinson event that its main focus is still on serving the gaming community. But it may not have to change much about its current format in order to be a powerful tool for musicians looking to connect with fans. More than half a million people have already spent time watching Limp Bizkit's Fred Durst play through the Destiny beta, where he spins some of his favorite tunes and chats about music and video games in equal measure.

For the Porter Robinson event this evening, the marriage of music and video games runs much deeper. "My album 'worlds' was definitely inspired by the ideas of fiction, fantasy, and escapism. I think much of my love of those themes came from the games I was playing when I was younger, many of which were MMORPGs. And when a few of my favorite MMORPGs essentially died, that romanticized the notion of worlds and fictional places even more to me," he told The Verge. "For the Twitch stream, I'm going to wander around a few of my favorite virtual environments while streaming the record. I'm hoping it'll give people a sense of what inspired the album."